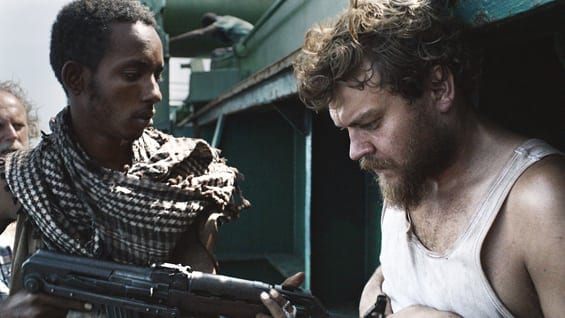 Review: “A Hijacking” draws a riveting thin line between corporate and oceanic pirates Sweaty, working-class survival collides with the chilly corporate bottom line in the Danish film “A Hijacking.” It’s a riveting piece of work, starting with a shrewd decision in its first act.

Given the title, we’re pretty sure what’s going to happen to the Danish ship the Rozen as it travels to Mumbai via the Indian Ocean: pirates! What’s surprising is that, after introducing us to the blue-collar skeleton crew manning the Rozen, writer-director Tobias Lindholm doesn’t show us the ship’s takeover. Instead, we cut to the shipping line’s brutally stylish headquarters in Denmark, where word comes that — oops — something seems amiss on the vessel. We go back, then, to the Rozen, where Somali rogues are already in place, poking their machine guns into crew members’ chests and barking commands that no one understands. (The movie smartly doesn’t subtitle this dialogue, making us share the crew’s confusion and panic.)

We have two focal characters. On the ship, it’s the cook, Mikkel (Pilou Asbæk, who looks like Michael Shannon’s European brother). He’s the chosen go-between for the Somali boarders and the company’s chief executive officer in Denmark, Peter (Søren Malling), the other main protagonist. The pirates demand $15 million in ransom. But we’ve already seen Peter strong-arm some Japanese businessmen from a $21 million deal down to under $15 million. He and his well-dressed henchmen approach the hijacking as just another fiscal negotiation, even though lives are in the balance.

In other words, “A Hijacking” is not an adventure on the high seas but a ruthlessly cool examination of the way big money gambles against what management considers small lives. (The upcoming Tom Hanks vehicle “Captain Phillips” is based on a true-life case of piracy; but while “A Hijacking” is fictional, I’d bank that it smells much more like real life than the inevitable “uplift” the Hollywood product is sure to be peddling.)

Bouncing back and forth from sea to shore, the movie updates us on time’s passage with some startling captions: Day 1. Day 39. Day 127. For the suits in Denmark, each of these is just another date in the workweek. But aboard the Rozen, every passing day is an ordeal that alternates between terror and almost surreal camaraderie with the captors. (A bit of “Stockholm syndrome” plays out on the ship, but mortal danger is always only a hair trigger away.) The film’s contrapuntal rhythm actually works. Though you’ll get its main point pretty quickly, this isn’t some dry thesis. It’s an engrossing drama that sticks with you.

Asbæk makes for a good everyman, stubbly and shaggy even before he and his crew are deprived of showers and toilet privileges. He’s a loving husband and father, and the hell he undergoes strikes home. Meanwhile, Malling manages to do something very difficult: he makes Peter both repulsive and weirdly sympathetic. (The movie includes an angry breakdown scene with his wife which, honestly, it doesn’t need; Malling’s controlled performance is enough to convey the essentials.) The two leads are well supported by Abdihakin Asgar as Omar, the educated, English-speaking intermediary who represents the pirates in telephone negotiations with Peter. His easygoing, it’s-just-my-job attitude is insidious and chilling.

In the end, “A Hijacking” strongly suggests that desperate madmen with automatic firearms aren’t nearly as dangerous as men in expensive threads whose only concern is for corporate profit.