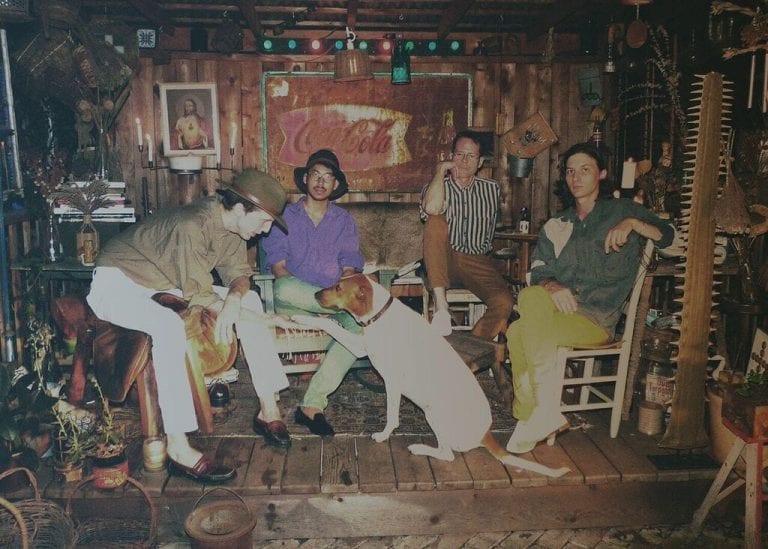 Review: Deerhunter at their best, and wildest, with expanded set at Variety Playhouse

Despite it being Deerhunter’s second show at the Variety Playhouse just this year, the set on April 11 was a world away from the show they played in January. Following the ambient, droning light textures of the Bitchin Bajas and the fast-paced rock of the Subsonics, Bradford Cox’s Atlanta-based art-rock veteran troupe put on a performance sure to be remembered by the Deerhunter faithful in Terminus.

Aided by two additional band members — new percussionist Rashaan, and Javier Morales on keyboard, saxophone and tapes — Deerhunter’s songs took on an operatic, expansive texture. Songs from the classic “Helicopter” (which Cox endearingly dedicated to his mom) to the looping tracks on their new album Fading Frontier were heady and engrossing, taking on the bright roughness that comes with the best live performances. It was like every song was on overdrive, beautifully ready to pour out past its standard track length and ooze through the swaying crowd. This six-member version of Deerhunter is an upgrade on the classic quartet that doesn’t forsake the energy and weirdness that has made the band local and national favorites. This set showed what Deerhunter is capable of, now seven albums and 11 years deep, when they allow themselves to continue to push their own boundaries. With long, shimmering intros and songs that digressed into epic jam sessions, the added textures of the percussion and saxophone revamped the old and new songs alike, filling out the sound and the space of the performance.

It didn’t hurt that the lighting and sound at the Variety Playhouse were on point this past Monday. The lights bathed the crowd in psychedelic swirls and high-pitched strobing, in-turn amplifying the narrative energy and lyric intelligence of Deerhunter’s songs, both unifying the no-frills space of the venue and transporting us all into Cox’s vibrantly textured musical vision. Watching from the upper balcony as giant shadows of Cox and Lockett Pundt appeared and disappeared from the walls of the Variety Playhouse, I was sure we’d all been transported to a Deerhunter-designed planet, complete with alien attendants. I ended up being not far off. Later in the show Cox asked, “Is our little druid ready?” before someone in a black hoody, reminiscent of the strange lurking druids in Neil Young’s concert-film Rust Never Sleeps, came out to play the chimes, face turned away from the audience, during the last song. Whether an intentional reference or not, like Young, Deerhunter’s performances thrive when they embrace the multifarious weirdness and shifting textures of all their albums together, forsaking repetition for performances that seem to give us new versions of every song.

If there have been any unfavorable reviews of Fading Frontier, I’m sure those reviewers’ trepidations would fall away after hearing a live performance. Sure, the new album is absent the noisy, DEVO-esque sounds of early tracks like “Adorno,” but the mesmeric pop textures of the new album are clearly anticipated by the Rainwater Cassette Exchange EP and Halycon Digest. With echoes of The Kinks and Sparklehorse, Fading Frontier strips pop music of its consumer appeal by reintroducing an urgent, unruly effect back into the sounds that transformed American mainstream music. Hearing them play “Living My Life” live, as they stretched out its joyful melody into a swirling freak out, it became clear that one would be hard-pressed to find a band that weds the raucous and ethereal better than Deerhunter. If you’re convinced tracks like “Snakeskin,” with its upbeat swagger and sharp lyrical critique of consistency and stability, make Fading Frontier a turn away from Deerhunter’s previous albums, then you’re stuck loving one identity of a band that’s clearly interested in undoing identity altogether. It doesn’t take more than seeing Cox’s parodic Hamlet-like handling of a skull in the beginning of the video for “Snakeskin” to see evidence of Deerhunter’s commitment to slithering out of the grasp of the music industry’s categories, even those categories that get deemed “experimental.”

Undoubtedly one of the best shows in Atlanta so far this year, including an encore performance of “Agoraphobia” and “Nothing Ever Happened,” Deerhunter proved once again that Atlanta has reason to celebrate its local music scene. Whether you’re into the fierce thickness of past versions of Deerhunter or the new transformation that includes an album cover with a John Divola photograph of a California sunset titled “Zuma” — a terrific play on the West Coast lineage of pop-folk legends — it’ll be smart to pick up a copy of Fading Frontiers and get weird, in overalls or not, on your own terms.