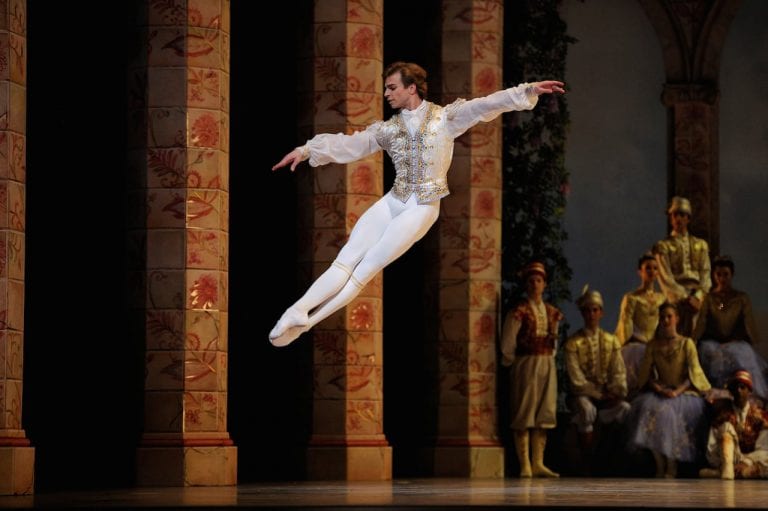 Alistair MaCauley of The New York Times described him as “a paragon of finesse.” Fan and dance blogger Terez Mertes Rose says he’s “an outstanding technician and classicist with pristine lines” and Vanessa Zahorian, his frequent partner since they both joined the company in 1997, says he is a purist with great clarity of style. “He is text-book perfect,” Zahorian says. “Everything is exact.”

Three years after joining San Francisco Ballet, Nedvigin was promoted to principal dancer and has danced lead roles in scores of ballets since then. Zahorian and Anita Paciotti, ballet master at the company, say he never expressed a desire to run a company and that his recent announcement was a big surprise. It’s not clear who approached whom about his moving to Atlanta, but Nedvigin and his family — a wife and young daughter — got to know the city and the company when he came here to set Yuri Possokhov’s Classical Symphony for Atlanta Ballet in 2014.

Nedvigin, 39, will be formally introduced to the media and Atlanta Ballet officials tonight. He was born in Russia and trained at the Bolshoi. “The Russian training gives him an iron framework because the Russians really believe what they are taught,” Paciotti says. “They never turn their back on it. In terms of technique — how to jump, how to turn — they are trained so thoroughly from such a young age it’s not something they are going to forget.”

Nedvigin has worked closely with Possokhov, a fellow Russian and resident choreographer at San Francisco Ballet; Nedvigin frequently stages (the stager works as the “approved voice” of the choreographer when the choreographer cannot be there in person) Possokhov’s ballets on other companies. He likely was involved in bringing Possokhov’s Firebird to Atlanta. The work will have its Atlanta premiere in the 2016-17 season.

Nedvigin and John McFall, who’s retiring as artistic director after 23 years, both danced with San Francisco Ballet, McFall for 18 years and Nedvigin for 19, although not at the same time and under very different artistic directors.

Under Helgi Tomasson’s leadership, San Francisco Ballet has become a foremost presenter of 19th century repertory such as Sleeping Beauty, Giselle and Swan Lake, along with 20th century classics including John Cranko’s Onegin and Balanchine’s Jewels. The ensemble also performs works by 21st century choreographers with a strong classical base such as Justin Peck from New York City Ballet and American Ballet Theatre’s Alexei Ratmansky — his Seven Sonatas was performed in Atlanta last season — and contemporary dance maker Mark Morris.

Both troupes have been around a long time, and split hairs over which is the oldest company. San Francisco Ballet, founded in 1933, is America’s oldest professional ballet company and Atlanta Ballet, founded in 1929, is the country’s longest continuously operating professional dance company. In the last five years, however, Atlanta Ballet has taken the edgier path with works such as Helen Pickett’s The Exiled and Camino Real, and Ohad Naharin’s Secus which ArtsATL’s Cynthia Bond Perry wrote is “in stark contrast to classicism … at once shocking and liberating.”

The big question now is, what will Gennadi do? Will he bring back popular but rarely performed classics like Coppélia, which Atlanta Ballet last performed in the 1997-98 season, or Balanchine’s Theme and Variations, last seen by Atlanta Ballet audiences in 1991? Will he introduce more of Possokhov’s works? Will Atlanta Ballet start looking more like San Francisco Ballet?

Neither Zahorian nor Paciotti were willing to guess what his vision for the company might be but whatever it is, he will have to build it on a much smaller ensemble than he’s accustomed to. San Francisco Ballet has 74 dancers and an annual budget of approximately $50 million. When the company does Giselle, it’s with seven different casts, a depth of casting that could only happen in an ensemble of that size. Atlanta Ballet has an annual budget of just under $10 million, 23 dancers and four apprentices. This presents an interesting challenge for the first San Francisco import, Possokhov’s Firebird, which was created for 36 dancers.

Unlike McFall, who spent four years as artistic director of BalletMet in Columbus, Ohio, and many years as a choreographer before joining Atlanta Ballet, Nedvigin is leaping straight from the stage to the helm of a major urban company. People describe him as warm, genial, respectful, friendly, meticulous, unthreatening and approachable with a strong work ethic. All admirable qualities. Still, he’ll have to undergo a sharp learning curve to master all the duties of an artistic director.

As for his relationship with the dancers, Paciotti says she hopes they will respect him. “He is kind, clear and helpful” in the studio, she says. “Not critical. Not hyper. Just straight forward and calm. You couldn’t ask for a better quality in a director or ballet master. He’s going to be a fantastic teacher, too.”

Paciotti imagines he’ll introduce the company to new ways of moving based on his very logical, “almost scientific” Russian training. “I think it’s going to be helpful for them,” she says. Atlanta Ballet’s dancers are individualists with diverse talents and training, and the company is loosely collaborative with no star system. Will Nedvigin will keep that quality or impose more uniformity for the sake of classics like Swan Lake?

“I think he’ll go for a broad spectrum of works, learning as he goes and as he gets to know his dancers,” Paciotti says. “Hopefully he won’t impose things upon them, but discover what they have and what’s right for them. “

Observers say Nedvigin is now at his technical peak. “I feel like it’s maybe not his time to retire,” Zahorian says wistfully. “But I guess it’s perfect to go out on a high note and still be amazing. This was just an opportunity of a lifetime. How could he not take it?”