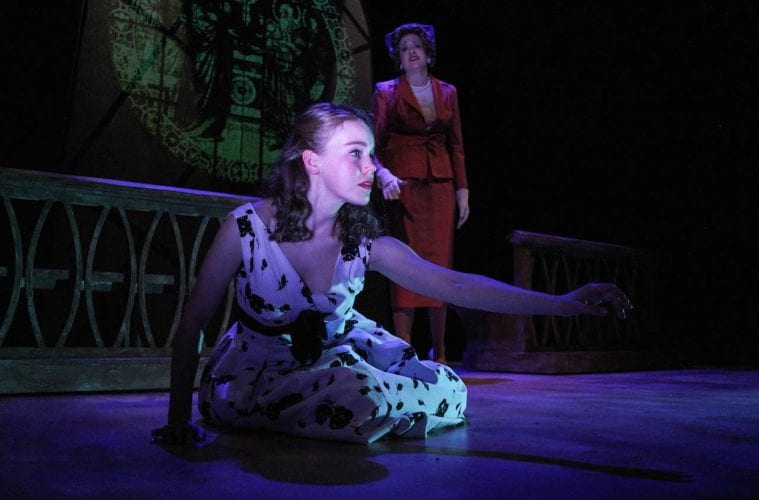 Review: With “The Light in the Piazza,” Theatrical Outfit turns on one of the year’s best musicals

As most theater companies in town near the end of their respective seasons, almost all have some sort of heavy hitter (or heavy hitter wannabe) in their lineup. It’s an incredibly busy time of the year and Theatrical Outfit is ending its 2015-16 campaign on a real high with the musical The Light in the Piazza, running through May 15 at the Balzer Theater at Herren’s. Buoyed by its excellent collaboration on Memphis with Aurora Theatre last year, this is another triumphant effort from the company. Musicals aren’t produced with the same regularity as plays at Theatrical Outfit, but perhaps they should be.

Adapted by Craig Lucas, the Atlanta-born writer behind the play Prelude to a Kiss and the film Longtime Companion, among others, The Light in the Piazza takes place circa 1953, where Margaret Johnson (Christy Baggett) a wealthy woman from North Carolina, and her daughter Clara (Devon Hales) are visiting Italy for the summer.

Things are running smoothly enough in Florence until Clara meets young Fabrizio (Tim Quartier) and is pretty much instantly smitten. She wants to hang out with him, visit his store and learn more about him, but overprotective Margaret tries to thwart all the efforts.

Margaret’s husband Roy (Chris Kayser) has stayed home and as they talk on the phone it’s clear that their relationship is missing something. He wants the courtship between Clara and Fabrizio to end immediately, but by this time Fabrizio’s family has taken to Clara, and Margaret too — especially Signor Naccarelli (Michael Strauss), the patriarch of the family. What Margaret has not told them all, however, is the secret about Clara.

The Light in the Piazza debuted on Broadway in 2005 and won six Tony Awards, including one for Best Actress in a Musical for Victoria Clark. The Broadway version also starred a luminous Kelli O’Hara as Clara. This production is directed by Richard Garner, former producing artistic director of Georgia Shakespeare Festival, and it’s a reminder of how skilled he is. This is all very convincing with set designer Kat Conley and projection designer Rob Dillard working in tandem to guide the audience through a museum, a church, a hotel rooms, the Naccarelli home, a scary late night rendezvous where Clara gets lost, and more, as well as back and forth from Florence to Rome. It’s all unrushed and staged effectively.

The story is simple enough, adapted from the Elizabeth Spencer novella and made into a 1962 Olivia de Havilland film. What makes this memorable is the score and the performances. With music and lyrics by Adam Guettel, the score is different than many standard musicals. It’s very operatic, and heavily orchestrated, and in lieu of show-stopping numbers, the score bridges the action and reveals character. It deservedly won a Tony Award. Of particular note here is Hales’ rendition of the titular number and Bagget’s bittersweet, ending “Fable.” And if Quartier’s version of “Il Mondo Era Vuoto” is supposed to endear himself to Margaret and Clara and the audience, it does so. Music director Alli Lingenfelter and a group of six musicians do justice to the score.

Garner’s ensemble, which also includes Joe Knezevich, Randi Garza and Steve Hudson, is immaculate. Like any tight ensemble, they come in and do their jobs but they don’t try to overshadow the leads. Of note in the supporting cast is the sublime Garza, who belts out a fiery “The Joy You Feel.”

The director draws beautiful work from his three leads. Baggett brings a jovial quality to the character of Margaret as well as a stubborn one. Her performance is funny and maternal as she tries to steer Clara clear of Fabrizio. The one quality she can’t quite nail is the heartbreak of the situation, seeing her daughter approach happiness and realizing her own marriage has anything but. Nonetheless, it’s a very effective combination of acting and singing.

Hales and Quartier may not be as familiar to Atlanta audiences, but both bring depth and compassion to their characters. Hales is believable as a young woman discovering herself and her needs and standing up to her mother. This is Quartier’s Atlanta debut and it’s a startling one. He is as charismatic as he is talented. He and Hales have terrific chemistry together. Both, too, are very much up to the challenge of the score.

The national tour of the show that came through in the Fox Theatre in 2006 lost almost all its charm in a too-large venue. The intimate setting of the Balzer Theater is a much happier home. This is one of the best musicals of the season — and Garner has given it emotions in spades. It really whets one’s appetite for the Theatrical Outfit/Aurora Theatre collaboration of In the Heights this September.