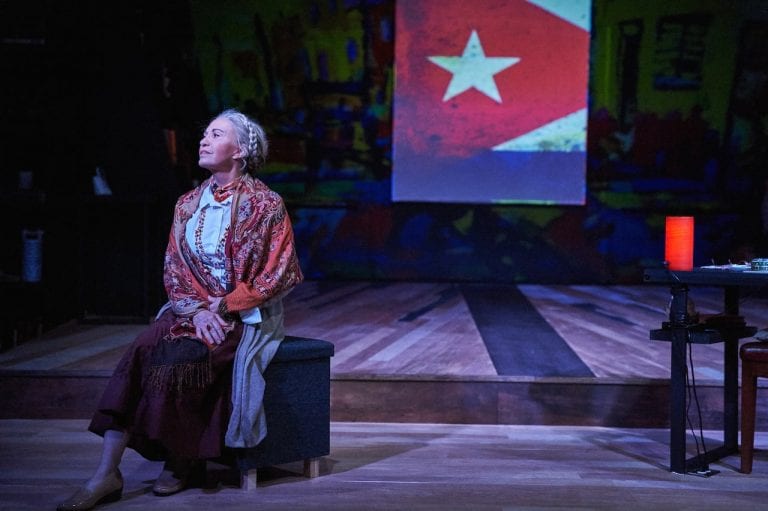 A sense of old-fashioned, if somewhat unusual, romance should beat at the heart of Pulitzer Prize-winning playwright Nilo Cruz’s 2014 play Sotto Voce, currently having its Atlanta premiere at the Aurora Theatre through May 8. Although the show has a decent script that brings attention to an underexamined historical subject, this particular production — directed by Justin Anderson — suffers from some poor casting choices; the heart never really gets pounding the way it should.

Actress Marianne Fraulo performs as the aged writer Bernadette, and even in gray wig and stage make-up, she looks far too youthful and robust to play the world-weary, frail, careworn, European writer in the autumn of life looking back through the years. Indeed, the character’s central action in the play is a wistful searching through lost time (the persistent attention of a curious student prompts the old writer to share and reflect on her experiences in pre-World War II Berlin).

There’s a sense of spiritual agedness and intellectual wisdom that should be there, but isn’t. I’ll venture to say categorically that a young woman pretending to be old shouldn’t perform this role. The miscasting is an especially odd one since even people who have never been to the theater before are likely familiar with the frequent complaint that “there aren’t any decent roles for older women.” The casting of a too-young woman in this role, in any role, is puzzling indeed.

Actress Denise Arribas could play a funny, young suburban mom in a different play, but she’s totally wrong for the role of Bernadette’s earthy and pragmatic Colombian maid Lucila. She doubles up parts, and she’s more believable in the role of Nina, the sister of Bernadette’s long-lost love whom we see in flashbacks. But that character appears only briefly and barely does much of anything, while Lucila becomes more and more central to the story, a story that recedes because the central characters are so hard to figure and place.

The script eventually gets to some interesting stuff about love and loss related to a real, tragic and underexamined historical event, the sailing of the MS. St Louis from Nazi Germany in 1939, but it takes us too long to get there.

The budding faux-romance is curious and unusual — it’s a romance that exists almost purely in the imaginations of the characters, a romance that sweetly weaves together past and present, presence and absence. But in the end, the romance becomes surprisingly conventional and predictable in its details; sweet talk and flowers, afternoon tea, walks in the park and so on. The production never gets off the ground, but even with a more suitable cast, I think the show is unlikely to make for a heart-stoppingly brilliant or revealing evening. The material is just — at best — pleasant, sentimental and interesting.