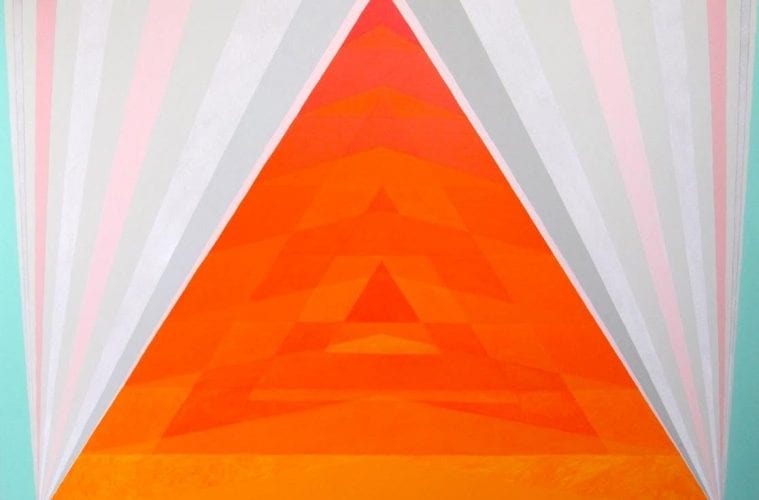 The glowing triangles of Don Cooper’s Fire Within, at Sandler Hudson Gallery through May 14, can be fitted prettily into a narrative of spiritually inclined modernist geometric abstraction. But squeezing them into the story of Cooper’s often-noted debt to Asian metaphysics and meditation would fail to do justice to a body of work that is one of Cooper’s most extraordinary to date.

Cooper states that the “inner fire” referenced in several of his titles is the fire of imaginative creation, not just the mystical fire within that comes from yogic concentration. This makes the paintings self-illustrative on several levels, for the choice of compositions of the arcane triangle within a circle is Cooper’s own, but the subtlety of shading and the sureness of rendering depend on a level of inner certitude that requires more inward stability than many artists can muster. Cooper practices what he preaches. The acrylic-on-canvas “Fire Within Smoke” is astonishing simply for the gradation from yellow into orange-red within the single triangle that dominates the composition. An unexpected gradual shift in palette within closely related colors is typical of many, perhaps most of these paintings and watercolors. Each one, however, uses the technique differently to create a dramatic effect.

“Inner Fire Altar” is the most complex example in the exhibition. Here, Cooper has situated a solidly red equilateral triangle at the center of a sequence of overlapping isosceles triangles. These transmute into pastel shades in the border, which surrounds  a set of equilateral triangles nested within the larger structure.

Other works incorporate concentric circles enclosing a central dot, Cooper’s homage to the Hindu “bindu,” an emblem of the universe’s originating force. This element constituted the whole of Cooper’s earlier series. Now, overlaid on a triangular base, it attains a new energy and complexity that is balanced but less unambiguously placid. In “Fire Symbol,” the circles almost absorb the underlying triangle; in other watercolors, they barely appear on the outer rim of the composition.

Such works as “Fire Within Lotus” overlay the geometry with traditional Asian designs that are neither circle nor triangle. They form a further reminder that Cooper is responding to the shape of a spiritual tradition as well as creating his own personal response to it. But it is the sheer variety of the personal response that makes this exhibition a uniquely powerful aesthetic experience.