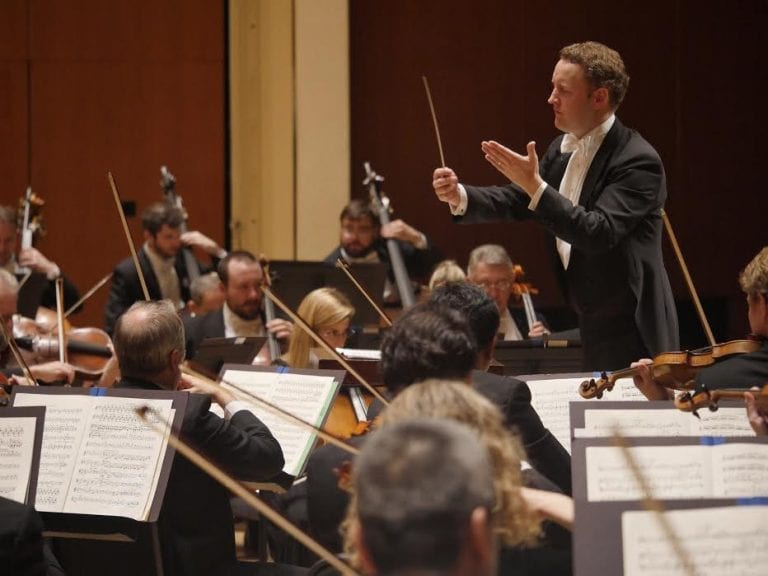 Conductor Michael Francis made his debut with the Atlanta Symphony Orchestra. (Photo by Greg Mooney)

Review: In their debuts with the ASO, Francis and Grosvenor provide a stirring night of music

On Thursday’s unseasonably balmy evening at Symphony Hall the Atlanta Symphony Orchestra performed a concert of music by Copland, Saint-Saëns and Vaughan Williams under the baton of guest conductor Michael Francis with pianist Benjamin Grosvenor as featured guest soloist. The concert will be repeated on Friday night at the intimate Falany Performing Arts Center at Reinhardt University in Waleska, then again Saturday night back on the ASO’s home turf at Symphony Hall. Francis and Grosvenor are both making their ASO subscription series debuts with these concerts.

Francis, the British-born conductor, opened the concert with a longtime favorite, the orchestral suite from Aaron Copland’s ballet Appalachian Spring, a piece most famous in popular culture for its adaptation of “Simple Gifts” — a Shaker dancing song written in 1848 by Joseph Brackett, often wrongly assumed to be an anonymous Shaker folk-hymn. Copland modified Brackett’s tune slightly, but its inclusion in his Appalachian Spring ballet and subsequent orchestral suite was what brought the tune to the attention of the American public beyond the bounds of the Shaker community. The tune itself has, in turn, contributed greatly to the popularity of Copland’s Appalachian Spring, which won the composer the Pulitzer Prize for music in 1945.

Francis, who is music director of The Florida Orchestra in St. Petersburg and the Mainly Mozart Festival in San Diego, drew a well-managed, splendidly evocative performance from the ASO musicians. The opening was like a quiet morning mountain twilight as light gathers and grows, the end like a peaceful, restful twilight at evening. In between, the music called forth the redolent Americana of the rural northern Appalachian ridges and farms of Pennsylvania. It also expressed the sentiments of exaltation and tenderness as a newlywed couple take their place among neighbors in the close-knit life and shared values of the community.

Grosvenor, the 24-year-old Essex-born English pianist, then joined Francis and the ASO as soloist for the brilliant Piano Concerto No. 2 of Camille Saint-Saëns. Grosvenor was last heard locally when he made his Atlanta recital debut at Spivey Hall in 2015. As he did in his Spivey recital, Grosvenor impressed at this ASO concert as a virtual heir to the great “old school” pianists, the kind you rarely hear anymore.

Possessing a formidable technique, Grosvenor plays deeply into the keys, boldly, but with a ringing, rounded weight to his tone in loud passages. In softer moments, he was not merely soft, but played with body, color and presence. On this occasion, with the passage of two years since his Spivey recital, he seems to accomplish all this with a greater economy of means, less unnecessary gestural bravura — his playing is at once passionate and at the same time remarkably straightforward and intelligent. One cannot help but look forward to his next appearance in Atlanta.

Grosvenor returned to the stage for an encore, Etude in A-flat major, number 11 of Quinze Études de Virtuosité, Op. 72 by Polish-Jewish composer Moritz Moszkowski, a piece frequently played by the legendary Vladimir Horowitz. Both a pianist and composer, Moszkowski was revered by the great pianists of yore as second only to Chopin in understanding how to write music for piano, but is not so frequently heard these days.

After intermission, the concert was rounded out with the Symphony No. 5 of Ralph Vaughan Williams. Although not so explicit, Vaughan Williams’ Fifth Symphony is as reminiscent of the rolling British countryside as Appalachian Spring is of rural Pennsylvania’s hills and farmland valleys. As such, they made for an interestingly compatible pair on either side of the robustly virtuosic Saint-Saëns concerto.

Unlike the stormy tautness of Vaughan Williams’ Symphony No. 4, which the ASO performed in 2014, his Fifth Symphony, even at its most boisterous or passionate, never becomes angry. Like Appalachian Spring, it concludes with some of the most serene, peaceful music in the orchestral repertoire.