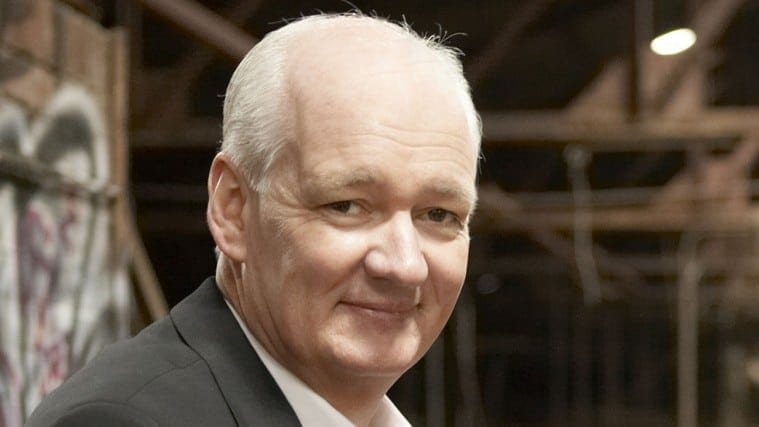 He never set out to be a comic, much less a household name, but Colin Mochrie has become one of the most recognizable funnymen around, known for his spontaneous moments of genius on the long-running TV show Whose Line Is It Anyway? Mochrie will perform at four improv shows with Dad’s Garage tonight and Saturday, returning to a theater he has appeared at numerous times in the past; he even guest starred in the company’s web series Hart of America.

Mochrie has become such an icon at Dad’s Garage that the company has the entertainer’s face painted on their lobby wall.

The collaboration began when Mochrie bumped into Kevin Gillese, Dad’s Garage’s artistic director, at an improv tournament in Vancouver in 2011. After introducing himself, Gillese invited him to perform. “I was nervous when I first approached him because — let’s be honest — he had no evidence that I was legit save for a few shared friends, but he trusted me and we set up his first dates in Atlanta,” Gillese recalls. The first gig was a success and has led to half a dozen more — and mutual respect between the two men. “He’s a nice Canadian boy,” says Mochrie of Gillese. “I checked him out, we set it up and I’ve been coming back ever since.”

Gillese notes the troupe always learns new tricks from the veteran. “It’s not so much a matter of him fitting in with our style or anything like that — he obviously does quite well — but more about us recognizing that he is the best there is and if we can touch the magic even for a moment, then we’re living the dream,” says Gillese.

Born in Scotland, Mochrie moved with his family to Canada, first near Montreal and then to Vancouver. A small role in a play during secondary school led to a desire to be an entertainer. During his time at Studio 58 theatre school, he realized he was keen on improv.

Entering the field changed his life. “I was a quiet kid, very shy,” he says. “Within my group, though, I was the funny one. When I saw improv it seemed like fun. It became a turning point in my life. It helped me professionally and personally, and it made me more outgoing. I am thankful that someone came up with it.”

He was drawn in by the rush of creating something new every night, and the journey that each night took. “I think it’s the excitement, going out in front of an audience with absolutely nothing and — somehow, by the end of the evening — having given them a show, working with their suggestions,” he says.

Yet he never thought improv would be a career. It was something he enjoyed and felt comfortable doing — on weekends. “This was a long time before Whose Line Is It Anyway? There was no thing as a working improviser. I feel lucky that I had a chance at this career.”

After some time with Vancouver TheatreSports League, he moved again — to Toronto – and became part of The Second City comedy troupe. Shortly after, in 1989, he auditioned for the British version of Whose Line Is It Anyway? but didn’t get it. He did make it in the next time he tried, but was cut after one episode. It was only after a third audition that he became a regular, appearing on the show until it ended in 1998. When the American reboot hosted by Drew Carey came up, he appeared on every episode from 1998 to 2006.

The show made improv a household word. “There had been no improv show before that,” Mochrie says. “People did not know what improv was and the show gave people a reference point. I always say the show was not the be-all and end-all of improv, but it was a dipping your toe into it. A lot of improv fans weren’t fans of it because they thought it was too jokey or shticky. I understand that. We were there to make a TV show. It had to be fast. We did not have time to build a character or situation and explore it fully. But I always hoped it would be a stepping stone to other forms of improv, all the things that Dad’s Garage and companies around the world are doing.”

Doing improv with a longtime colleague such as Ryan Stiles is certainly different than with a virtual stranger. It comes down to a matter of trust, something he has honed over the years. “When I am improvising with people I know well, I trust that even if I don’t know where it is going in a particular scene, I trust I will follow them and see what happens,” he says. “With people you have not worked with before, you have to have a blind trust that they are improvisers and they know what the rules are. I concentrate on listening more so I don’t miss anything they’re offering.” Mochrie became known for his work on Who’s Line Is It Anyway? (Courtesy of CWSeed)

Unlike improv, the world of stand-up comedy is a field he readily admits he never could have entered. He much prefers improv’s ensemble feel. “I love watching stand-up, but I don’t know how they do it,” he says. “It’s the scariest art form in the world to me. With improv, the audience is such a huge part of the show. We rarely get heckled — the audience is on our side. When you are doing stand-up, the audience is watching and waiting to be wowed. They know we have written all this stuff, but it’s up to them to judge. With improv, they know that all they have are the suggestions. They are a little more invested in the process. They like to see us in trouble but want to see us get out of it. We have more leeway.”

He certainly acknowledges that it’s easier to get noticed these days, especially compared to his early years, but it’s still a profession that needs constant work — and dedication. “I don’t want to sound like the old guy saying, ‘In my day . . . ,’ but I think there are advantages these days,” Mochrie says. “It’s still a hard business to get into. With the internet, you can put your own stuff out there. It was a harder process for me, especially being in Canada. There wasn’t as much TV or as many channels.”

Mochrie believes longevity is the challenge for improv performers who do break in. “My career is based on stamina,” he says. “I hung in there until everyone else quit. The way to go is to not get too comfortable, to keep learning and push yourselves. The more you do it, the better you get. Find places to get out there and show your stuff.”

Mochrie has found the Dad’s Garage gang a pleasure to work with. Not only is the Southern hospitality a welcome relief, but the gig also returns him to his roots. “They are sweet and lovely to hang out with, and they are great improvisers,” he says. “I don’t know them well as improvisers so I don’t know what to expect. I kind of have to go back to basics and be on my toes. It’s almost a refresher course in improv.”

Despite frequent visits, Mochrie wants to try something new this go-around. “One of the improvisers, Matt Horgan, is a barbecue buff,” Mochrie says. “He takes me anywhere there is meat. I need to see more of the city than meat-based places. Maybe the Georgia Aquarium this time.”