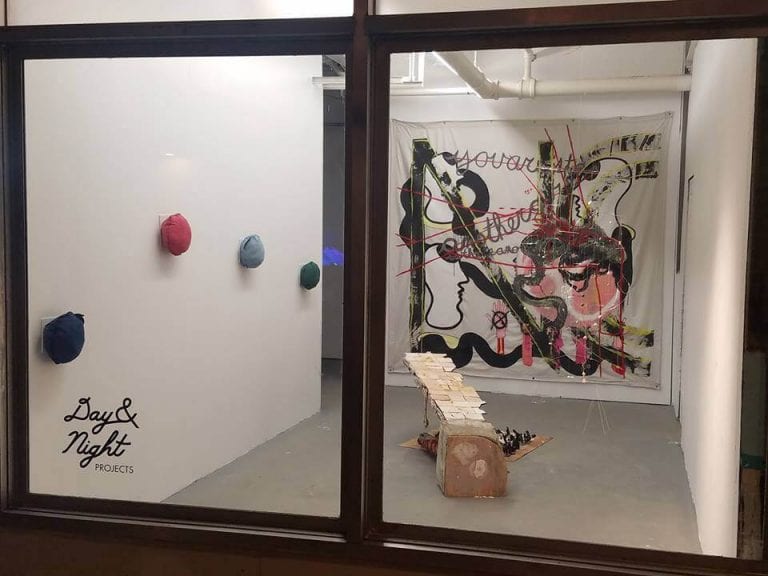 Fantasy is the exercise of imagination, to make visible a vision separate from reality and free from limitation. These fanciful mental images entertain children and adults alike with magical thinking. Secret personal dreams is a place where sovereign control can create fulfillment of needs and wishes. They can also manifest as a stress-induced retreat from reality, divorced from the standing realities of the world that results in never truly living in the moment. From innocent make-believe to morbid desires, fantasy encompasses it all.

In Atlanta’s most recent manifestation of the word, Fantasy is both the subject of a multimedia exhibition by five artists and the name of their loose collective. The group was born out of SOUP Experimental, which bills itself as “Tallahassee’s premier outlet for emerging artist and experimental art,” and is showing at the relatively new artist-run space Day & Night Projects. The collaboration between the two collectives will be mutually beneficial, as SOUP will be hosting Day & Night Projects in their gallery in December.

Matthew Lawrence takes fantasy down the dark and twisted road in his work All New Tuesday Night. The large banner takes on, according to the statement, “representations of abstracted celebrity archetypes as well as reveal what might be choreographed moments in domestic spaces.” Besides the title, obvious references to television or celebrity are not readily identifiable. There are three silhouettes, and out of their forehead words flow from one to another at a 45-degree angle that is demarcated in red. The words over top the red are rendered in a loose script with just enough information missing that you can’t see or really make out what it says. Like bad thoughts made visual, the cartoonish severed hands and dark intestinal squiggles give the painting an edge of vaguely murderous intent.

The worn domesticity of Home, Sweet Home speaks to the fragility of our habitats and homes not being made to last. Ashton Bird’s sculpture is a mishmash of weathered building material as if thrown away demolition debris fused in a dumpster. The work consists of a knocked over column, topped cracked Pale tile, the side revealing a sticky mesh under layer that transitions to a weather wood siding over top and mostly supported by concrete parking bollard, the gesture connected with a shredded Persian carpet. This column lays over a panel with tufts of black tar paper, plaster and concrete. Home, Sweet Home has a mortal, decaying quality from being left outside for some time, which left it with bugs stuck to the mesh along its side. The work reminds me of the variance between the way my childhood home looked like in mind versus the experience of it 20 years later.

Filling the gallery with the sound is the work Did you see them? Did you hear them? by Sierra Kramer.  The whimsical work consists of four cloud-shaped puffs of pillows that beckon the viewer to lie against the wall and listen. A soothing, feminine voice tells vivid and nostalgic childhood stories with Mama Jean. Mama Jean’s way of interpreting reality infuses mundane with fantasy; moments of rain turn lizards into party animal, light spots into fairies that dance around the room and African violets that love music. One pillow’s sound is just that of ambient noise and the occasional twinkle of wind chimes and plays right into Chelsea Raflo’s work.

The Atlanta-born Raflo, who has exhibited in numerous venues across the city and southeast is working toward an M.F.A. at Florida State University. Like Kramer, Raflo’s approach to fantasy is playful, lively and childlike, presented by a series of mobile sculptures. Negotiation in Space stands out as my favorite piece in the exhibition and has the precise feel of an architectural drawing. Delicate enough to spin with the force of your breath, the mobiles are nested together to form a chandelier-like installation. Through spare geometric forms like lines, cubes and spheres, Raflo explores “the kinetic energy of suspended objects and the negotiations of balance that results in simple, elegant arrangements.” The piece is a contradictory mix of complex and airy with an effortless attention to detail.

Lucia Riffel delves into questions of, “Where does the internet go when we aren’t looking?” and the intersection of digital, physical and psychological spaces. Cloud, a term used as a metaphor for the internet, is a video of a digitally rendered room from two angles reminiscent of early 3D video games. The reflections of the mirrored walls of the room extend the ambiguous polygonal landscape, making it look bigger than it is. The words “Is this Forever?” float in front of and then pass through a round portal. This wrestles with the idiosyncrasies of a system with a permanent-seeming way of capturing ephemeral moments. It brings to mind the self-censorship that can accompany the desire to share over the internet.

Fantasy is an approach, an interpretation taken in very personal directions at Day & Night Projects. In this exhibition it becomes the lens through which the subject is manipulated into work that looks very different from its neighbor, where things like celebrity, domesticity and the internet mingle apart from reality. SOUP Experimental is only a year-and-a-half old, but the DIY Tallahassee outlet has already proven itself ambitious with a prolific exhibition schedule and collaborative ventures with spaces like Day & Night projects. This intriguing Atlanta debut by the collective Fantasy is sure not to be the last we see of them.