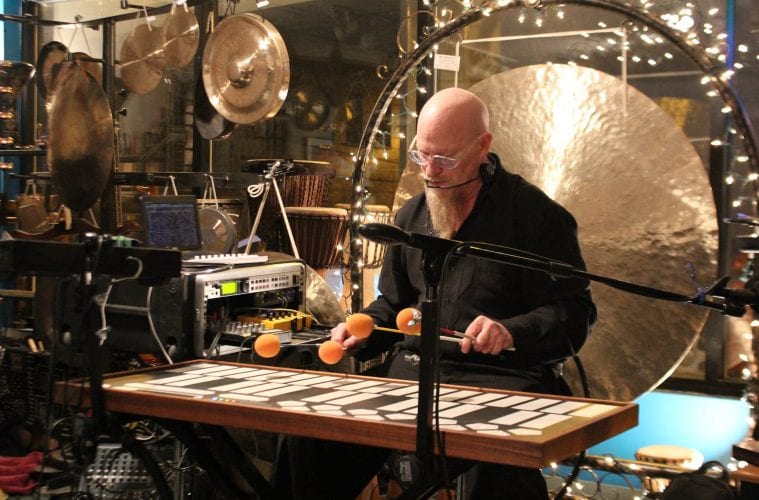 Eyedrum Art and Music Gallery presented “Drums and Electricity” Saturday night — a concert that featured three percussionists who are deeply involved with merging their live percussive art with interactive electronics: Klimchak, Sean Hamilton and Victor Pons. Scheduled for 9 p.m., the show ultimately had a good turnout for the small performance space. But it began a half hour late, at least in part due to intense traffic issues thanks to multiple big Labor Day Weekend events in downtown Atlanta.

The inimitable Klimchak opened the program with “SloGo” suite — a piece he previously performed at Eyedrum back in May in a farewell concert for fellow percussionist-composer Olivia Kieffer, who had curated Eyedrum’s Composers Series concerts over the past year but left Atlanta for her home state to pursue graduate studies in composition at University of Wisconsin.

The “SloGo” suite involves a very compact rig of percussion and electronics, making it extremely practical for touring and performing in small spaces. It has three parts: “Sticks and Tones,” “Finger Against the Flood” and “Rated PG for Repetition.” Although he considered them completed works at the May performance, Klimchak says each has evolved since then. As Klimchak had noted previously about his own compositions, “No work is really set in stone and will change a bit based on my mood and that of the audience.” That attitude keeps his performances alive and fresh, as evidenced by Saturday’s rendering.

Tampa-based percussionist Sean Hamilton was up next with his much-toured, set-long solo improvisation for drum-set and interactive electronics. Hamilton effectively showed what kind of range of dynamics and color can be had from a fairly standard trap set, using regular drumsticks, felt-covered mallets, brushes, hands and other objects with which to strike or stroke the instruments.

His body movement during a performance resembles a seated dance in tactile relationship with the array of drums and cymbals that surround him, and in the process the listener is impelled to become acutely aware of physical movement and space involved as much as the resulting sounds. The interactive electronics are an interesting enhancement, but the acoustic element of Hamilton’s performance was convincing enough to stand on its own.

The final set of the night was performed by Victor Pons, whom ArtsATL celebrated in 2013 as one of its “30 under 30” young artists to watch based on his work with percussion and electronics — digitally enhanced vibraphone in particular. Pons left Atlanta the following year to begin doctoral studies in music at the University of Illinois at Urbana-Champaign. This summer, he returned to teach percussion and computer applications in music at Georgia State University and has quickly returned to the front edge of the city’s new music scene.

His first work up was a reprise for Pons: “Praeludium,” for snare drum and electronics, from “Sonate en triOhm” (2011) by Laurent Durupt. Pons had given the piece its western hemisphere premiere in 2014 at The Goat Farm as part of his “Ampere 2.0” concert with France-based Links Duo.

Another work for solo vibraphone came next, “New Years Day 2” (2016) by composer, programmer and singer Elliot Cole. Pons then picked up a small frame drum to perform “Three Oddest Words” by Eduardo Campos, but ran into a technical snafu with the software involved so turned back to the vibraphone to perform the world premiere of a new work by Adam Scott Neal, “Terminal Moraine.”

The penultimate work was “Sferics” by Tom Beverly, an audio field recordist and multimedia composer with a mission of preserving habitats and species. “Sferics” utilized time-lapse video of clouds and rain with related normal-time audio to complement Pons’ vibraphone part.

The concert concluded with “The Pillar II” by John Nichols III. It incorporated text from Vladimir Solovyov’s The Spiritual Foundations of Life (1885) and was inspired by parallels between Solovyov’s concepts of “all-unity” and “wholeness” and those of esoteric composer Alexander Scriabin.

The concert started late, and also ran long — ending near midnight — because of the technical snafu with Campos and because Pons’ set proved significantly longer than those of his colleagues. He could have easily done well with, say, only five instead of an ambitious seven works, and produced the same keen level of musical impact with a tighter, more compact set list. His ambition, however, is admirable, and we can look forward to what Pons brings to the fore in his next performance.