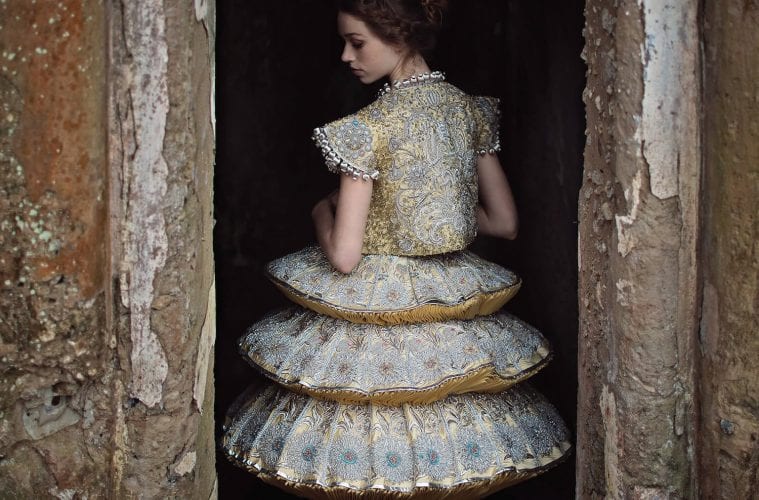 The imperial yellow, fur-lined cape Rihanna wore to the Metropolitan Museum of Art’s Costume Institute Gala in 2015 was an instant icon that turned heads, cemented the singer’s status as a sartorial risk-taker and established Guo Pei’s genius for over-the-top red carpet design. The 55-pound dress also launched a thousand memes on social media — with detractors comparing the piece to everything from an omelet to Big Bird’s bright yellow plume.

But when Guo Pei: Couture Beyond opens at SCAD Fash Museum of Fashion + Film on September 7 — the designer’s debut exhibit in the U.S. — visitors will have a chance to see her work up close and judge for themselves. Over 30 of Pei’s flights of fancy from the past decade, including the now-infamous cape, as well as pieces from her prêt-à-porter collection will be featured in the inaugural U.S. solo museum exhibition.

A darling of Vogue magazine and named one of Time magazine’s “100 Most Influential People” last year, Pei was dressing royalty, members of the political elite and celebrities in China 20 years before making a splash Stateside. She is the first Chinese national designer invited to join France’s Fédération de la Haute Couture et de la Mode, and made her Paris Fashion Week debut in January of 2016. She is also revisiting a tradition that has permeated fashion since the 16th century when the Westernization of Chinese motifs and iconography first inspired double takes outside of Asia.

Pei’s work showcases opulent embroidery and sumptuous detail. She has reclaimed and reinvigorated culturally specific elements by incorporating fans, origami, dragons, porcelain and geometric graphics in her design vocabulary. She has even reimagined the cheongsam, or qipao, a body-hugging, one-piece dress made famous by socialites in Shanghai during the 1920s for 21st-century clients. Her Spring/Summer 2017 collection, titled Legend, was inspired by the murals of the Saint Gallen Cathedral in Switzerland. And she does not shy away from color.

“These garments are breathtaking!” says SCAD fashion historian Carmela Spinelli. “The palettes remind me of a comment attributed to Louis Comfort Tiffany following his travels throughout the Near East. Upon returning to New York [where the all-black dress code triggered a visual culture shock in contrast to the bold, vivid colors people favored in other parts of the world], Tiffany is said to have asked, ‘I wonder why people make so little use of their eyes?’ We need our students to use their eyes. We need the world to continue to use their eyes.”

In scale, use of luxury materials and manpower hours, Guo Pei’s technique reflects her training as a couturier in Beijing and Paris. It is virtually impossible to understand the depth, detail and magnitude of her work by seeing it in two dimensions. But seeing the works in 3D will help museumgoers understand how a dress might take tens of thousands of hours to construct. For scholars like Spinelli, the value of granting design students proximity to such wearable works of art is priceless.

“Educators need to get their students out of the classroom, away from their computers and cell devices, get on a bus and see this exhibition,” says Spinelli. “It’s more than a fashion exhibition. The lessons gleaned from this show provide context into cultural and social exchange and history, economic and political history and Imperial Chinese history. It can help students understand the cultural exchanges between the East and the West in a most visually compelling format. Of course, the virtuosity of technique, opulent materials and lavish design offers students a first-hand glimpse at authentic couture where seamstresses have spent from 20,000 to 50,000 hours on a garment.”

SCAD FASH will produce a monograph, to be published with Skira Rizzoli, to commemorate the exhibition, and a film commissioned by the school will debut in the museum’s Film Salon. SCAD FASH will also offer educators and their students an exhibition curriculum guide developed to provide additional insight and historical context about Guo Pei and her designs.

A concise, complementary exhibition of Guo Pei’s designs will be on view October 27, 2017, through March 4, 2018, at SCAD’s Pei Ling Chan Gallery, Savannah, Georgia. Admission is free to all museum members, as well as SCAD students, faculty and staff with a valid SCAD Card. Open to the public with the cost of museum admission.