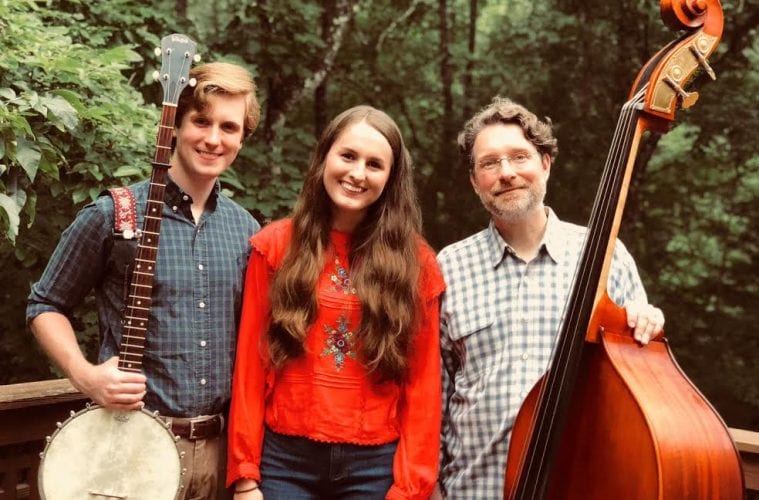 This past Saturday evening, the Atlanta Area Friends of Folk Music presented another installment of its monthly Fiddler’s Green concerts at the First Existentialist Congregation in Candler Park. The concert featured a pair of contrasting local musical acts each making their Fiddler’s Green debut: CJ Jones and The Spirit Bones and The January Duo.

The Atlanta Area Friends of Folk Music formed in 1981 to support the cause of the folk music genre and has been in continuous operation ever since. Its Fiddler’s Green series began just five years later.

CJ Jones and the Spirit Bones plays original songs by band founder/leader, guitarist and Emory University biological researcher Edward “Ted” Pettus. He describes the band as sounding “like Commander Cody, Mojo Nixon and Hunter S. Thompson had a three-way mutant love child with an intellectual edge.” You could also call it raw-skinned country-rock and roots that’s overdosed on Saul Alinsky’s Rule No. 5: ridicule is man’s most important weapon. If you’re not stoked by the band’s cultural sarcasm, the music may not be enough to hook you by itself, as it is highly dependent on the former. Much of the gathered audience seemed to be. To that extent, it’s comedic, funky Americana brand of entertainment.

You could likewise call CJ Jones and the Spirit Bones a concept band, based upon a concept album, The Odyssey of Cledus Jeremiah Jones, that is itself based on Pettus’s satirical mythology of an Appalachian prophet named Cledus Jeremiah Jones, CJ Jones for short. The pronouncement on spirituality, “It ain’t religion if it ain’t got snakes,” is enough by itself to sum up the act’s attitude: basically, making fun of a segment of rural Americans deemed “cultural yahoos” by urban intelligentsia. It’s the kind of thing that draws an eclectic cult following that’s similarly inclined but not necessarily appealing to those with different comedic tastes.

In contrast, the January Duo, which kicked off Saturday’s show, draws its repertoire from traditional roots sources — folk to bluegrass to old-time to gospel and blues. The group was formed in January 2015 when young guitarist and banjo player Payton Scott and classically trained vocalist Sara Grace Carmical met in high school. Shortly after, Payton’s father — acoustic bassist and Atlanta Symphony Chorus alumnus Chris Scott — joined up with them. Despite appearing as a trio, they kept the name January Duo. Carmical is currently a sophomore voice and biology major at Emory University. Payton Scott honed his craft under the tutelage of folk legend Frank Hamilton and Jens Krüger and is currently an instructor at the Frank Hamilton School.

They opened with an iconic song of the contemporary folk-music revival, “If I Had A Hammer,” written in 1949 by Pete Seeger and Lee Hayes in support of the progressive social change movement and first recorded by their band, The Weavers. Other highlights of their set included another Pete Seeger song, “The People Are Scratching,” the 1972 Country Gentlemen bluegrass song, “Fox on the Run,” and “I’ll Fly Away,” the famous 1929 hymn by influential southern gospel composer Albert E. Brumley — likely the most recorded gospel song ever, frequently heard in bluegrass jam sessions.

The January Duo closed their baker’s dozen set on a high note with “Power and the Glory,” an American patriotic song by 1960s protest singer Phil Ochs that is redolent of the songwriting of Woody Guthrie.