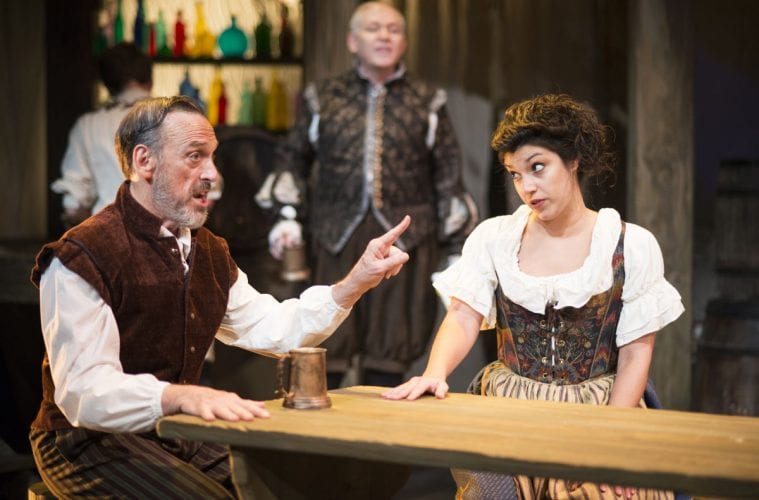 Review: Gunderson’s “The Book of Will” a funny and vivid ode to Shakespeare’s legacy

The existence of Shakespeare’s plays in print seems like such an established fact of life that it’s strange to think there was a time when the future of his work was entirely uncertain. As Decatur-native playwright Lauren Gunderson imagines it, that precarious historical moment was an especially fascinating, contentious, funny and compelling one.

Gunderson’s appealing new play The Book of Will focuses on the circle of actors, friends and publishers who put together the First Folio after Shakespeare’s death, and it’s currently getting a fantastic production at Atlanta’s Theatrical Outfit, running through September 9.

When the play opens, it’s been three years since the death of the Immortal Bard, and though his plays are still remembered fondly and produced on stages across London, inaccurate knock-offs are appearing both on the boards and in print. An encounter at a tavern near the Globe Theatre between the loyal, aging actors of Shakespeare’s company the King’s Men and a showy young upstart playing a specious Hamlet nearly results in fisticuffs. The subsequent death of actor Richard Burbage (Jeff McKerley, substituting for an injured George Contini), the living repository for many of Shakespeare’s greatest roles, ultimately underscores the urgency of writing down the true versions of his great works.

The play zeroes in on the lives of two surviving actors of the King’s Men, John Heminges (Theatrical Outfit artistic director Tom Key) and Henry Condell (Doyle Reynolds), both splendid in their roles. Gunderson’s play is as much about life in the theater as it is about Shakespeare: the vicissitudes of the actors’ lives and the challenges of their chosen task force them to do some serious reflection about both the futility and significance of theater as an art form.

In the end, however, the play is also an ensemble piece, and director David Crowe is especially adept at keeping the wit and energy flowing throughout with a great 10-member cast (but I have to point out I’m growing more and more annoyed with Atlanta directors and theaters who proffer swishy minor male characters for easy laughs in this political and cultural environment). Still, overall, the humor is better than that, and action feels wonderfully fast-paced and multifaceted but never rambling or hard to follow.

A narrowly averted problem with the plot is that, although there are obstacles, arguments and doubts along the way, true conflict seldom rears its head. Gunderson’s tale is at heart a sweet one about friendship and art, which is interesting stuff, though not inherently dramatic. The play (successfully, thank god) must often get by on charm.

Gunderson’s writing in its energetic wit, its imaginative take on a significant historical moment and its fascination with the advancement of human thought brings to mind the work of the great British playwright Tom Stoppard, though it’s worth noting that The Book of Will is vastly superior to Stoppard’s romp through similar territory in Shakespeare in Love, which I found cloyingly facetious. Gunderson far more capably and joyously navigates the lines between known fact and imagined fiction, between momentous subjects and a light touch. In her hands, a piece of history that may initially seem somewhat murky and leaden becomes lively, personal, vivid. The Book of Will makes for a great start to Theatrical Outfit’s new season. This is a production to savor.