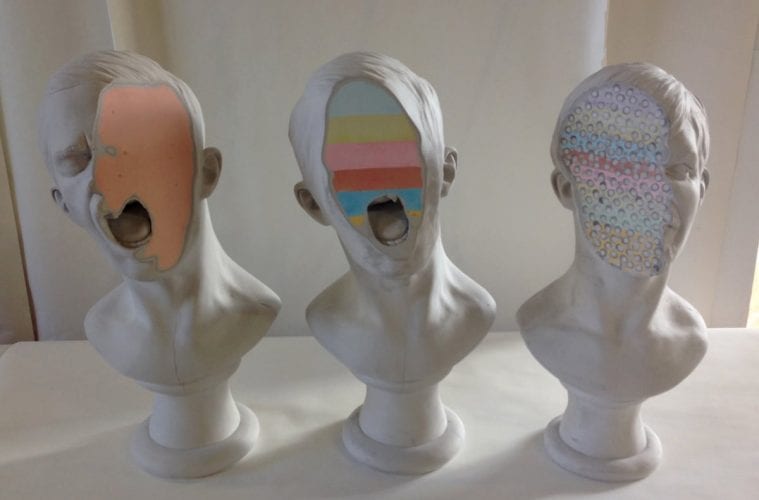 Since its March 2015 installation in Concourse E of Atlanta Hartsfield-Jackson International Airport, Ceramix: Georgia’s Creative Claymakers has almost certainly been seen by tens of thousands of transient passengers. Or, more accurately, Hope Cohn’s sprawling exhibition has been glimpsed by tens of thousands of hurried travelers, since it requires time and commitment to travel to every wing of the concourse.

Viewers who think of Georgia ceramics regarding folk pottery or functional ware will find this exhibition not just enlightening but astonishing. It is thus important to note immediately that would-be viewers will have a chance on May 11 to tour the show without having to buy an airline ticket. (Details below.) 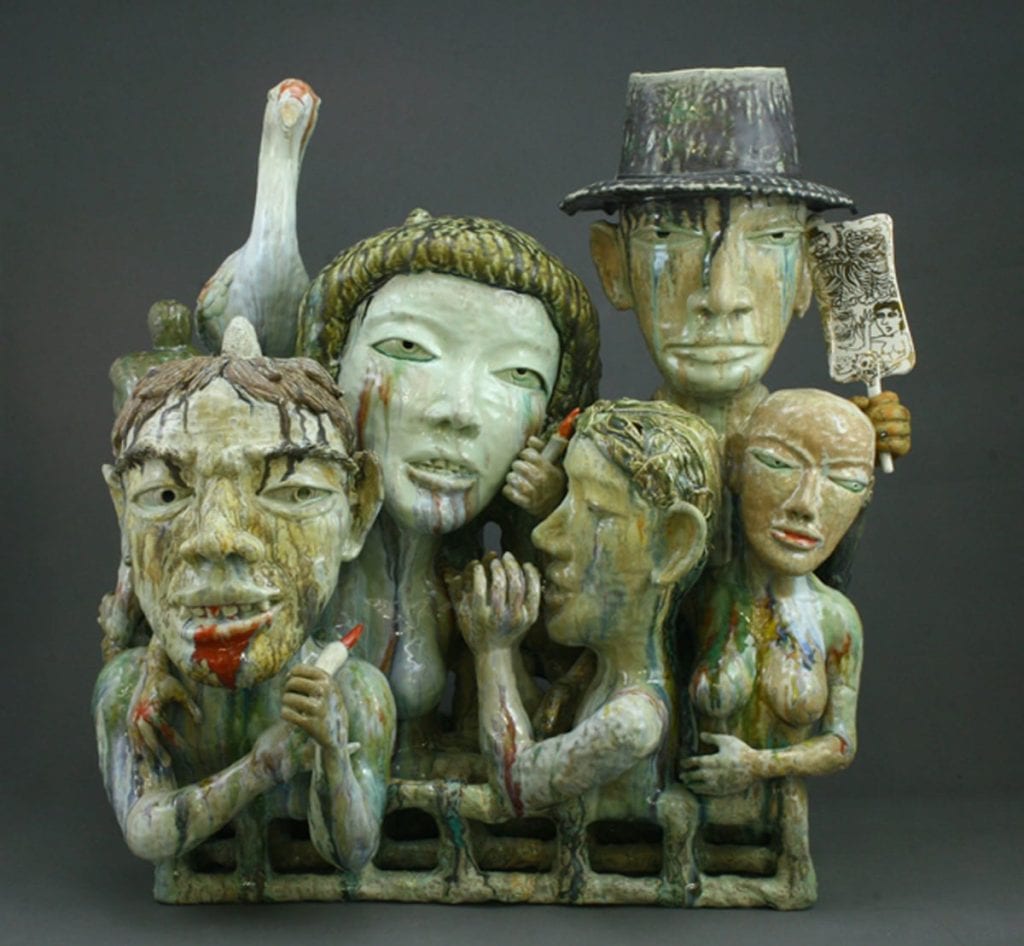 Dramatic, often witty figures by Sunkoo Yuh, Kirsten Stingle, Michael Klapthor, Kyungmin Park and Christina West demonstrate from the concourse atrium onwards that sculptural work is a cardinal component of ceramics in Georgia. They also illustrate why this exhibition is worthy of a book-length catalogue; it’s impossible in review format to describe the variety of figuration here, much less the diametrically different concepts and impulses behind its making.

Cohn’s concise curatorial essays in the several exhibition cases deserve this kind of catalogue. Taken as a whole the essays serve as an effectual survey of the range of contemporary clay in Georgia (plus at least one ex-Georgia ceramist, Karen Rich Beall), alongside excellently selected examples of each of the 40 or so ceramists represented. 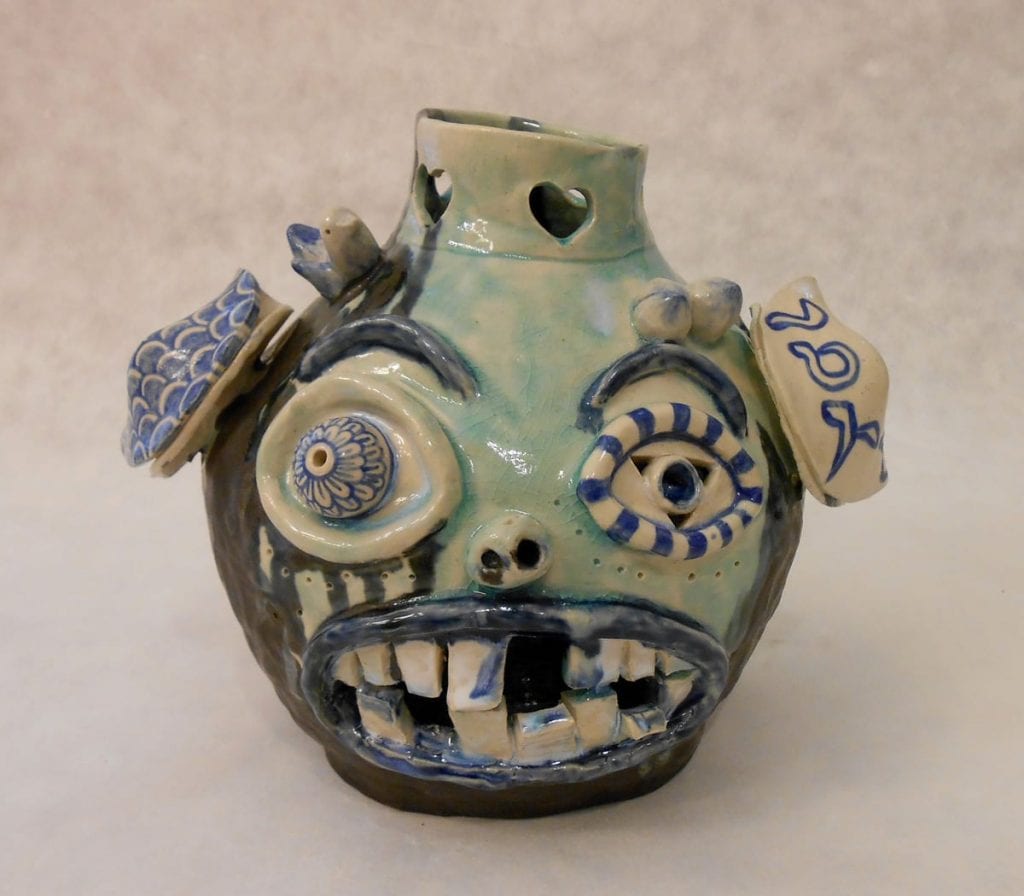 The complimentary brochure available on the site gives piquant photographs that hint at the astounding encounters between old and new that Ceramix presents—a whimsical face jug by folk potter Lanier Meaders juxtaposed with a face jug by contemporary artist Jiha Moon makes its point without resorting to art historical commentary. But the exhibition addresses far more, and it deserves permanent documentation.

An exhibition case devoted entirely to teapots is meant to entice passersby as well as demonstrate that functional form need not be traditional— a wider spectrum of vehicles for dispensing the beverage is unimaginable. Some of the teapots are by artists whose work also appears in exhibition cases devoted to them alone—to take only one example from among these latter; it’s easy to see why Eileen Braun’s off-kilter interpretations of Wedgwood deserve a display of their own. In a consistent style executed in a number of traditional vessel forms, they turn the restrained English designs of Wedgwood’s Jasperware into excesses of foliage taken from the leaves outside her window.

Most if not all of the Georgia ceramists who have become legendary for a diverse array of reasons receive proper attention here. We would expect to see sections devoted to Ron Meyers, Rick Berman, Mary Engel, Ted Saupe, Diane Kempler, Mario Petrirena, not to mention the various members of the Meaders family, and we find them. We also find such newly emerged ceramists as Carolyn Carr, previously known primarily as a distinguished painter. There are likely surprises here for all but the most determinedly comprehensive of Atlanta art viewers—I had previously been unaware of the map vessels of Mallory Rose or the edgily amusing imagery of John Roberts, for example, and am embarrassed to have forgotten the chimeric figures of Caroline Smith.  I’m sure there are omissions, but Cohn has gone to great lengths to be inclusive.

By now it should be evident that the guided tour on May 11, starting at 11 a.m., is almost a necessity, even if you are planning a flight out of Hartsfield-Jackson before the exhibition closes in June. Contact Katherine.Dirga@atlanta-airport.com before May 9 to reserve a space.