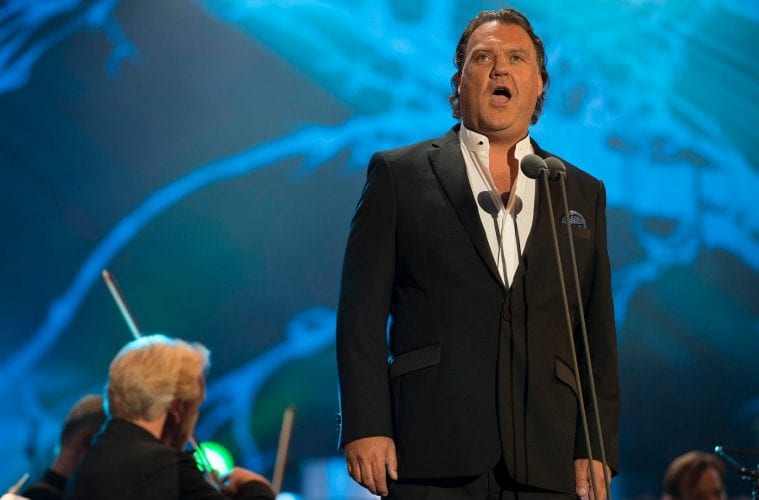 This post was brought to you in partnership with artcloud. Artcloud is a personalized tool for curating an art collection – whether you are an artist, gallery, or collector. With this social network and built-in marketplace, you can browse thousands of artworks by price, keywords, color, and more through the artcloud app.

Just a few months after the trustees of Spivey Hall broke ground south of Atlanta, bass-baritone Bryn Terfel made groundbreaking news as the recipient of the Lieder Prize at the BBC Singer of the World competition in Cardiff, Wales. It was a big story back then as Welshman Terfel and Russian Dmitri Hvorostovsky battled for the top prize.

With hulking stature and booming narration, Terfel laced the recital with tales of his early days at London’s Guildhall School of Music and Drama. There, he apparently studied nothing but art song for three years with his teacher Arthur Reckless (a.k.a. A. Reckless, baritone).

Terfel’s storytelling included an education of the trials and tribulations of other renowned baritones too, such as Feodor Chaliapin, the man who couldn’t master Ravel’s “Don Quichotte Songs” and instead asked Jacques Ibert to compose something a bit more accessible. Terfel sang the Ibert songs displaying a wall of sound, overwhelming at times within such an intimate space.

John Charles Thomas — an American baritone from days of old and a rival of the aforementioned Chaliapin — inspired Terfel’s repertoire choices as well, which included Albert Hay Malotte’s version of “The Lord’s Prayer,” a lovely arrangement of “Home on the Range” and Wolsely Charles’ “The Green Eyed Dragon.” (The latter Thomas sang on the Westinghouse Radio Show in 1943.)

In one of the most eclectic voice recitals ever performed at Spivey Hall, Terfel sang for more than two hours, barely taking a moment off stage between sets. We heard an abundance of Welsh songs, including the tragic “Sul y blodau” by Owen Williams, a strophic song that tells of a mother’s regret at the grave of her son. Within the final stanzas, Terfel sang the last mournful words without accompaniment then launched into Frederick Keel’s “Three Salt-Water Ballads” with unfaltering diction and boisterous energy.

Terfel’s voice has no doubt evolved since his triumph in Cardiff singing Schumann’s “Schöne Fremde.” Despite the mileage of a high-caliber career, he can impressively harness a sizeable voice and employs voce finta at will. He sings a silly song with the same integrity as Schubert lieder.

No doubt the Spivey Hall audience will recall his Atlanta recital for countless reasons, but paramount among them his final encore, Tevye’s great song from Fiddler on the Roof, “If I Were A Rich Man.” After all, one will never hear another Tevye with vocal powers the likes of Bryn Terfel. That is certain.