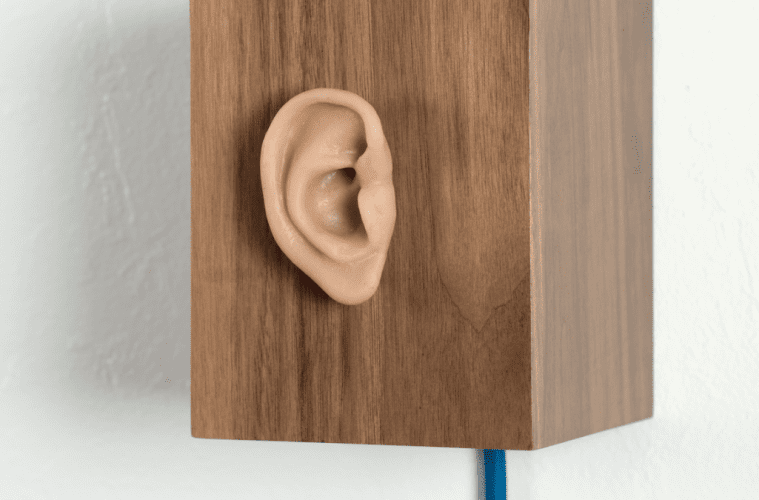 Imagine you’re a detective. You must work backward from clues to create a story that will solve a crime. Curator Victoria Camblin’s Clues & Scientific Method, on view at Marcia Wood Gallery from February 21–25, operated under a similar premise, inspired by an academic article from 1980 that connects a detective’s investigation and medical and psychoanalytic analysis to the act looking at art. (The show is an annual exhibition of works by MFA students from the University of Georgia’s Lamar Dodd School of Art. Camblin was invited this year to guest curate.)

Camblin organized Clues & Scientific Method to open with domestic work and then transition into more “scientific” work, explained Wood during my visit to see the short-lived exhibition at her Castleberry location. Hanging in the foyer was a sugar-dusted paper wreath titled Schamaltz by Kaleena Stasiak. Inside, Stasiak’s Early American has a similar, radial form. Made of various table legs in the vernacular of household furniture, its asterisk shape made it a sculptural, not functional, object — as if to draw attention to decorative, easily overlooked details. Such minutia is the crux of the work by the annual showcasing of works by nine University of Georgia graduate students showcased in the exhibition.

The title was inspired by an essay by Carlo Ginzberg which contains theories of knowledge that, according to Camblin’s brief statement, have “strong applications in today’s so-called post-truth world.” Linking the disparate practices of these emerging artists to Ginzberg’s “Morelli, Freud and Sherlock Holmes: Clues and Scientific Method” requires (appropriately) a bit of inquiry and a lot of homework. Ginzberg speculates that Neolithic hunters anticipated later forms of narrative by piecing together remnants of information such as a prey’s footprint or markings. Acquiring information in this manner marks the beginning of the “conjectural” method of knowledge. Diviners also belong to this category as they read things like tea leaves and bones to foretell the future. Both glean information from fragmentary signs that fail to usefully translate to a big-picture understanding of the world: the tracks of one animal, the dregs of one person’s tea only allude to a singular circumstance or an individual animal’s trajectory. Eventually, Ginzberg explains, as women and lower social classes become associated with “conjectural” knowing, it becomes understood as a lower form of knowledge.

Enter Galileo and the scientific method in the early modern era. Observation of natural phenomena provided a more comprehensive way of knowing that lends itself to abstraction and a general understanding of the world. It is associated with power, masculinity and authority. The relationship between conjectural and scientific knowledge occupies much of Ginzberg’s discourse.

The three figures named in the article’s title — Morelli, Freud and Doyle — shared a history of medical training. Morelli, writing under a Russian pseudonym, published an article in which he argues that the small details of paintings such as ears, hands or fingernails are seemingly minor characteristics that enable better attribution of a particular artist’s style. Ginzberg makes a compelling case for Morelli’s influence on Freud and Doyle, but more salient is their shared interest in using small details (a hand, an involuntary tick or a miniscule clue) to understand larger phenomena (a work of art, the inner mind or a crime). Ultimately, Ginzberg advocates intuition and conjectural knowledge, promoting a more inclusive and sensual way of understanding the world.

But what does this have to do with the exhibition?

Lauren O’Connor-Korb’s Seen Not Heard is a simple walnut box hanging person-height on the wall that features a lone silicone ear that produces a shushing sound when approached. It recalls diagrams by Morelli and is one of the more overt formal connections between the text and the show. Further, O’Connor-Korb seems interested in marginal parts of the body, and this connects her to Morelli on a conceptual level. Though Morelli cared very much about the differences between Fra Lippo Lippi and Botticelli’s distinct ways of rendering ears, such parts are rarely the focus of art historical description or the sole subject of representation. Though making the viewer feel monitored — aware of her bodily presence in the gallery space — seems paramount, Seen Not Heard also possesses a “clinical” aesthetic that has the aloof chill of a dissecting table.

Dan Vu’s series evoke organs and tumors. For example, Test Subject #001, a bulbous, peach-hued lump marked by spots and porous surface indentations, rests on a mirror as if specimens in a histology laboratory. Nearby, Ellie Dent’s Don’t Worry consists of hanging scrolls that unfurl to reveal bruise-like marks and bandages. Dent’s Dead Weight, a long white sheet suspended from a pole (like those used for IV bags) unfurls into a bucket containing dark red fluid, staining the otherwise pristine fabric and suggesting bodily trauma.

Deepanjan Mukhopadhyay’s Outsourced: Embryo Transplant Phase reads as an overt commentary on foreign parents hiring women in countries like Thailand and India to carry a fetus to term. A grocery cart, a stand-in for the maternal body, contains a tablet with a sonogram image on its screen. Above, an empty mobile hangs in midair, signifying absence and the eventual separation of the child and surrogate. Critics question the agency of the women involved in this practice, suggesting that poverty or intimidation leaves these women little choice. Similar in its political undertones, Johanna Norry’s Sweater 1173 and Sweater 1105 consist of garments made of recycled cashmere and imply scathing judgment on cruel animal practices. Livestock ear tags mark the spot where a logo would be — often an animal like an alligator or jockey and horse. This also positions the wearer as a bovine pawn in a consumer culture.

Though working in disparate modes, O’Connor-Korb, Vu, Dent, Mukhopadhyay and Norry allude to the human body without depicting it. Similarly, Stephanie Sutton’s three-video channel projection, Tea Ceremony, insinuates the body, albeit in a disembodied form. The tripartite work shows three screens: a disembodied hand deposits a granular substance onto a shiny surface, a woman mowing a lawn and a cropped image of a woman’s chin, neck and shoulders speckled with drops of sweat. A computerized voice describes physical sensations associated with being overweight (e.g. “legs can’t completely cross”). Text provided by UGA PhD candidate, Brooke Leeton, explains that Sutton wants to reclaim the term “fat.” It strikes me that this effort is akin to Lindy West’s fat-body-positive, feminist writing.

Many of the artists described thus far draw attention to flesh, bruises, blemishes and internal organs, requiring a close investigation of individual (and sometimes internal) parts. They deal in fragments and symptoms, that is, in Ginzberg’s terminology, “conjectural” knowledge. Despite the predominance of these anthropomorphic works — one might call them pseudo-medical — there are other types of conjectural investigations at work, for example, Stasiak’s furniture-like sculptures mentioned above.

Megan Burchett’s Ice Cream, Baby looks like evidence from a car wreck. Draped over a brass pipe, a sheet of broken windshield looks like a melting version of its namesake. The simultaneous evocation of a disaster and sugary dessert suggests both pain and pleasure. A similar juxtaposition is at work in Ally Christmas’ video Playback. It begins with her father narrating her actions as a toddler to the camera. As if foretelling the artist’s later engagement with media, he recounts that she “just ripped the paper out a book for about the tenth time.” A caption informs the viewer that this is rediscovered footage, the only extant record of her parents prior to their divorce. Next, a question appears: “What is it about home movies that makes nostalgia feel so toxic?” Like Burchett’s sculpture, sweetness vies with darker undercurrents.

Playback switches between the rediscovered video and later photographs. Christmas edits the latter on-screen, digitally removing her body from the scene. The erasure of the artist from the pictures suggest various things: an alternate timeline without her, the tabula rasa of infancy, the fantasy of a return to childhood and — that which the historian actively fights — the tragedy of forgetting.

According to Ginzberg, the historian is condemned to create a narrative from series of irrecoverable events only knowable through fragmentary artifacts. He connects the historian’s plight to that of the diviner: though one looks backward and the other forward, both extrapolate in order to understand that which they cannot see. Similarly, Christmas deals in the immaterial both in form (digital) and content (the past). Yet rather than explicating she destroys evidence of her prior life.

The altered photos and videos of Playback remain clues to an unsolvable puzzle. Like much of the work in Camblin’s intelligently curated exhibition, it poses questions without solid answers. The artists of Clues & Scientific Method might be understood as intuitive empiricists perversely search of truth in a “post-truth” era.