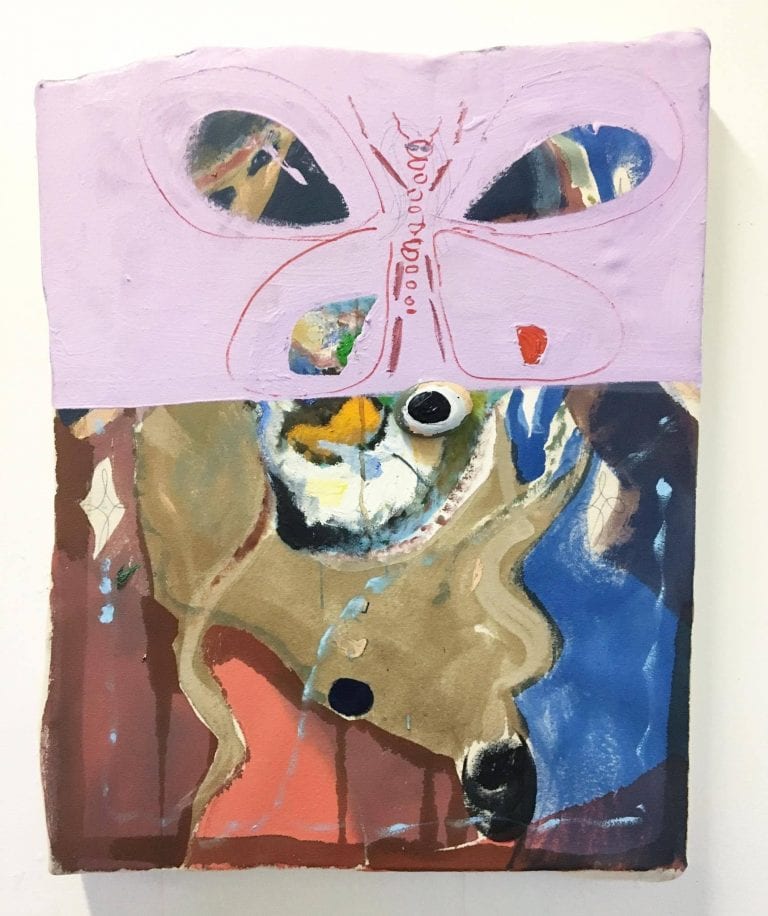 Review: though small, “Youth Movement” proves to be remarkably successful

Youth Movement, at Poem 88 through March 11, is an exhibition of emerging artists curated by owner Robin Bernat that reveals more about her implicit curatorial interests (in the many ways that nature and human imagination interact) than about the artists in the show, although the lack of artist context is from factors beyond her control, including the limited size of the gallery. But through Bernat’s choice of the handful of works in it, Youth Movement presents a definite set of shared interests in how our culture approaches and alters the natural world: in a way that is quite different from Poem 88’s previous show by Cynthia Farnell (in which real flowers were arranged into digitally created cascades and bouquets), this is a show about nature and artifice — “nature” as in plants and animals, not in the broader sense of “nature vs. culture.” Bigger biological issues are subjects for another show.

Lindsey Pearson’s fake: orange plant and fake: untitled number 26, which judging from Pearson’s website are the only two works in the FAKE series, are about the obviously artificial vs. the convincing replica, or at least that is what they seem to be. The luminously red-orange potted plant has been pushed over, presumably to demonstrate further that there is no soil and root system, although the unnatural color alone seems to have made enough of a point. By contrast, the handful of long-stemmed flowers being hurled into the air could almost be akin to Farnell’s digitized real flowers cascading on a similarly black background. (This raises the question of whether Pearson’s flowers are both artificial and artificially arranged via photo manipulation, but there is no evidence onsite to answer this question.)

The blatantly artificial radioactive greens in Victor Perez’s mixed media paintings are aptly described in one case by the title Neon Algae; the blandly titled Landscape is clearly anything but, its geometry of rectangles barely interrupted by a surface that vaguely recalls yesteryear’s Astroturf. His artworks are contemporary versions of abstract painting that thoroughly incorporate amusement at our own tacky replications of the natural world, which is the factor that links this work with Pearson’s.

Audrey Hynes’ exploration of real-world landscape, by contrast, commemorates our management of nature, in a video that is something like an elegy for the demise of an invasive species in south Florida. Melaleuca, a tree notorious for its voracious water requirements, has colonized and drained large parts of the Everglades and adjacent territory, and is now the subject of an extermination program. The results of this are documented in Hynes’ Untitled, a temporal gesture of being (Four Parts). Unfortunately, there is no way to learn the backstory from the video itself or its title, nor is there a supplementary statement setting forth these facts. All that the viewer encounters is a view from a car window of trees in various conditions of ill health, plus the reflection of the video image in a mirror.

The exploding fireworks around the heliconia flower in Hynes’ color inkjet print untitled, heliconia (disappearing lands) is similarly enigmatic. I presume the image relates somehow to deforestation, but a perusal of a list of the native range of the 199 known species of heliconia doesn’t reveal whether any of them are under threat from loss of habitat. In fact, rather than looking threatening, the photograph looks rather celebratory, something like a New Year’s Eve for tropical flora.

The high point of the show, and not simply because they dominate an entire wall, are Hannah Tarr’s paintings. These three remarkable works fit into the show’s implicit nature-and-artifice theme in quite literal ways — the depictions of the loosely rendered snake and precisely delineated mountain range in snake/face, for example. But the point of the paintings appears to be innovative composition for its own sake, because the works’ most spectacular feature is the sheer variety of ways in which Tarr deploys stylistic devices successfully. No two of the paintings accomplish their visual goals in the same way, yet the general tone established in each makes the trio function harmoniously when placed in close juxtaposition.  To some degree, they are united by their shared evolution from neo-Expressionist gestural drawing, but it is not always the same type of gestural drawing.

Youth Movement is a remarkably successful show, but the small selection of work leaves the viewer with little choice but to assume the role of a formalist critic looking closely at art that deserves the closer look, but that also incorporates conceptual elements that can’t be puzzled out by looking. A few conceptually oriented clues would have been helpful in comprehending this work, but even the artists’ websites don’t offer much in the way of elucidation. The only solution lies in the kind of direct question-and-answer that is only possible when the artist happens to be present in the gallery since viewers almost invariably ask different questions from the ones that occurred to the gallery owner.