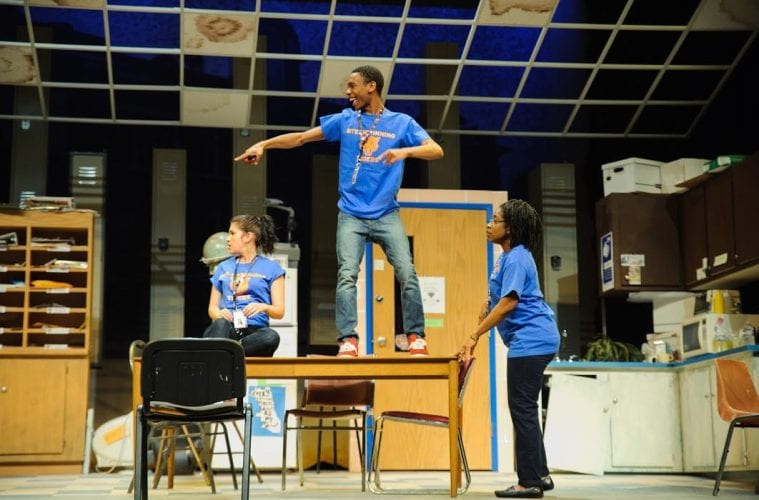 Review: True Colors’ “Exit Strategy” is sound and solid, but yearns for a deeper commitment

The teacher’s lounge is traditionally a place that operates under the Vegas rule, but in Ike Holter’s play Exit Strategy, at True Colors Theatre through March 19, he takes the audience into a space most people never saw in school. As a dysfunctional family of Chicago public school teachers prepare to start the school year, they learn that Tumbldn High School will be closing. In the beginning, they are content not to fight it since, for some, this is déjà vu. But when an eager student named Donny starts an Indiegogo campaign to save the school, and the overzealous vice principal supports him, the teachers find a new urge to fight.

Tackling current political issues is Holter’s niche — his other play Hit the Wall is about the Stonewall riots in New York. Exit Strategy was first produced in Chicago in 2014 and has been lauded across the country, even winning the prestigious 2017 Windham-Campbell Prize from Yale University. So it is unfortunate that the True Colors production does not quite settle into itself. Holter’s writing style is reminiscent of an NBC sitcom where everything is setup, punchline, setup, punchline, which in this production feels really forced. Holter has crafted delightfully distinct characters and really gets at the grim circumstances in the school by pointing out the 40 percent graduation rate, gangs recruiting students at the nearby 7/11 store and rodent infestation.

Despite the ensemble cast’s commitment to the work, something about the pacing is off. The play starts off strong with a raw conversation between vice principal Ricky Green (Matthew Busch) and revered teacher Pam Morse (Tess Malis Kincaid). Kincaid delivers one of the play’s best scenes within the first ten minutes of the production with great comedic timing and acerbic wit. After that scene, however, the play falls into a lull except in the scenes when Diany Rodriguez and Lau’rie Roach come onstage. Rodriguez is a joy to watch as the passionate but fed-up lush of a teacher named Jania. Roach’s energy is infectious and much-needed, though his acting falls short of impressive.

Moriah and Isabel Curley-Clay, who are known for impeccable hyper-realistic sets, went a bit overboard on this one. There are projections in the background, graffitied lockers suspended from the ceiling and the teachers’ lounge is teeming with junk — including old holiday decorations, projectors, globes and boxes — but somehow there is never enough coffee or sugar. There is so much stuff on stage that it distracts from the actors, and director John Dillon does not have the cast interact with much of it. Many of the scenes take place center stage at a table with people sitting or standing; no one really goes to the file cabinets or mailboxes, which seems like a missed opportunity for more stage business.

Holter’s message in the play about what a school means to a community and the lack of investment in public schools is an important one. And it is timely — the recent appointment of Betsy DeVos as Secretary of Education and metro Atlanta’s own school controversies prove that. Plus, the city’s ever-increasing income inequality gap will likely worsen this issue in certain neighborhoods. Educators who work in those environments will likely be reminded of their experiences if they see this play, but this production does not pack the same punch as the script.