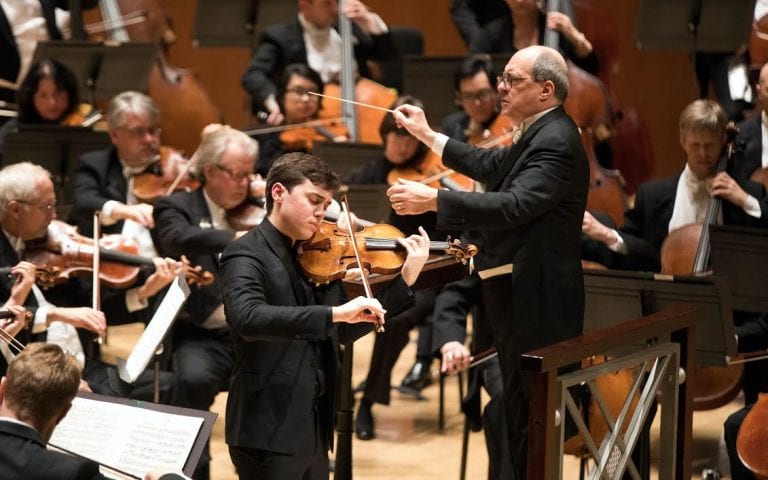 Some audience members experienced unexpected, abnormal traffic delays in advance of Thursday’s concert as police blocked off the intersection of Piedmont Avenue at 14th Street and the immediate surrounding area while they investigated a “suspicious package.” Traffic was diverted through the Ansley Park neighborhood, sending portions of the area into inordinate gridlock. Authorities later reported the “suspicious package” — a purple backpack — was nothing more than what it appeared to be. Despite the frustrating area jam-up, the ASO concert proceeded on time.

The concert opened with “Dreamtime Ancestors” by Christopher Theofanidis. Theofanidis is part of the Atlanta School of Composers created by Spano and the ASO to encourage new works, and he carries the aesthetic range that membership tends to represent. Although inspired by Australian aboriginal creation myths, Theofanidis’ work does not try to play any pretense of superficial “world music-flavored” eclecticism games. It is, instead, cosmopolitan American in demeanor and style, relatively conservative within that scope in its language. All in all, it is a noble, occasionally majestic and often lyrically melodic piece which, while not pushing the edges of sensibility, is a fine example of Theofanidis’ considerable craft.

Although “Dreamtime Ancestors” may not have quite the same expansive thrill as Theofanidis’ similarly creation-themed “Creation/Creator” — which Spano, the ASO and its chorus, and guest vocal soloists will reprise later this month (March 23 and 25) in preparation for performing it March 31 at the Kennedy Center in Washington, D.C. — it holds its own well as part of the composer’s total catalog. It makes for good listening that requires no hesitation on the part of the listener, with or without its extramusical premises.

Next up, American violinist Benjamin Beilman joined Spano and the ASO on stage to perform the Concerto for Violin and Orchestra in D minor, Opus 47 by Jean Sibelius. These concerts mark the 27-year-old violinist’s ASO debut.

Exactly one year ago, violinist Augustin Hadelich performed Sibelius’ Violin Concerto with the ASO and guest conductor Marc Piollet. Before that, in May 2012, ASO concertmaster David Coucheron performed it for a subscription concert with Spano at the helm.

However too frequent such a revisitation of the work may seem at first glance, it is no real surprise to see the ASO yet again program Sibelius’ Concerto with Beilman as soloist since that is the work with which he won First Prize in the 2010 Montréal International Musical Competition.

Although Thursday was his debut appearance with the ASO, Beilman and Spano have previously collaborated in concert. In 2015, they performed Jennifer Higdon’s Violin Concerto with the Philadelphia Orchestra in a three-concert stint that also included Higdon’s “Blue Cathedral.”

Sibelius’ Violin Concerto is at once highly virtuosic but profusely melodic, so it was a great vehicle for Beilman’s passionately canorous playing as well as his technical acumen. The solo and orchestral part are well-balanced — of equal substance rather than having a nominal orchestral accompaniment — so the work comes across as more symphonic in scope and musical intent. The violin cadenza in the first movement, for example, serves in the structural place of a development section rather than just an episode for the soloist’s display. Even so, Beilman was well heard above the orchestral forces.

His rendering of the slow second movement was poetic in its expression, and the final movement — which musicologist Donald Tovey, in all fondness, called a “polonaise for polar bears” — for all its formidable difficulty, did not descend to mere technical show in Beilman’s hands; the solo part’s musicality was never overshadowed by its brilliant gymnastics.

Following the sincere ovations, Beilman returned to the stage to play a far more introspective encore, the “Largo” third movement from J.S. Bach’s Violin Sonata No. 3 in C major.

After intermission, the concert concluded with “Harmonielehre” by John Adams — another instance of the ASO celebrating the American composer’s 70th birth year by peppering his works throughout the season. “Harmonielehre” is notable as Adams’ seminal orchestral work, its premiere in 1985 by the San Francisco Symphony launching his extensive involvement in composing for the major orchestral circuit, resulting in Adams being the most-performed living American composer today.

Spano and the ASO gave “Harmonielehre” a creditable, energy-infused rendering of the now-classic work.