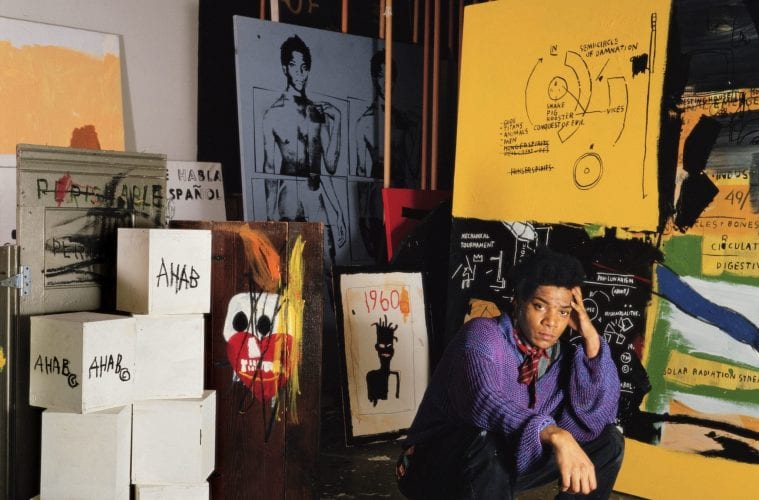 “The black person is the protagonist in most of my paintings. I realized that I didn’t see many paintings with black people in them.”

Twenty-seven years after Jean-Michel Basquiat uttered these words, the United States finds itself in the midst of a loud national conversation about the importance of representation, cultural appreciation and diversity. Protesters’ standing in the middle of the street holding signs that say “hands up don’t shoot” and disrupting presidential candidates’ speeches are the subjects of today’s headlines. Under hashtags like #BlackLivesMatter and #OscarsSoWhite, thousands of posts, images and tweets fill news feeds, stressing the point that positive images of people of color in media and art might translate to better treatment of oppressed groups.

Born in Brooklyn in 1960 — another turbulent time in U.S. history — Basquiat created hundreds of paintings and drawings throughout his short, impressive career focused on those very themes. Many of the social ills that he observed in the 1970s and ’80s as a result of Reaganomics — such as unfair housing practices, poor access to quality food and bigoted treatment toward people of color — are still the source of national strife today. In Basquiat: The Unknown Notebooks, on display on the second floor of the High Museum’s Wieland Pavilion through May 29, visitors have the opportunity to read about the headlines and observations that inspired those great works. Though there are many differences between today’s Black Lives Matter movement and the the Civil Rights Movement of Basquiat’s youth, the cry for equity — to be seen as the protagonist and not as the antagonist in the American narrative, remains the same today as it did in the 1980s when Basquiat was at his peak.

There are 160 pages from eight notebooks within the exhibit. Individual pages have been removed from their composition notebooks and lined up side-by-side in a glass case for observation. Many of the works in the exhibit are from the Brooklyn Museum, including photos of the artist taken by his contemporaries. In addition to the notebooks, a three-minute clip from the documentary Downtown 81, about New York street artists, is projected in the gallery area. Basquiat started out as a street artist, tagging under the name SAMO© (same old shit), and the clip depicts him reenacting spray painting a cinderblock wall.

The exhibit also contains the painting Untitled (Cadmium), 1984, from the High Museum’s collection, which features the torso of an armless black man against a bright orange-red background with two Sacred Hearts next to him. Symbols of Catholicism, along with the names of Louis XIV and Marie Antoinette frequently recur in Basquiat’s work — which is not at all random. Basquiat was the child of a Puerto Rican mother and Haitian father, and the French monarchy and colonialism played a large role in his heritage, and therefore his identity. Basquiat was very conscious of his ethnic identity and how that affected the way he moved in the world. Before terms such as respectability politics, colorism, cultural appropriation and reclamation were attached to a hashtag as a way to describe the diasporic experience, Basquiat created his own metaphoric language. His language is influenced by everything from the Bible and Mark Twain to grocery store aisles and subways, and every letter in his notebooks reflects the way he dissected his own black experience.

More poignantly, the notebooks are a peek into the artistic process in the moments before colors collide with canvas. It is common for artists to have multiple journals in progress at a time, and for them to scribble down observations and notes that may or may not be used in a future work. Basquiat was used to finding his inspiration on the subway and walking down the street when a stanza might come to mind that had to be scribbled down. In his case, a phrase that keeps coming to mind can turn into a masterpiece, however, which scribbles from his notebooks inspired which pieces of art is not entirely clear in the exhibit. It is more about understanding the mindset that led to a body of work, as opposed to being able to match a specific line from a notebook to a specific drawing.

Some of the writings are just lists of random words or headlines from the newspaper. A lot of the sketches in the notebooks look like nonsensical scribble scrabble, but those random notations about ordering home fries at a diner or seeing roaches crawl in an oven led to Famous Negro Athletes, 1981 and Untitled (Crown), 1982, for example.

Some of the “scratches” are more poetic — art in themselves — such as a selection from Notebook #7 from 1983 called “A Prayer”:

“Nicotine walks on eggshells medicated … breathing into his lungs 2000 years of asbestos.”

“I’ll give 20LBS of oxygen for that drawing/You sell a human/You’ve done this scratching/This was not blank.”

These lines are not pieces of a to-do list or seemingly unrelated words on a page like many of the other writings; they detail an observation and convey an idea on their own.

Basquiat called himself an anti-artist, staunchly against materialism, though that did not stop him from being a conscious citizen of the world, which is something he struggled with throughout his life. In one notebook he writes, “I feel like a citizen/it’s time to go and come back a drifter.” He died in 1988 at the age of 27, but Basquiat’s influence in African-American art and in popular culture has lasted far past his years. The cover art for Barbadian pop singer Rihanna’s latest album Anti features a little girl holding a balloon with a crown over her eyes — the crown is a recurring image in Basquiat’s paintings. A recent photo used to promote the album is of the songstress donning braids that resemble his signature dreadlocks, a black suit jacket and white button down shirt in the same style he wore in many photos. Perhaps, one of the most ironic things about the influence of this anti-establishment artist is that his commercial success is undeniable, and his images are still a viable product in the pop music industrial complex. The High Museum gift shop is even selling everything from Basquiat scarves, earrings and tote bags to flip-flops and nail art stickers.

Basquiat’s notebooks are full of thoughts and ideas to unpack, and since for an artist the whole world is inspiration, everything from gun violence to the price of fame made its way into his scribbles, and subsequently his work. Basquiat grew up and created in a world that saw black men as less than human, and the intimate look into his thoughts that the notebooks provide renders him, and therefore others who look like him, as being deeply human. This is important, especially now, because his sustained relevance proves that something and someone don’t have to look like the mainstream to be embraced. The notebooks ultimately paint a portrait of the artist as a young man, or more so, a portrait of the young man as an artist.