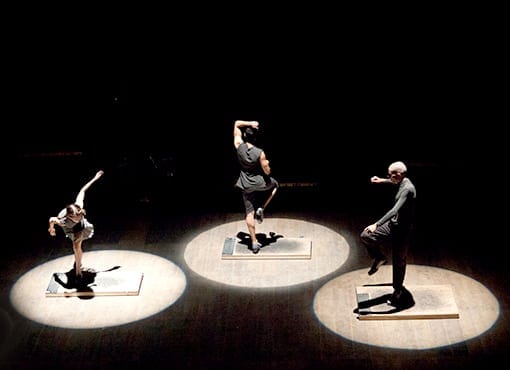 Michelle Dorrance may be the most humble person in dance. In September 2015, she became the first tap dancer to receive the prestigious “genius” fellowship from the MacArthur Foundation but says, “I don’t know if I deserve it.”

She then gives a shout out to everyone else: tap greats like Jimmy Slyde (“Brilliant mover, better than we are.”), movie musical tapper Eleanor Powell (“Oh my gosh, is anyone better in that realm?”), Savion Glover (“He revolutionized tap choreography.”), contemporary tappers Dormeshia Sumbry-Edwards and Brenda Bufalino (“A living master.”), and even vocalist Aaron Marcellus, the American Idol finalist who performs with Dorrance Dance at the Ferst Center for the Arts on March 9 and 10. “He should be touring the world like Beyoncé,” Dorrance enthuses. “I can’t believe he’s singing with us.”

Dorrance and Marcellus, an Atlanta native, did a brief duet together at the Off The EDGE festival at the Rialto Center for the Arts in 2014. The Ferst Center engagement marks the first time her company of dancers and musicians has performed in Atlanta.

Dorrance, 36, is a slim, gangly woman with long hair, arms like noodles and a toothy grin. A brilliant technician and superbly innovative choreographer, she talks almost as fast as her feet move, as excited about neuroscience, flooring and health insurance as she is about the history and future of tap.

“People say I am doing something new,” she says, “but we are deeply rooted in the tradition.” Maybe the context is new, she admits, but the form has always been ripe with possibility, beginning with the shoes. The original shoe was leather-soled, Dorrance explains, and has “a beautiful sound, such a range.” In SOUNDspace, a section of which will be performed at the Ferst, “a gentleman in the company does a leather-soled solo. It is so delicate. The sounds have such richness and depth.” In ETM: The Initial Approach, the dancers wear the more familiar aluminum taps and dance on small wooden platforms, each with a textured plate on one side like you find inside service elevators or street grates. Every so often, they slide the edge of one shoe along the plate creating a unique, rasping sound.

Dorrance dancers have also performed in socks and bare feet, creating vastly different tonalities. “Having a dynamic range is important to me,” she says. “So is creating both a visual composition and a musical composition that I can listen to with my eyes closed.”

The Ferst program includes tap performed with and without live music. One of the three musicians is Dorrance’s brother, Donovan, who plays guitar, does backing vocals and, with Gregory Richardson, composed the score for the Dorrance’s 2015 work Myelination.

“Myelination is about brain function,” Dorrance says. Myelin is the fatty layer that forms around neural pathways that are used frequently, such as when you practice something over and over. Tap dance, for instance. It’s inspirations like this that make Dorrance unique in her field and give her an opportunity to shower praise on yet another person: her dad, who gave her a book about myelin. “He’s an incredibly successful women’s soccer coach and reads five books at a time.”

The MacArthur award is the most recent in a string of recognitions Dorrance has received. She has a Bessie (the Oscars of dance, for “blasting open our notions of tap”), and was the first tap choreographer to receive awards from the Princess Grace Foundation and the prestigious Jacob’s Pillow.

The first installment of the $625,000 MacArthur prize allowed her to pay off the company credit cards. Next is health insurance for her dancers. “It’s not a sexy answer, but it’s the truth.” If there’s enough money left, she wants to get a bigger and better rehearsal space, “not a teeny little dirty space like we are always relegated to,” she says. “There are beautiful wood floors in New York, but they don’t want you tap dancing on them. Tap dancers are at the bottom of the dance totem pole, dance is at the bottom of the arts totem pole, so we are often disrespected and asked to dance on less than adequate surfaces. This would never happen to a ballet company.”

Dorrance Dance is currently raising money to buy a customized portable dance floor. Most theaters have proscenium stages with masonite or marley flooring, neither of which is appropriate for tap. For the Atlanta engagement, the dancers will perform on a wooden floor rented from the American Tap Dance Foundation.

Historically, primarily because of racism, tap has been considered entertainment and not an art form. “People didn’t want to let it breathe or give it respect,” Dorrance says. She hopes the MacArthur, which honors people from diverse disciplines including science and philosophy, will change that. “I don’t think of the MacArthur award for me,” she says. “I think of it bringing respect and honor to tap. I love the idea that a writer, a neuroscientist or a philosopher, who would have dismissed tap before, might now see it as a culturally significant art form.”