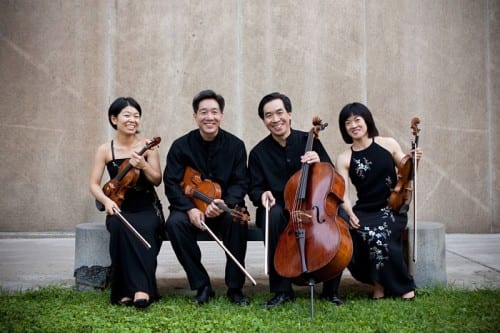 The Ying String Quartet played an engaging program of music by Arensky, Moravec and Beethoven last night at Kennesaw State University’s Bailey Performance Center. It was the final note of their four-day KSU residency, which included a series of master classes for students and a pair of community outreach performances.

The quartet was formed in 1988 by four siblings — violinists Timothy and Janet, violist Phillip and cellist David Ying — while they were studying at the Eastman School of Music. They captured quick national acclaim with an innovative “rural residency” in Jessup, Iowa, a program sponsored by the National Endowment for the Arts. The group’s roster remained unchanged for 20 years, until Timothy Ying left to start a business venture. The vacant slot was filled for one year by Frank Huang (now concertmaster of the Houston Symphony Orchestra) and is now held by first violinist Ayano Ninomiya, who joined in 2010.

Saturday night’s program began with the String Quartet No. 2 of the Russian Anton Arensky (1861-1906). Originally written for the darker combination of violin, viola and two cellos, its elegiac opening evokes Russian Orthodox choral music, both with its harmonic texture and a theme from old Russian psalmody, which also closes the movement. The second movement, seven variations on a children’s song by Tchaikovsky, is Arensky’s best-known music, thanks to a transcription for string orchestra. The work’s finale features a fugal development of a patriotic Russian hymn-tune, “Slava Bogu no nebe Slava” — the same tune more famously featured in the coronation scene of Modest Musorgsky’s opera “Boris Godunov.”

The Arensky was followed by the “Anniversary Dances” of Pulitzer Prize winner Paul Moravec. Moravec’s excellent music is uptown Manhattan, complex and expressively detailed. The Yings, for whom this work was commissioned, played with depth and conviction. The cork board of history is likely to eventually find “Anniversary Dances” thumbtacked somewhere between the quartets of Béla Bartók and those of Elliot Carter — more approachable than the latter, but easily admired by connoisseurs of quartet music.

Following intermission, the Yings returned with the second of Beethoven’s “Razumovsky” quartets. Arguably the least programmed of the three in the composer’s celebrated Op. 59 set, the choice in this instance was clear: the same Russian tune used by Arensky is found in the middle of the Allegretto third movement. As with the other works of the program, the Yings played with both attention to detail of ensemble and energetic enthusiasm — so much so that cellist David Ying almost fell off his chair on the final chord of the Beethoven with the breadth of his bow stroke.

A delightful, unlisted encore capped off the evening: “Pizzicato” by Chinese-American composer Vivian Fung. Entirely bowless, Fung’s composition, from 2001, makes use of a range of pizzicati types plus extended techniques such as slapping all four strings to the fingerboard and tapping the bodies of the instruments. The piece is an ebullient interplay of rhythm, with allusions to both traditional Chinese instruments and Indonesian gamelan.

The Yings cheerfully greeted the audience in the lobby afterward, autographing copies of their latest CD, released in late October, featuring both quartets and a piano quintet by Arensky, bringing the evening full circle.