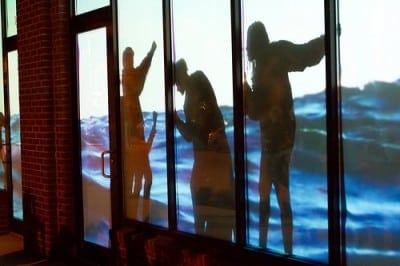 Today, ArtsCriticATL and BURNAWAY launch a new collaborative series about the history of the arts in Atlanta, titled “Memorial Drive.” Putting a fresh spin on the old phrase “memory lane,” the title also honors its namesake, the long road that runs from downtown Atlanta to Stone Mountain, passing in front of Oakland Cemetery and the former stomping grounds of Martin Luther King Jr. nearby. The series explores the theme of memory, holding that, in order to move forward as a creative community, we also need to look backward. Both websites will post contributions to the series, and we will cross-link. We invite readers to follow, comment and offer ideas for further topics. — Catherine Fox and Jeremy Abernathy

Atlanta, most agree, is in the midst of a transformative moment. The profusion of temporary public art projects is creating a feeling of momentum, and the signs are positive that a cultural shift is in the wind. But how does it measure up against the past? Is it sustainable? Is it culturally relevant? Does Atlanta’s arts ecosystem have the will to address today’s social conditions? Has the Occupy movement galvanized local artists?

There have been some interesting new developments, but most of today’s public interventions seem tame in the context of Atlanta’s history. In 1981, artist Robert Morris dynamited a hole in Piedmont Park for a work titled “Sketch for a One-Megaton Tactical Weapon.” The project was part of the Arts Festival of Atlanta’s Site Works program, a national program that placed the city on the cultural edge. The festival, which is now defunct, also hosted Fred Wilson, an African-American artist who placed a concrete little black fishing boy on top of a classical Greek standing figure in Lake Clara Meer.

It’s difficult to top Morris for audacious use of a public park or Wilson for the brazen planting of pointed racial commentary in the heart of the New South. But Atlanta artists of the period were pretty gutsy as well. Does anyone remember Bill Paul’s window displays of leather fetish crosses, Bibles and penises creating a stir in the early 1980s? How about Criss Mills’ live chicken running back and forth from electrified wires inside an ark made of chicken wire at one of the first Mattress Factory shows? Then there was E.K. Huckaby’s taxidermy “Cerberus and Cartesian Dog” at Small Press Books in Poncey-Highland.

In the late 1980s, Georgia Tech architectural students led by Brad Brooks ran an “Architectural Jihad,” posting signs on abandoned, boarded-up properties in Midtown to call attention to the decaying infrastructure of a modern metropolitan area and perhaps save some historic structures. “Photo Graffiti” was another artist initiative, which used photo-based images pasted onto walls and boarded-up windows around town.

Plenty of Atlanta artists tweaked the establishment and seemed less afraid of the consequences. Even the political and business structures seemed more tolerant of challenging work. Living Walls, now in its second year, has surpassed previous such efforts with a more complete approach to understanding the progressive use of public space through symposiums and a diverse group of invited local, national and international artists. But a great deal of Atlanta art has turned decidedly nice. It lacks the agency and urgent demands of responding to the breakdowns in our economic, social and political systems.

This malaise is hardly limited to Atlanta. Artists in general are surprisingly behind the curve in really measuring their craft against current socioeconomic conditions. Writing about the New York scene in The Village Voice, Christian Viveros-FaunA observes, “Like banking and government, there is little appetite today for wholesale reassessments. Take the current art world, for example: inside its galleries, museums and studios, folks have found it blindingly difficult to ask important questions about a crisis they have yet to fully acknowledge.” It’s beginning to feel as if we are all witnesses and players in a great unraveling.

Is part of this the legacy of the “culture wars” of the 1990s? Did the political climate of the ’90s squash the spirited exchanges necessary for art to be relevant on the local level? The National Endowment for the Arts was then under assault for funding of controversial work. Senator Jesse Helms fanned the flame by flashing Robert Mapplethorpe’s photographs in the halls of Congress.

Society remains intolerant of challenging art. When you can’t install an abstract mural without a dust-up, as happened recently in Inman Park, it’s difficult to envision a really progressive, cutting-edge arts scene that questions cultural values on the necessary global scale.

Instead of challenging the system, we are decorating our failures. “Elevate,” at Underground Atlanta, seemed especially designed for the wrong intent. In this depressed economy, the Atlanta Office of Cultural Affairs identified some money to promote the most seriously depressed real estate in the city, at the heart of downtown. Is the role artists are playing here window dressing for powerful real estate interests? Is this the role for the Office of Cultural Affairs? What truly transformative and urgent works have been part of “Art on the BeltLine”?

As I see it, the Metropolitan Atlanta Arts Fund emerged during the culture wars as a way to separate the philanthropist-contributor interested in promoting culture from any possible controversy that might occur. But what it really did was install a gatekeeper who decides which organizations get short-term support and long-term philanthropic connections needed for larger funding. I believe this move devastated some of the personal connections among artists, cultural producers and their supporters, a bond that the arts need to survive and flourish. We need to rebuild these connections.

Although Atlanta’s arts scene has grown, the voice of culture has diminished over time. Former Mayor Bill Campbell loathed the arts community. Former Mayor Shirley Franklin did not walk the walk. Though she was touted as the “arts mayor,” she virtually gutted the “percent for art” ordinance. Kasim Reed, our current mayor, has made some strides, but expectations are so low that arts leaders cheered last summer when he came to the rescue and saved the OCA’s meager budget. When you are down so long, everything looks up.

Yes, this seems like a promising artistic moment in Atlanta. The maturation of FLUX, the annual one-night arts festival, and Living Walls are the best examples. FLUX 2011 started to feel thematically coherent and grounded. “Water Will Be Here” by Eric Corriel; Jeff Demetriou’s and Fake Love’s “Home Sick,” the wall crumbling to Eden; gloATL’s bulbous, sickly dancers; Craig Drennen’s big-headed rocker with “AWFUL” written under the stage — these works contributed to a sense that perhaps ATL is arriving. Yes, world, we are underwater and breaking down metaphorically in so many ways, and you can see it reflected in our cultural work. 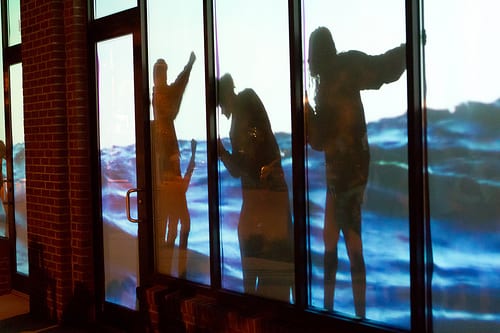 Eric Corriel's video projection "Water Will Be Here," at FLUX 2011.

FLUX and temporary public art in general have blossomed over the past three years largely as a result of one passionate person: the ubiquitous Louis Corrigan. He has good intentions and the money to back his ideas. Will his generosity and vision lead to longer-term support for Atlanta’s community of artists? If he remains the lone patron, young artists in the community will grow to realize that the ceiling is not far above their heads.

On a national level, Nato Thompson and Creative Time, a New York-based group, are on the edge of this urgency; Thompson is involved in the Occupy Wall Street protests. If Corrigan’s Flux Projects, which sponsors the FLUX festivals, wants to be more like Creative Time than La Nuit Blanche, it needs to add more money and continue with the curatorial gravitas that was evident in some of its 2011 projects.

Atlanta needs to differentiate itself to be competitive in the global marketplace. It is imperative that the arts be linked with the business and political structure, and that all are willing to take risks. Embracing the challenges of work that pushes budgets and boundaries should be encouraged. Art must reflect the urgency of these times. This is a measure of a city’s vibrancy and progressive freedoms.