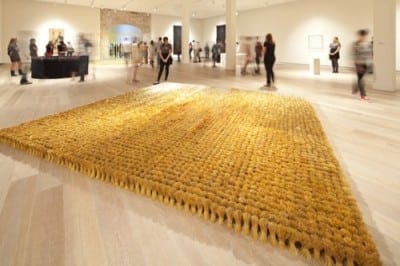 Review: SCAD’s new Savannah museum is charming, but a challenge for curators

The Savannah College of Art and Design, which is recognized for its restoration and reuse of its home city’s historic buildings, has unveiled its latest such project, the SCAD Museum of Art. Built along the ruins of the Central of Georgia Railroad’s 1853 depot, the space reclaims an area in the Savannah historic district that had fallen into serious disrepair and provides some wonderful new facilities for students.

Savannah-based architect Christian Sottile, a SCAD alumnus, deftly acknowledges the building’s past in his design. Parts of the crumbling exterior walls were incorporated into the concrete façade. Old archways, which once supported the railway’s storage shed, now divide the space into different galleries. Old wooden planks from the depot’s ceiling cover the walls of the auditorium. The most visible remnant, however, is the original long, narrow footprint of the storage shed and tracks, which runs the equivalent of a full city block.

The entrance leads to a light and airy atrium. From there, students can glide up a sweeping staircase to second-floor classrooms and permanent collection storage. On the main level, museum visitors can access a 250-seat auditorium, a small café and shop, and a protected courtyard that can be used for performances, projections or the display of outdoor art. One can also see the long vista through the main galleries, which are a series of four similarly proportioned rectangles leading one to another through a central corridor of brick archways.

The first gallery is dedicated to the Walter O. Evans Collection of African-American Art. Of the roughly 80 pieces that Evans donated to the college, 35 are on view, and there are some real treasures among them. But the dedication of this first space to a historical (it spans 150 years) and culturally specific collection feels strange. Curatorially, it sets an immediate challenge to connect it with the diverse and primarily contemporary exhibition program for which SCAD is known. Isolde Brielmaier, the new chief curator for SCAD, whose job will be to oversee the museum, gives a small hint of how she might handle this in the future with an astute pairing of Romare Bearden’s “Reclining Nude” (1979) and Wangechi Mutu’s “Homeward Bound” (2009) in the entrance.

The second gallery is divided into two unequal spaces. The smaller – named for André Leon Talley, the flamboyant Vogue editor, who has been a longtime friend to SCAD — will be devoted to style and design. It is separated from the rest of the gallery by a half-wall, necessitating a conversation between exhibits on either side. For the opening, the curators paired iconic fashion pieces donated to SCAD by past recipients of the André Leon Talley Lifetime Achievement Award with eight large paintings by Kehinde Wiley. The presentation does not do justice to this inspired juxtaposition, however: eight Wiley paintings command an open airy space, while nine dresses and a rather bizarre video of Manolo Blahnik on Martha Stewart’s TV show are squashed into a space one-third the size.

The relationship between art and architecture fares better in the third gallery, a corridor-like space that shows off an enfilade of archways and a temporary video room. For the opening, the video room featured “The Crossing,” an exquisite projection by Bill Viola co-commissioned by SCAD in 1996. Despite all the technological advances in the medium since that time, the piece still feels fresh and innovative — the gift of a great artist. Alfredo Jaar’s subtle and powerful “May 1, 2011,” in the corridor gallery, paired two LCD monitors. One showed the now iconic image of President Obama and his national security team in the Situation Room, on the night Osama bin Laden was killed, watching something we can’t see. The other was blank, an insinuation that whatever happened from that perspective will never be known.

The fourth gallery (above) is exquisitely installed with a well-curated exhibition by artist Liza Lou. For more than 15 years, Lou has transformed everyday objects into bead-encrusted delights. While the show primarily focuses on her new minimalistic sculptures created in 2010-11, it intelligently weaves in some wall-hung prayer rugs from 2007-08 and the large-scale installation “Trailer” (1998-2000), which sits in the nearby courtyard and lends some historical perspective.

A fifth gallery — 290 feet long and 13 feet wide, with a glass wall — runs parallel to the other four and looks out onto a courtyard. Its awkward shape and the light pouring in through the window will limit its functionality. But Kendall Buster, who was commissioned to create a piece for the museum opening, handled the space well. “New Growth: Stratum Field” (at left), a suspended sculpture, successfully breaks up the linear feeling of the space and embraces the bright sunlight, turning it into reflections that dance and skip along the walls.

The fifth gallery exemplifies my overall impression that the museum is an interesting building but a challenging place to exhibit art in. Sottile has been sensitive in matters of preservation, and his classrooms and public spaces respond well to the needs of the college, but he has left some real physical hurdles for the curators. This is compounded by the dedication of particular galleries to certain collections.

SCAD has the reputation of putting more focus on the commercial arts than the fine arts, an impression that is compounded by the fact that it is not accredited by the National Association of Schools of Art and Design. Laurie Ann Farrell, SCAD’s executive director of exhibitions, and her team fight hard to dispel this notion by bringing in internationally recognized contemporary artists for their exhibitions and the annual deFINE Art celebration. The new museum, however, feels as if the purpose of displaying art has been lost in the conversation and seems to confirm that the fine arts are not the school’s priority.