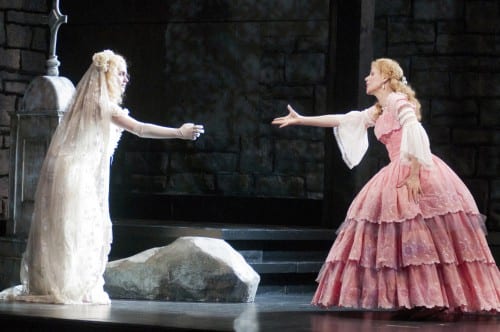 The Atlanta Opera’s “Lucia di Lammermoor” should be seen as a turning point for the company, which continues to transform itself under the leadership of General Director Dennis Hanthorn. I attended the November 15 performance; further performances will take place November 18 and 20. For tickets, click here.

What has changed is the company’s willingness, in a mainstage production, to abandon those musty and “traditional” rental productions in favor of something a bit more complex and even radical. Yes, there have been a few previous hints from the Atlanta Opera as to what the rest of the world was seeing. Last season’s production of “Cosi Fan Tutti,” for example, included World War II costumes, but the set was utterly traditional and this probably would have gone unnoticed were it not for the director’s rather pretentious program insert. And Atlanta has seen experimentation before: in the late 1960s, when “foundation garments” were still worn by society matrons here, a company run by retired soprano Blanche Thebom even included frontal nudity in a production of “La Boheme,” directed by Frank Corsaro, one of the opera world’s best-known directors. Nudity!

But this “Lucia” seems to be the Atlanta Opera’s first example of what is called “Regietheater” — German for “producer’s theater” — in which the director’s entire concept, including geography, era, stage direction and often plot, is superimposed onto the original setting of the opera, for better and worse.

Donizetti’s opera, sung in Italian, is based on Sir Walter Scott’s “The Bride of Lammermoor” and takes place in feudal Scotland. In a twist on “Romeo and Juliet,” the title character is tricked by her brother into believing that her lover, who is his rival, has betrayed her and is forced to marry for her brother’s convenience. The lover arrives at the wedding and mocks her, driving her into madness. She murders her new husband, then launches into a prolonged “mad scene” before the horrified guests.

The opera was directed here by Tomer Zvulan, who managed to direct two different productions of “Lucia” last season, in other cities. At the now-defunct Opera Cleveland, he updated things to the 1930s, with rival families of gangsters. Then, at the Seattle Opera, he moved the melodrama to a nameless European country in the 1830s. Atlanta’s production is a bit of a mash-up, with the unit set from Cleveland and the costumes from Seattle.

Resetting the era and location can do great things in opera, both by removing us from clichés and by suggesting metaphors. The Cleveland staging, with gangsters whose violence would have echoed that of the feudal families in the opera, seems an interesting approach — updating the opera into an era familiar to the audience from movies and television. It’s more difficult to see the rationale for the Victorian setting that we got. Europeans, in the Victorian era, were not divided into violent, warring clans. So there is a major disconnect between what we hear in the text and what we see on the stage.

Jonathan Boyd and Georgia Jarman as the doomed lovers Edgardo and Lucia. (Photos by Tim Wilkerson)

Beyond updating, however, this production is defined by its extensive use of projected images and by the director’s intense, highly choreographed approach to staging. The unit set, a handsome construction suggesting the stone walls and wooden beams of a castle, is surrounded by multiple scrims. These are used to display the text of the original Scott novel during transitions, and to show a reception room, graveyard or whatever scene is called for, often with striking realism. The bridal chamber, where the murder takes place, is usually upstairs and offstage, and Lucia descends a staircase in a bloody gown. Here, giant doors at the rear of the reception chamber open to reveal a grisly murder scene.

Zvulan likes for his singers to push and shove one another, hug, kiss and roll on the floor. (The credits mention a choreographer, Rosa Mercedes, unusual in an opera with no dance scene, but understandable here.) The problem is that Zvulan doesn’t seem to know when to stop. He has inserted a ghost, a mute character that wanders around the stage from time to time. Lucia does sing about the ghost, but this character seems gratuitous. At some point, all the extra stage action and the constantly churning projections become a distraction from Donizetti’s music, which needs to be central, and from the libretto.

The title role is portrayed by Georgia Jarman, a young soprano singing the part for the first time and making her Atlanta Opera debut. It is a demanding role, calling for extravagant and prolonged vocal displays, and Jarman nails it nicely. She has mastered the rapid-fire runs of notes, the trills and the floating high notes that make this role so thrilling all night, not just in the “mad scene.” What detracted from her performance here was not the singing but the acting, and it’s hard to know how much of this was Jarman and how much was part of Zvulan’s conception.

Jarman’s Lucia seemed already insane at the beginning of the opera. She camped her way through the second scene, when she describes her love affair to Alisa, her companion, jumping about and mugging like a schoolgirl as she described intensely dangerous intrigue. The mugging continued, reaching its apex during the mad scene, where Jarman grinned incongruously, constantly rolling her eyes and generally milking it.

Granted, this is not a subtle opera, but it turns on our sympathy for Lucia, who is driven mad first by the perception that her lover has betrayed her, then by the realization that she has betrayed him. For this to happen, we need to see Lucia as a real person, and she needs to experience a transformation as she experiences these events. You have to admire Jarman’s fearlessness, and her ability to sing while jumping about, but her thoroughly unhinged conception of the mad scene would have worked better had she not been overdoing it all evening. It still beats the old “stand and deliver” sopranos, but it does suggest that things aren’t always simple in the new world of hyper-visual opera production.

Presumably to enhance the contrast, everyone else in this production came across as sympathetic, devoid of the usual villainy. Baritone Stephen Powell, making his Atlanta Opera debut (like Jarman, he has sung with the Atlanta Symphony Orchestra), gave a powerful and stage-filling portrayal of Lucia’s brother, Enrico. There is a pleasing resonance to his voice. Lucia’s lover Edgardo is sung by tenor Jonathan Boyd, whose youthful voice seemed forced at times. Bass Arthur Woodley was commanding and dignified in the role of Raimondo, the family’s chaplain.

Music Director Arthur Fagan got off to a rough start, with some coordination issues and a lack of tension, but soon settled in for a fine evening of robust Italian playing, nicely matched to his singers. Instead of the flute that virtually always accompanies Lucia in her mad scene, we get a glass armonica, an instrument invented by Benjamin Franklin that was the rage in Europe at the time of Donizetti and was, according to the Atlanta Opera’s information, originally chosen by the composer for the scene. It has an otherworldly sound that works well in this instance.

This was not a perfect evening. The singing was quite good. The production was arguably flawed. But it was a fascinating, mostly thoughtful production. What it suggests is that the Atlanta Opera is entering an era where the production aspects, the “non-musical elements of the evening,” are more than just a backdrop and are worthy of intelligent discussion. That is significant well beyond the importance of any one opera production. Things are getting more interesting around here.