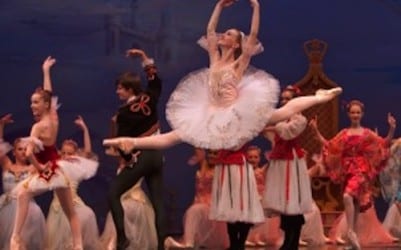 The Sugar Plum Fairy, the epitome of ethereal grace and confidence, has inspired countless ballerinas over the years. Her solo variation in “The Nutcracker” is a quiet, enchanting moment: as a celesta chimes Tchaikovsky’s delicate, precise melody, the charmed hostess’s impossibly light hops en pointe and her generous open arms cast a benevolent spell over the audience. In her glittering tutu and tiara, the ballerina seems to say to every little girl, “Yes, you can become this. It is possible.”

The idea that dreams really can come true lies at the heart of “The Nutcracker” and accounts for its popularity as an American holiday tradition. Loosely based on E.T.A. Hoffmann’s 1816 tale “The Nutcracker and the Mouse King,” the story — told from a child’s point of view and performed largely by children — offers themes that the young (and young at heart) can connect with: sibling rivalry, heroism in the midst of a battle between toy soldiers and mice, and a journey into a magical realm. There, young Clara (Marie, Marya) discovers the beauty and variety that the world has to offer through dance — and a sparkling fairy queen.

The Snowflakes scene in the Atlanta Ballet's production. (Photo by C. McCullers)

“The Nutcracker” tends to attract the largest audiences of the season for most American ballet companies, making this chestnut an economic necessity. It’s necessary, too, to keep the perennial ballet fresh. In recent years, Atlanta Ballet Artistic Director John McFall has made a few subtle changes. This season the choreography has changed little, but a new backdrop will replace Act 2’s familiar castle in the air. Robert Hand, Atlanta Ballet’s lighting director, explains that the new design sprang from the question, “Where would you want to be if you were in the middle of winter?”

The new scene is designed to look as if you’d just walked through Act 1’s Snowflakes scene, gone over a hill and turned around to see the same scene. Miraculously, it is re-awakened with the blooms and flowers of spring. Gone are the muted tones and pastels; the backdrop, partly opaque and partly translucent, is saturated with color. And only the sky lights up, Hand says, in order to create a greater sense of depth and perspective.

Meanwhile, the Gwinnett Ballet Theatre also is sprucing up its version of “The Nutcracker,” as it celebrates the production’s 30th anniversary. The pre-professional company will offer 11 public performances and five outreach shows that will feature new backdrops, sets and costumes. Its new artistic director, Jaime Robtison, promises to bring fresh choreography and insights to her first production as the GBT’s leader.

The GBT Orchestra, conducted by Predrag Gosta, will accompany the dancers for the last eight shows. This is one of the few productions of “The Nutcracker” in metro Atlanta this season that will offer live musical accompaniment. Audience favorites such as magician Bill Kress will return as Herr Drosselmeyer, with live birds and illusions in tow. Local celebrities will perform interchangeably as the comical Mother Ginger, a second-act figure whose huge skirt hides little dancers who come out to perform.

Here is a selected roundup of the many “Nutcracker” performances to choose from in the Atlanta area:

Atlanta Ballet. December 8-24. www.atlantaballet.com
New lighting, a new backdrop for Act 2, and the Georgia Youth Choir will update this lavish production at the Fox Theatre.

Ballethnic. November 17-20. www.ferstcenter.gatech.edu
In its 18th annual production of “The Urban Nutcracker” — Ballethnic’s twist on the holiday tale, set in Atlanta in the 1940s — the company will blend classical ballet with jazz, modern, African and other ethnic dance forms set to Tchaikovsky’s score, along with adapted music by L. Gerard Reid.

Georgia Ballet. December 2-4. www.georgiaballet.org
On December 3, the company will present its fifth annual “Celebrity Nutcracker.” In this special event, community leaders will join the regular cast in a performance to raise money for the YWCA of Northwest Georgia.