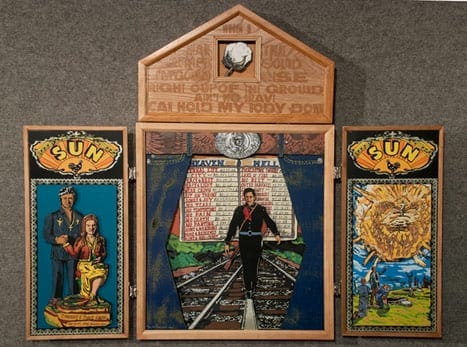 Printmaking occupies a curious position in the hierarchy of modern art. Unless an artist outside the field — Robert Rauschenberg, Frank Stella (whose remarkable prints were shown at the Bascom this summer), Kiki Smith (whose “Rituals” is at the High Museum of Art through January 22) — adopts it as a vehicle, it doesn’t command broad critical attention. Prints seem to be considered more a private delectation, appreciated by connoisseurs of their demanding practices and the images that are their result.

The inaugural Atlanta Print Biennial, organized by the Atlanta Printmakers Studio, doesn’t so much counter that position as celebrate it. The 75 works from three continents attest to the vigor of the artists committed to the medium, who continue to experiment with ways to expand its language and use that language to express their wide-ranging thoughts.

Juror Beth Grabowski, co-author of “Printmaking, A Complete Guide to Materials and Processes,” makes the case by selecting works that represent a spectrum of approaches and techniques. Admirable examples of woodcuts and mezzotints, for example, share Barbara Archer Gallery with a full-scale medieval-style altarpiece (above) and a video of a portrait screen-printed on a sheet of ice (below).

Environmental concerns are recurring subjects here. Some artists apparently decided that you have to laugh to keep from crying. Andrew Kozlowski’s screen print “Standard Disaster” is a landscape in which patches of dry land in a gray sea are protected by orange cones and striped barricades. Jonathan Stewart created a faux commercial product, a bag of breathable air.

These concerns shade into existential dread. Lyons Beauvais expresses it obliquely in his lithograph “Genesis 6:19,” with Noah’s Ark in the background. Douglas Bosley envisions a parched, ruined landscape (at left) illuminated by three mysterious beams in a dense, rich mezzotint, “[k040:04.09.10.02.10.28],” which harks back to 19th-century Romantic painting even as it looks forward to the end of the future.

Redemption, however, does have a voice. At first glance, S.L. Dickey’s multipart altarpiece devoted to Johnny Cash might seem tongue-in-cheek. The drawing style is folksy, and the central panel mimics a stage whose parted curtains are legs of denim jeans. But the song titles, listed under headings of “Heaven” and “Hell,” suggest biblical roots, and Cash’s biography is a story, as Dickey says, of sin, love, struggle and atonement. The right-hand image is an archetypal Resurrection scene.

The video “Deja Vu,” by Eszter Augustine-Sziksz, is a loop in which the sequence depicting the dissolution of the portrait as the ice melts and the ink bleeds into the water is immediately followed by that sequence in reverse, so that we witness the ice stabilizing and the ink coagulating into an image. It can be read metaphorically, as the cycle of life, death and rebirth. You gotta love a show that makes bedfellows out of Johnny Cash and a print on melting ice.

Through December 3. Juror Beth Grabowski, professor and associate chair in the Department of Art at the University of North Carolina, will speak at 2 p.m. Sunday, November 20.