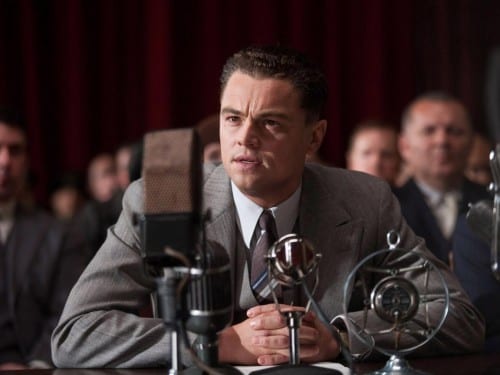 For someone with a small-minded pettiness and a genius for holding grudges, FBI Director J. Edgar Hoover also saw the bigger picture, at least when it came to pioneering forensic methods that put a lot of crooks in jail. With authoritarian zeal, he also authorized wiretaps that prefigured post-9/11 intrusions into privacy and catalogued a whole library of secret files detailing the sexual preferences of stars and politicians — not because those practices threatened national security, but because Hoover’s ownership of the down-low dirt kept him in office, and in power, through eight presidential administrations.

Oh, and in his off time, Hoover may have been sleeping with his handsome second-in-command, Clyde Tolson, and dolling himself up in women’s clothing. Clint Eastwood’s film “J. Edgar” refuses to totally validate, even fictionally, those suspicions. Well, sorta, maybe, a little. Its odd dance of approach and retreat, of confirmation and denial, is what makes the movie a fascinating frustration. Well, I guess any movie trying to nail down an enigmatic slice of jelly like Hoover never stood a chance of being a definitive portrait. That’s the nature of that beast.

Here’s what you want to know: under layers of makeup, Leonardo DiCaprio is reliably good as Hoover. I just wish that, after “Revolutionary Road,” “Blood Diamond,” “Body of Lies,” “Inception” and now this, he would take on movies that were as satisfying to watch as they are prestigious on paper. DiCaprio’s next gambit is playing Jay Gatsby for director Baz Luhrmann (oy!), who’s probably working hard to make that great F. Scott Fitzgerald novel as unwatchable as “Moulin Rouge.”

Like I say, DiCaprio is reliably good. Not great. Not indelible. Not oh my God! That’s partly the fault of the script, by Dustin Lance Black (Oscar winner for “Milk”), partly Eastwood’s (also reliably) craftsmanlike direction. Sorry, but Eastwood isn’t a natural match for material that strays into bohemian, non-heterosexual territory. Exhibit A: his awkward adaptation of “Midnight in the Garden of Good and Evil.” “J. Edgar” is a better movie than that one. That’s partly because Hoover’s life intersected with so many interesting passages of American history, whether he’s investigating the Lindbergh kidnapping (the film’s central plot thread as it hopscotches across decades) or secretly keeping track of Eleanor Roosevelt’s sapphic shenanigans.

The first lady’s proclivities provide a shadowy, mirrored metaphor for Hoover’s own bunkered private life. The movie aims us, in its last moments, toward a bittersweet appreciation of the man’s inner conflicts. But J. Edgar Hoover and “bittersweet” are a mismatch in subject and tone, I think. Here’s this great, whirligig American icon — love him or hate him, he was a real original, a bully, a fabulist, but someone responsible for genuine advances in our criminal justice system. The movie never decides to celebrate or condemn him, for either his excesses or his inhibitions. Watching, it’s hard not to think of the wonderful liberties Tony Kushner took with Roy Cohn in “Angels in America,” turning him into a shining demon who shared some of Hoover’s drives. “J. Edgar” wimps out while pretending not to.

The nature of Hoover’s sexual urges hides in plain sight throughout the movie, but it is weirdly squeamish about going there. When Hoover and Tolson have a spat that winds up with bloodshed and a kiss, viewers at the screening I attended coughed out nervous chuckles. I think that’s because, like the two characters themselves, the movie seems unable to really follow through on its impulses. But come on: if you’re going to make a movie speculating about the private life of J. Edgar Hoover, then speculate already. Instead of “Brokeback Mountain,” we get “Halfbroke Capitol Hill”

In the supporting cast, Judi Dench, as Edgar’s smothering mother (paging Dr. Freud!), is tony wallpaper, except for one Lady Macbeth-lite scene when she fans the ember of self-hatred her son might feel for being turned on by other men. (She refers to gay men as “daffodils,” which, excuse me, is just fabulous.) Underutilized but expert as always, Naomi Watts plays Hoover’s private secretary and keeper of his (and others’) secrets. With a nod or grimace, she’s able to convey decades of world-weary knowledge.

As Clyde Tolson, Armie Hammer (who played the Winklevoss twins in “The Social Network”) has the right himbo glamour for the role, at least as a young man. He’s the sort of walking trophy you imagine Hoover would want at his side, a reproach to the Creator who made him, himself, so bulldog-ugly. Playing the older Tolson, though, Hammer suffers from unconvincing old-age makeup, and he gives a high school-level performance of Playing Old. He nearly wrecks the movie in scenes that call for wistful delicacy.

“J. Edgar” is an interesting movie that seems to feel its way toward what it could have been, if only its makers had agreed on what they were trying to achieve. By the end, we appreciate that Hoover was a damaged soul. But the film can’t quite persuade us to care. After watching “J. Edgar,” you feel hungry for a Ken Burns documentary about the man. Not a good thing.