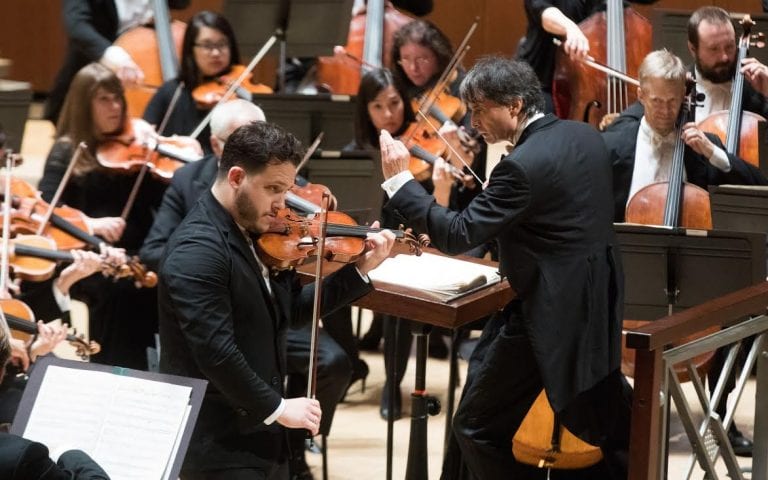 Atlanta Symphony comes up a little flat with takes on Vieuxtemps, Ravel

“An interruption makes us all look silly” was the concluding line of a lightly humorous new video that admonishes the audience to turn off their cell phones, shown immediately before Thursday evening’s concert by the Atlanta Symphony Orchestra. But after the boisterous opening 22 bars of the overture to Benvenuto Cellini by Hector Berlioz, when the music calmed down to quieter ruminations, a mechanical voice from the audience blurted out, “I’m not sure I understand.” Admonishment from the silver screen notwithstanding, the digital exclamation of existential doubt came from the app on a cell phone, still on, in the possession of a young couple in the next row in front of me. They immediately began to snicker.

That annoying faux pas hardly dented the fender of the bold-hearted “Overture,” which began the concert of putatively French music by Berlioz, Vieuxtemps and Ravel, led by guest conductor Jun Märkl, with violinist Giora Schmidt as guest soloist. The program will be repeated tonight (Friday evening) at Kennesaw State University Morgan Hall and then on Saturday night will return to Symphony Hall for a final performance.

The overture to Benvenuto Cellini has enjoyed far more success as a concert piece than Berlioz’ challenging opera semiseria from which it is drawn. It rose up boldly in its curtain-raising character with crashing sonic waves that alternated with more contemplative passages over the course of its 11-minute duration. It came across as a bit roughshod in its frequent energetic peaks of assertiveness, but restraint is hardly the watchword for Berlioz when he takes an unusually large orchestra to its dynamic limits.

In contrast, next came Henri Vieuxtemps’ Violin Concerto No. 5. While the program was promoted under a “Vive la France” umbrella, what immediately comes to mind with Vieuxtemps is Agatha Christie’s fictional detective Hercule Poirot, annoyed and declaring, “No-no-no-no, I am not some French gent. I am some Belgian gent.”

Vieuxtemps was best known as a violinist, a prominent exponent of the Franco-Belgian school of playing. That piece of his legacy is also enshrined in the violin he played, known today as the Vieuxtemps Guarneri del Gesù — a mid-18th-century instrument later used by Yehudi Menuhin, Itzhak Perlman and Pinchas Zukerman and now under lifetime loan to American violinist Anne Akiko Meyers.

It stands to good reason that the majority of Vieuxtemps’ compositions were intended for himself to play, including the seven violin concertos for which he is best known. But however famed Vieuxtemps might have been as a violinist, he is a relatively minor name in the world of composition, as demonstrated by his Violin Concerto No. 5, performed this evening by American-Israeli violinist Giora Schmidt.

Schmidt’s playing is quite likable, but this particular brief concerto seemed not a great choice as platform for his ASO debut, despite its origins as a violinist’s showpiece. It’s just not that great of a work and came across as somewhat flat, especially after the overtly pumped-up, barn-burning Berlioz. A more viable choice, even if it meant dropping the “Vive la France” umbrella, would have been to substitute another, more engaging vehicle for Schmidt’s playing, such as Samuel Barber’s Violin Concerto, which Schmidt has performed rather successfully with the Israel Philharmonic. Then drop the Berlioz for a shorter, perhaps less bombastic, opener of decidedly French character, so that the program’s first half would not feel truncated.

The complete score to Maurice Ravel’s ballet Daphnis et Chloé had not been played by the ASO for 10 years, since Robert Spano led the nearly hour-long work in 2008. Heard in concert, sans choreography, it’s fabulously cinematic in scope, broad in its coloristic palette, allowing a lot of opportunity for individual musicians and sections to be featured — too many to spell out here by name.

This performance under Märkl was dynamically well-shaded, top to bottom, but felt not quite as refined and subtle in its coloration as this orchestra is demonstrably capable — ovation-worthy, but just a tad shy of a certain final sheen that says “this is French” without having to use words.