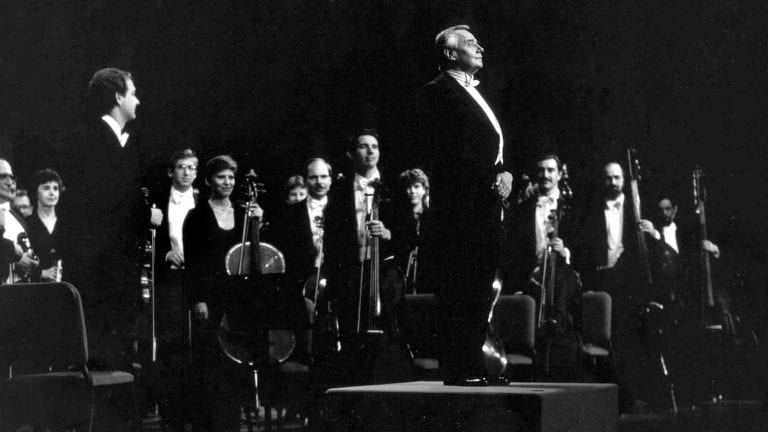 Under Robert Shaw, the ASO released landmark recordings that have now been rereleased on vinyl. (Photo courtesy Atlanta Symphony Orchestra)

Two historic Atlanta Symphony Orchestra recordings have recently been rereleased on high-grade vinyl. Craft Recordings, part of the company that now owns the Telarc Records catalog, released five of its all-time top hit records as vinyl LPs for the first time in 35 years, and these include two historic Robert Shaw recordings: a 1978 all-Russian album featuring Stravinsky’s The Firebird Suite, and a 1981 two-record set that includes Orff’s Carmina Burana.

Though the market for these recordings is limited — audiophiles with turntables — their release is an opportunity to explore what the fuss was all about when, four decades ago, the ASO was introducing itself to a national and international audience.

John White, an ASO board member, is the orchestra’s resident recording expert and historian, able to recite an astonishing amount of technical data and sales numbers from memory, not unlike a baseball fan who knows his player stats. According to White, “when Shaw came to Atlanta in 1967, he had a long history of recording, and the expectation was that the orchestra would quickly go into recording.” In fact, it took quite a while. Over the next decade the Atlanta Symphony Orchestra did record a Christmas album (with the chorus) and, in 1977, a performance of Tchaikovsky’s Nutcracker Suite and Romeo and Juliet. These did not achieve wide distribution.

Things changed rapidly once Telarc was brought in. This new company had been organized by two classically trained musicians and audio experts in Cleveland, Jack Renner and Robert Woods. Woods had sung in the Cleveland Orchestra Chorus, which Shaw led before coming to Atlanta. John Cooledge, a noted Atlanta audiophile and an ASO board member, was aware of Telarc’s emerging reputation and advocated for the collaboration, which began in 1977.

It was a stroke of genius, as Telarc quickly became a leader in the industry, known for excellence and technical innovation. Over the next 32 years, Telarc documented the orchestra’s greatest achievements with recordings that achieved blockbuster success in the classical music world and received 28 Grammys. Many of the earliest recordings continue to sell, cherished by fans and critically ranked among the best-ever for a particular work.

Telarc was an audiophile company, lavishing attention on the recording process and bringing together the most innovative engineers and the most advanced equipment. In 1978, the company was ready to introduce digital techniques, which resulted in new clarity, accuracy and dynamic range.

That year saw the release of the first ASO/Telarc recording: an all-Russian program featuring Stravinsky’s highly popular The Firebird Suite from the ballet, and the “Polovetsian Dances” from Borodin’s opera, Prince Igor. While the chorus appeared in Borodin’s work, it’s important to note that the orchestra and Shaw were laying down an important marker: We can hold our own with “nonchoral” works.

I discussed this recording with Lois Reitzes, WABE host and producer, and Shaw’s good friend. “Shaw was underrated as an orchestral conductor,” she said. “But the phrasing and dynamics in the Firebird reveal that he was very fine. In the Borodin, his tempi were ideal, and there’s that amazing lightness of ensemble in the chorus. It can’t be beat for excitement.”

But the recording was historic for another reason: according to White, the Firebird album was “the first commercial digital orchestra recording.” For the first time, high-end digital equipment captured and preserved the sound of an orchestra right up to the point that the analog plate was cut, and the vinyl records were then pressed by a German consortium known as the industry’s best. 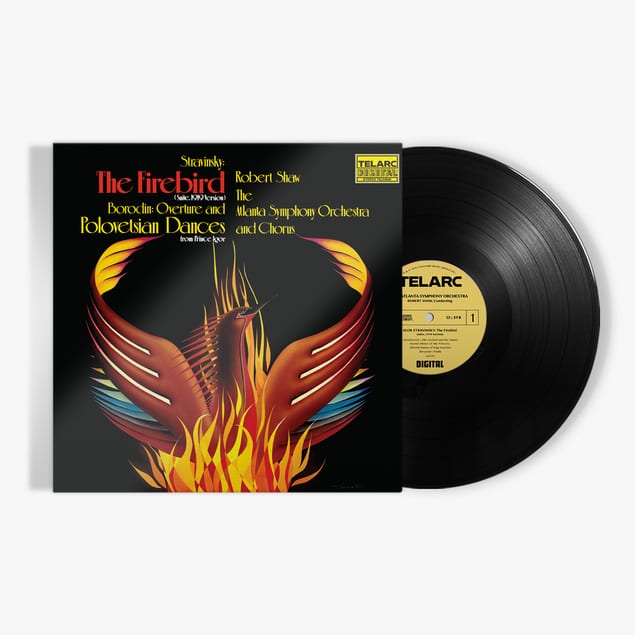 The combination of a superb performance and the revolutionary technique took the classical record world by storm. The superiority of the process was immediately apparent to even the most unsophisticated listener. White cited the example of the bass drum, which here resonated with vastly more power and clarity than on any previous classical recording. “It was,” he said, “the drum ‘thwack’ heard round the world.” Later reissued as a compact disc, the recording went on to become the ASO’s second bestselling recording of all time. In 2005, when Telarc was sold to the Concord group, the Firebird recording had sold over 220,000 copies, and it has continued to be popular since that time.

I listened to the new release on 180-gram vinyl several times on borrowed equipment (I no longer have a turntable) and was impressed with the natural sound of the orchestra. Of course, there is no shortage of great Firebird recordings, but this one holds its own and has a nice raw, sensuous feel that seems very Russian. And the “Polovetsian Dances” work especially well, thanks in no small part to the chorus.

I also listened to the compact disc version, released later. The difference is rather subtle, but it’s definitely there. I agree with the audiophiles that overall the vinyl sound is warmer than that of the CD. The vinyl advantage is more evident in Firebird than in “Polovetsian Dances” and is definitely less distinct in the choral passages of the Borodin work than with the orchestra. One of the distinctions of vinyl is that it offers more sonic range, preserving high overtones that can extend well beyond the hearing range of most listeners.

The Orff/Hindemith recording stands as the Atlanta Symphony Orchestra’s most popular recording ever. Some of this might owe to timing. The popularity of Carmina Burana was surging in 1982, and Shaw’s recording both benefited from and fed into this trend. It is, of course, a unique work, with more than a touch of scandal, not necessarily a bad thing if you’re trying to sell records. Styled as a cantata, it’s based on a book of “profane songs” found in a monastery, and the texts are bawdy, referring to drinking, gambling and sex. Orff’s score is a masterful evocation of this debauchery. Lawrence E. Johnson, reviewing another Carmina recording in the New York Times, described it as “a fast ride in a monastic sex machine,” and Shaw’s treatment is similarly exciting. 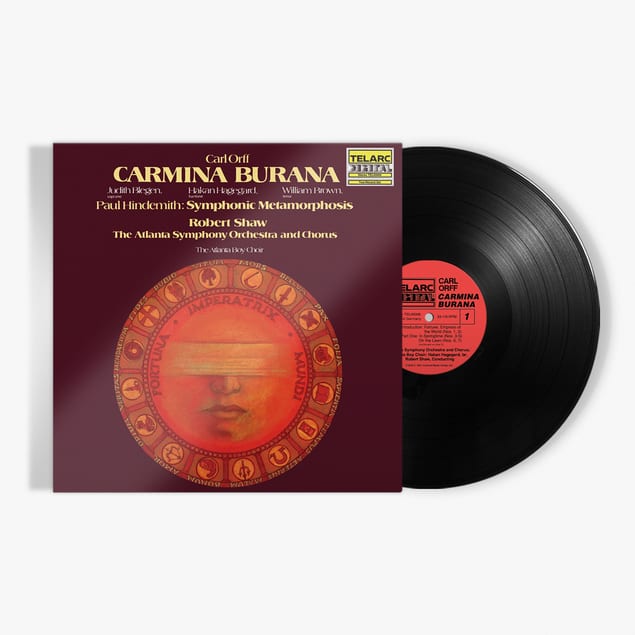 The ASO’s Carmina recording featured baritone Hakan Hagegard, with incredible diction, along with soprano Judith Blegen. William Brown is superb in the notoriously high tenor part, using falsetto. The Atlanta Boy Choir also participated, but the great strength of the recording is the ASO Chorus, already showcasing the unique clarity and tonal perfection that are its trademarks.

Reitzes recalled the intensity of Shaw’s preparation. “Through the Goethe-Institut, he was able to have a conversation with Orff,” she said. Shaw spoke with Orff at some length, and “part of what comes through in this very visceral sort of music is his attention to the dialect. He went over the words, the pronunciation, and every kind of detail he could possibly get from the composer. And I think the results are just marvelous.” That acute focus is telling. The songs are written in medieval Latin and German, so these choices would not have been self-evident. Shaw’s reputation was such that the precise pronunciations he used would inevitably influence future performances everywhere.

I loved this recording, and it’s easy to see how it has managed to do so well. That said, perhaps the most interesting competition comes from the ASO’s 2002 recording under Donald Runnicles, currently out of print. It benefits, of course, from the remarkably consistent sound of the ASO Chorus, but at this point the orchestra’s sound had become more precise and virtuosic. Indeed, one of the virtues of these classic ASO recordings is that they allow the listener to hear the evolution of the orchestra over the decades.

Shaw had a special relationship with Hindemith and had commissioned his “When Lilacs Last in the Dooryard Bloom’d,” a big, complex choral work, back in 1945 when he was leading the Collegiate Chorale. That was one year after the premiere of Symphonic Metamorphosis of Themes by Carl Maria von Weber, the second disc in the Carmina set. It’s witty, with an electric energy and, at times, the feel of a dance work.

By 2005, Carmina had racked up 330,000 sales (all formats combined) and has continued as a bestseller to this day. Over half of the total sales numbers have come from the overseas market, making it a true international bestseller.