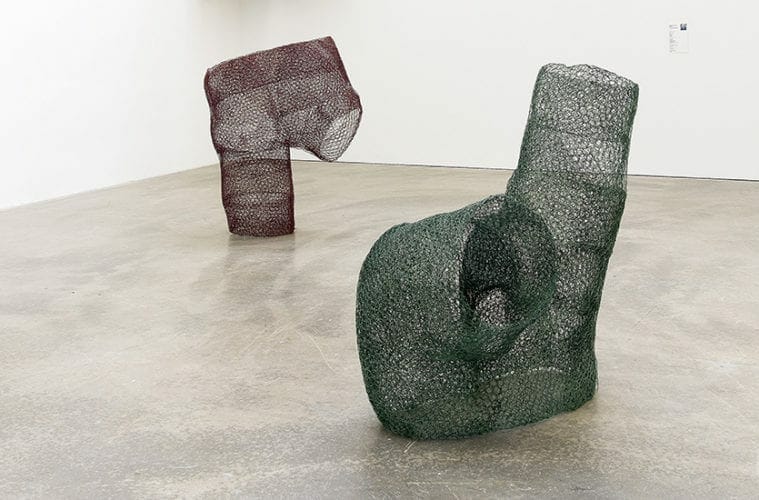 Review: Atlanta Contemporary’s “She Is Here” resonates with power, resilience

“When I’m sometimes asked when will there be enough [women on the Supreme Court] and I say, ‘When there are nine,’ people are shocked. But there’d been nine men, and nobody’s ever raised a question about that.”

The exhibition She Is Here at the Atlanta Contemporary Art Center (through January 31) summons Ginsburg’s vision by showing the work of 20 women, all of whom had a studio at the Contemporary between 2001 and 2020. The show could easily have been titled “She Persisted,” as so many of these artists have worked in their studios for decades.

There is an incredible strength to this exhibition, curated by Kristen V. Cahill of The Lola womxn’s club and Daricia Mia DeMarr, cofounder of Black Women in Visual Art. One is immediately struck by the individuality and personal nature of the works. As the Guerrilla Girls said so many decades ago in “The Advantages of Being a Woman Artist,” these artists have been “working without the pressure of success.” This lack of recognition is a not good, but it has allowed these artists to develop vocabularies that are distinctly personal and authentic. Everything in this exhibition possesses a power, integrity and uniqueness that is rare today when much art “looks like art” without actually being so.

Inside the gallery, viewers are greeted by Two Hearts (2020), a sculptural site work by InKyoung Chun of yellow and pink neon tubes arched to create a double heart in front of a gallery window that looks out on a tree and greenery in the courtyard. Two arcs of fresh flowers echo the neon, creating a kind of double rainbow. There is play in this work, between inside and outside, and between yellow and pink neon and the natural color of the flowers as they dry and fade (but are then replaced). This piece was originally made for the artist’s front yard to honor hospital workers who’ve put their lives on the line during Covid-19. Chun’s sculptural open heart is triumphant and so hopeful in this difficult time. InKyoung Chun’s “Two Hearts,” which uses yellow and pink neon tubes, began as a tribute to hospital workers at risk during the Covid-19 pandemic.

MaDora Frey has created a site work that’s symbiotic with the gallery’s architecture. Venus’ Looking Glass (2020), is an intensely hued homage to the seminal land artist Robert Smithson (1938–1973). Frey’s work brings a new twist to Smithson’s legacy by adding intense color to the mix. Her pile of granite rocks piled inside and outside the gallery set among magenta and yellow films, mirrors and tubular lights creates a new space and viewpoint. The tubular lights become white lines in this dimensional space. The vertical mirrors set into the window frame refract and compose the light that radiates from the work. As the light from outside changes, each elements of the work is visually active. Frey transforms materials associated with the male-dominated land-art movement of the last century through a play of light and color that creates a richly meditative work.

Celia Kane’s How Am I Feeling Today (2009–2020) is composed of 89 mixed-media self-portraits on handkerchiefs. Kane began this work in 2009 by photographing herself in the mirror daily after asking herself about her state of mind. She wrote her answer on her forehead in lipstick and then snapped a photo. Kane laser-printed each photo onto 89 vintage family handkerchiefs from her mother that Kane wore in the breast pocket of her Catholic-grammar-school uniform. She added elements of embroidery, paint and collage to make mixed-media self-portraits that are intimately revelatory of her psyche.

Kane spent 10 years beading and embroidering these works. She stopped at 89 — the age to which her mother lived — to be hung together. How Am I Feeling Today is very much in tune with these pandemic times when we all are experiencing personal struggles yet have time for reflection.

Teresa Bramlette Reeves’ works here are intimate watercolors on paper of an aging female nude (herself?) in various situation — atop a pile of poop, in the bath, in a teacup, and several of a single cat and one of ET. These watercolors are liquid ruminations on her current world.

The sensuous quality of the aqueous paint recalls Rodin’s watercolors of the female figure. Bramlette displays a sense of humor as she deals with the difficulties of the past year and processes the death of a colleague. She identifies with Lewis Carroll’s Alice in her not so wonderful “Wonderland.” The titles tell us exactly what rabbit hole she’s fallen into: Pile of Shit, Clean Enough, Down the Hole and so on. “As Alice puts it,” Bramlette says, quoting Carroll, “How puzzling all these changes are!’” An appropriate message for this difficult moment. Shara Hughes’ “Peep” is a beautifully twisted version of the eye in the sky.

Shara Hughes has loaned the exhibition a work from her personal collection titled Bad Mood Rising (2018). This riotous landscape is composed of two trees whose leaves are dabs and dots of paint in front of a stained-blue lake. It’s impossible not to enjoy the pun on the Creedence Clearwater Revival song “Bad Moon Rising” when so many have messed with the lyrics or heard them incorrectly.

What makes Hughes such an interesting artist is how she subverts her subject matter and the history of painting at the same time with a good dose of pop culture. The small work Peep (2020) is a landscape in yellow, red and orange where the sun or eyeball is setting over the land/water. Hughes has subverted Redon’s celestial eyeballs with a beautifully twisted version of the eye in the sky.

Sculptor Ann Rowles has championed women artists since she arrived in Atlanta in 1995. Her truncated body parts in painted chicken wire (1990) float around the gallery space. They have an openness and lightness in their materiality, with a critical nod to both the objectification of women’s bodies and the ways women themselves can be obsessed with their bodies.

This exhibition is filled with superstars from the Atlanta art community, with Lillian Blades, Sheila Pree Bright, Jaime Bull, Sarah Emerson, Jill Frank, Jane Foley, Nikita Gale, Sonya Yong James, Pam Longobardi, Kelly Taylor Mitchell, Jenene Nagy, Hannah Tarr, Dana Thacker and Christina A. West among the 20 artists that represent the tip of the iceberg of Atlanta women artists. Contemporary executive director Veronica Kessenich, says it best, “She Is Here for reflection. She Is Here for peace. She Is Here for us.”