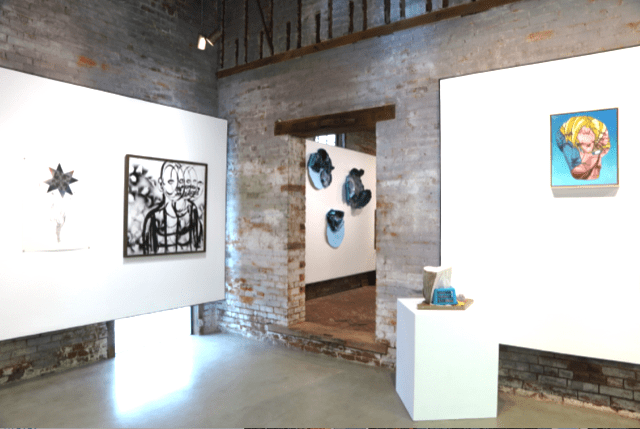 German philosopher Martin Heidegger used strikethroughs in a word to indicate that it was “inadequate but necessary” — that the word was misleading, but there was no better way to approach the problem. That’s the same reason a show originally titled Parallels has evolved into a similar yet different exhibition called Parallel  at Whitespace/Whitespec/Shedspace through September 5. It evolved in multiple times and ways after being inspired by an episode of NPR’s This American Life about a phone app based on the quantum theory that every either/or choice generates an alternate universe in which the opposite option happens.

(The Whitespace galleries are open by appointment on Wednesday–Thursday and 11 a.m.–5 p.m. Friday–Saturday.)

When announced in May, Parallels was to be curator Teresa Bramlette Reeves’ exploration of the alternate world created by Covid-19 shutdowns using the “multiverse” theory. “A previous sense that many shared about the surreal nature of our existence has morphed into a more urgent, disruptive and anxious time,” she said in her curatorial statement. This version of an alternate reality, for which artwork had been chosen, was promptly replaced by another one. The widespread demonstrations following the murder of George Floyd led Bramlette Reeves to realize that parallel social and political universes occupy the same physical space and always have. A sound installation by Atlanta artist Madeline Pieschel, using audio from Atlanta protests in May and June, replicates the events that led to Parallel, a remarkable documentation of immediate history in a work of art.

Bramlette Reeves reveals the gulf between different realities and our imperfect perceptions of them by beginning the exhibition with two parallel sheets of J.B. Murray’s “spirit writing,” messages in an alien alphabet that the rural African American visionary (1908–1988) interpreted by viewing them through a glass of water. The script was unintelligible to outsiders and suggested an entire world to which they did not belong. Murray, who was born in Glascock County, about 135 miles east of Atlanta, also used it to challenge their understanding.

There is a world of difference between this self-contained universe and the public universe that shares the same gallery wall. Jessica Wohl’s 2016 White America consists of a quilted image of an upside-down, ghostly white American flag covered with an admonition rendered in large letters: “Shut Up and Listen.” “L’Edge of réalité” by Wihro Kim, acrylic and plaster on canvas over panel measuring 18 by 24 inches.

The similar whiteness of Sonya Yong James’ textile sculptures — described as studies for Spirit Is a Bone and Biplicity — possesses another connotation. It’s never mentioned, but it’s hard not to think of Herman Melville’s famous recitation of the contradictory meanings of the color white in “The Whiteness of the Whale” chapter of Moby-Dick. Americans have lived, since the nation’s beginning, in parallel worlds in which the varying meanings of whiteness hive off into independent universes of discourse, “multiverses” unnervingly parallel to the model given by quantum physics. Yanique Norman’s Multiverse Suites: Blue Suppurations are the exhibition’s most explicit exploration of this. They deal with what she describes as “the Black psychological body” on a number of levels — although Maryam Palizgir’s wall-mounted Folded Mystery sculpture reveals how the angle of physical perception shapes personal reality.

In everyday reality (or realities), parallel worlds are described by psychology and sociology rather than physics or metaphysics. This is harshly suggested by Juan Logan’s Still Waiting (2014), which lists the names and dates of death of such African Americans as Eric Garner, the New Yorker who died from a police chokehold in July 2014. The piece sits on a wall directly opposite one holding Wihro Kim’s L’Edge of réalité, a painting of a door or window opening onto an indefinite vista. The title is neither English nor French (or both) and hangs on a wall that isn’t parallel to Logan’s or visible from it. Kim’s artwork represents a cultural and metaphysical uncertainty that shares nothing with Logan’s, although they do share a sense of incompletion. The physical gulf of the gallery space symbolizes this fundamental difference.

Bramlette Reeves has consciously arranged the exhibition to reflect the interplay of social and personal worlds. Most of the pieces from Parallels reflect the multiple ways in which personal identity is shaped by inner experience and outer expectations. This is the topic, in different iterations, of work by Tim Flowers, Melissa Huang, Kourtney Stone, Kirstie Tepper and Johnathan Welsh.

In their own styles and sets of assumptions, they argue that our reality is always partial, based on different experiences and interpretations. Thus, the partial faces in Welsh’s Janus series have a different meaning from the ones in Huang’s works or in Stone’s When Grandpa Lived With Us, Recollection 3, or Flowers’ paintings based on foil masks. Tepper’s collaborative works with her two children during the quarantine present a perspective on the pandemic and the personal that no one else here offers. The artists’ statements regarding the new works by African American artists in Parallel reveal depths of interpretation. One example is Shanequa Gay’s figure with the North Star quilt pattern as a head, and the eyes of George Floyd, Breonna Taylor and Rayshard Brooks as images within it. William Downs’ quarantine drawings, titled The Workers and Not Stuck in the Briar Patch, are as cleverly elusive as the allusion to Br’er Rabbit implies.

Zipporah Camille Thompson’s sculptures, which employ visual references to African diaspora spiritual practices, are juxtaposed with a work by self-taught artist George Kornegay. This illustrates how parts of African Americans’ personal identity might come from traditions unknown to America’s other ethnicities (although there are parallels, as in Guadalupe Navarro’s adaptation of milagro votive figures from Catholicism for his Essential, Non-Essential portrayal of contemporary objects from hoodies and sneakers to microwaves and disposable razors.

In her Swimming Pools for All series, Diane Hiscox paints identical rows of suburban houses, implying the reality of a society that denies difference even as it reinforces it. The anomalously gigantic chairs of Jessica Scott–Felder’s The High Chairs (2013) may imply a similar combination of distorted perception and unconscious exclusion.

Judy Rushin’s hazmat suits represent work done under the name of an alter ego from the future, putting her in the company of Fernando Pessoa (1888–1935) and others who created an entire alternate personality with its own history and body of work. This allusion to a world rendered fundamentally threatening by climate change also applies, of course, to our era of (climate–related?) pandemics.

Dave Armistead’s Delay of Game is considerably less apocalyptic, though its presentation of the reduction of sports to physically distanced, individualized audience experiences shares the strategy of using humor to explore the dark implications of our present circumstances. Its placement in the isolation of the Shedspace garden shed suggests an empty stadium, and provides an appropriate symbolic conclusion to a provocatively ambitious exhibition.