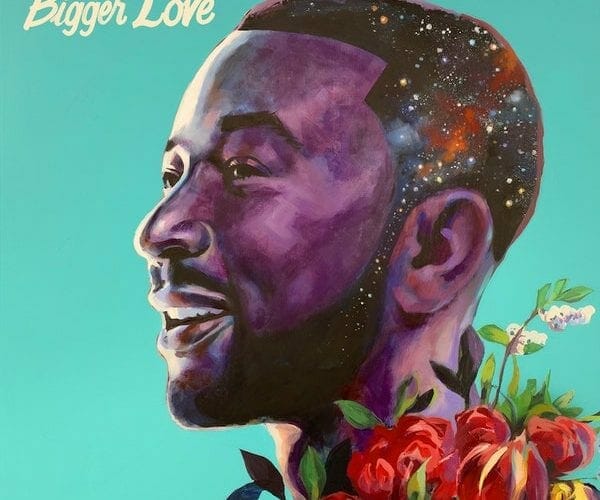 “I’m an extremist when it comes to the love of Black people,” says Atlanta artist Charly Palmer.

Palmer, 60, has been painting, illustrating and designing for more than 30 years. Recent projects include the cover of singer-songwriter John Legend’s Bigger Love album and the July 6–13 “America Must Change” cover of Time magazine. The double issue of Time includes essays on the “frustrations, hopes and experiences of marginalized communities” amid claims of national equality. In addition to the cover art, titled In Her Eyes, Palmer has four images inside the magazine: Baldwin Blooms, Behind His Eyes (third image from top at link), Eminent Domain and Remember George Stinney. In South Carolina in 1944, 14–year–old Stinney — convicted of killing two white girls — became the youngest person ever executed in the United States; his conviction was later vacated. Palmer first painted Stinney some 15 years ago and keeps a picture of the boy in his studio. It still moves him to tears and action.

Palmer isn’t about the attention. He wants to paint pictures and mentor young Black artists. He and his partner/fiancée, the sociologist and writer Karida Brown, spend part of every morning ensuring that whatever they do that day must “fit within the framework of advancing Black people.”

Palmer spoke with ArtsATL about the Time cover, ancestors, the next generation and a mother’s love.

ArtsATL: What was the process like once you got the call from Time?

Charly Palmer: Time’s creative/art director D.W. Pine reached out to me. He’d been at The Atlanta Journal–Constitution many years before Time and was familiar with my work. This particular magazine issue was centered on many writers discussing race. He knew I’d been painting on this subject for at least 20 years and believed my work could reflect that subject as well. I had a range of ideas and submitted eight very different concepts, very rough sketches. The piece on the cover was going to be a Black woman. In our conversations, Pine went back to my concern for Black children. So the focus changed. I went back to the beautiful daughter of a dear friend, photographer/videographer Melissa Alexander, aka Phyllis.Iller. Her daughter’s likeness has been used in at least 10 of my paintings. I did two options, one a three–quarters view and the profile view, which was selected. ArtsATL: What did you think about as you approached the canvas?

Palmer: As a Black man born in 1960, I’ve had many times of being fearful of my life and my family’s life. Now in 2020, I’m worried that my grandkids are still afraid. Why should Black children be afraid that they’re going to be harmed because they’re Black? That was the whole point of the Time cover. The idea is that we shouldn’t still be afraid, yet we are. Justifiably so.

ArtsATL:  What inspired you as you created In Her Eyes?

Palmer: I always name my paintings after they’re completed. In Her Eyes is about what’s in our babies’ eyes right now. What are they thinking about? What are they afraid of? Our Black children are brilliant. Listen to them because you will learn life through their words, through their observations and through their innocence. We’re trying to be strong and confident, but so much has been taken from us. Sometimes, there’s vulnerability in our feelings.

ArtsATL: What’s your take on the inverted American flag on the Time cover and in much of your previous work?

Palmer: We know history. We as human beings, as Black Americans, are American. It’s our right to speak freely. Too often we’re given a message that we are merely visitors in our own country. Years ago I created my Silent Series, which included Stand Up imagery of Colin Kaepernick. Especially now the 45th president and so much else in this country is “anti” — anti-American, antisocial, anti-military and even anti-flag. My version of the Stars and Stripes is we will not be silent. ArtsATL: Why the shift from painting Black life’s struggles to its beauty and strength?

Palmer: I started thinking my work was preaching to the choir about the struggles. We’ve lived them and are living them. Why don’t we start focusing on how beautiful, intelligent and amazing we are? Black people are universal.

ArtsATL: What do you mean by being an “extremist” when it comes to Black love?

Palmer: Black folks have been victimized, imprisoned, killed because of the color of our skin. There are whites who don’t like Blacks, so why are we continually trying to get them to accept, embrace or understand us? Look, I love Black people so much that my time and energy will always be spent loving on Black people. Hate is energy. I found out that there was a right-wing organization that exists to defame and provide misinformation on some Blacks who gain notoriety. Shortly after the Time cover came out, I was included. They made false claims . . . all under the guise of Black women. Crazy, right?

ArtsATL: What’s your message to the next generation of Black artists?

Palmer: The things we’re experiencing in this country now and what’s been happening, is not new. It’s their job to recognize their gift and say, “God, thank you for life. I’m going to give it back and I have a responsibility.” And I use the term God loosely. It’s important to acknowledge and recognize your ancestors. That’s where the passing it forward comes in. Our rewards are for somebody else’s success. Recently I’ve run into people who are now being mentored by somebody I’ve mentored. Follow the instructions of the ancestors and you will see greatness happen.

ArtsATL: What would we see if a painting was based on your life?

Palmer: A beautiful light blue. (Laughs). That’s it. Me, in person, there’s a million things going on at any given time in my mind. A painting of me would be serene and quiet. The title? Blue, of course.

ArtsATL: What’s the connection between your mother, Irma Walker, and your signature of colorful flowers?

Palmer: All I am I owe to her. I have five siblings. Whatever we wanted to accomplish, she’d find a way to support us. She passed away before President Obama’s inauguration, but she saw him get elected. For about a year, I continued to produce, but there was no emotion, no truth behind what I was doing. Then I created a piece Not Enough Flowers. It’s a little boy holding a huge bouquet of flowers. Afterward, I realized the little boy was me. In mourning the loss of my “She–ro,” I started painting again. The flowers are all the things Black women are. There’s nothing stronger, more powerful, more resilient or more creative than a Black woman. It’s not all about me. I’ve been drawing since I was 4 years old. My mom worked in City Hall in Milwaukee. She’d bring me typing paper and I’d fill it up. There’s nothing else I could imagine myself ever doing regardless if I’d make money doing it or not. She was my biggest fan. I’m part of her. Now, my mama is in Time magazine!”