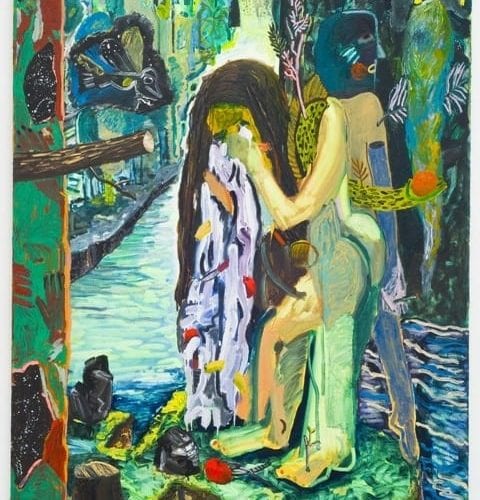 There is something manic about the exuberant profusion of colors, images, allusions and textures in Shara Hughes’ exhibition of paintings Guess You Had to Be There, on view at MOCA GA through June 28. They are teeming with life, as delightful to the eye as they are overwhelming.

But the semblance of innocence in these works — the nonchalance of the titles, the riot of colors, bits of children’s art, a spontaneous assortment of heterogeneous stuff — only partially camouflages the intensity and depth of the artist’s psychological explorations. The tension that results from this disjunction creates elusive, multidimensional paintings with an anxious edge.

Hughes, an Atlanta native and the third and final artist to exhibit as part of this year’s Working Artist Project, transports the viewer to the realm of dreams and fairy tales through a lyrical evocation of archetypal images that seem to twist and transmute before our eyes. In Green Monster, human forms are merged with trees, and trees sprout from a figure’s feet. Snakes become arms; a bird mask stands as a face; the artist’s tools — parts of machines and bits of fruit — are strewn unpredictably throughout the imaginative landscape.

Looking at this work calls to mind the idea that the human body is home to myriad, alien organisms, and that our life depends on them. These paintings likewise depict a human consciousness shot through with “spirits” — imaginative remnants that are important to our experience of self, regardless of whether we are aware of them or can make sense of them. The interior that Hughes calls forth spills out of its boundaries and incorporates everything in its wake. Hughes incites the viewers’ imagination as well, and her strange dreams become our strange dreams. The Juggler, for example, suggests a self that is subject to strange visitations. A serpentine tree spirit rushes toward the face of a vulnerable figure whose skeleton seems to be on view. Eyes watch and an uplifted finger seems to proclaim something. A veiled bird figure emerges from a foot. Limbs sprout flowers. A roll of tape and scissors may indicate a healing process — or does this image just indicate an attempt to hold it together?

Certain images and marks recur across this body of work, creating continuity in this multiplicity. Birds, trees, sprouts, masks and serpentine interconnections recur in various combinations, inviting Jungian analysis. Likewise, visual motifs — the use of a kind of “running stitch” mark along the limbs and trunks of trees, dots and cross-hatching — are fundamental to Hughes’ vocabulary.

Many of Hughes’s works explore relationships that seem to be a perfect medium for the proliferation of dissociated archetypal fragments. Mr. and Mrs. Bright Side, neither of whom seems very sunny, are attended by a bowl of unhappy fish, a scattering of peanuts and one of those magnetic toys for executives. A bolt of lightning, no doubt invited by the couple’s determination to maintain a cheery facade, rends the scene in two.

Hughes’ relationships with the artists she references are doubtless as complex and fertile as the other relationships she explores, and she does not resist their influence on the flow of her imagination. Visual tropes from other artists have accrued to her imaginative repertoire (and to the viewer’s), surfacing from her psyche much as the bird, the snake and the tree. This mesmerizing pastiche of images is echoed in Hughes’ enthusiasm for textures. Sections of dense impasto are created with paint that seems to be squeezed straight from the tube and combined in Hurricane Hughes with flat surfaces of enamel, a blistered streak, finger painting and a whole range of brush techniques. A book (of the artist’s sketches?) tossed in the left corner of the painting is rendered in a relatively realistic style that confers significance to this image. A gale of creative force, expressed through a cacophony of marks, blasts through preliminary sketches.

The relative simplicity of Many Moons, the last work Hughes created for the exhibit, offers a contemplative refuge from the storm of apparitions that inhabit the other pieces in the show, a peaceful resolution to a night of crazy dreams.

If Jung is correct, visual artists like Hughes who speak from the collective unconscious can provide a vision that compensates for the one-sidedness of their culture. In a monochromatic world gripped by multiple forms of gridlock, Hughes’s vibrant, dynamic paintings remind us that other lives are possible, taking place within us and all around us.