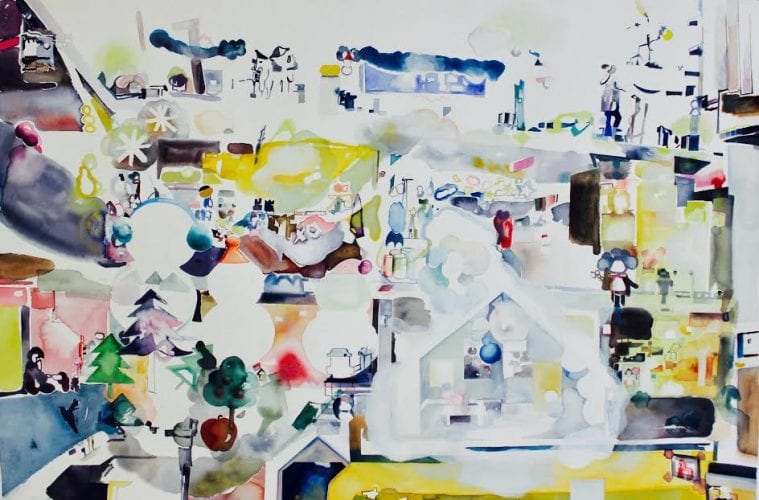 In Kyoung Choi Chun’s Come to My House, at Poem 88 through October 21, suggests the appeal of the everyday. The home, in particular, is an ongoing theme for Chun, whose third exhibition at Poem 88 delivers her familiar world of primary colors and basic shapes in a variety of media, fluctuating between recognizable imagery and geometric form.

The exhibition opens with Red Dot #7 (2016), a watercolor that shows three small replicas of earlier paintings by Chun on a blank background. A tiny red dot adjacent to the center image gives the work sudden, reflexive context, suggesting the language of the art gallery: clean white walls and red dots to indicate that a work is sold. It’s a kind of meta image that introduces recurrent device in the exhibition: architectural space and framed art-within-art imagery. Two Popsicles in NYC (2017), a vertical watercolor that shows a pair of red, white and blue popsicles, fuzzy around the edges to suggest their transient, melting form. They are encapsulated in a narrow arc of white with a gold outline in front of a cityscape. Starbursts of pattern and grids of windows pop against the nighttime sky — a stand out in the exhibition due to its inky blue-black palette. In the background, the Empire State Building glows, its top illuminated in the same all-American scheme as the icy desserts in the immediate foreground. In the bottom right corner of Two Popsicles in NYC, a tiny red-roofed house, simple and childlike, acts as a reminder of home. Its curved doorway echoes the silhouette of the popsicles and the arc motif framing them. It’s a recurrent motif in Chun’s body of work, suggesting the interior and private space of home as warm and ideal.

Food is the subject of two paintings with the same topic, a plate of salad, albeit in different ways that seem relevant to her chosen materials. Greek Salad 2 (2017) is a square oil painting cropped so that the dish’s curving edge creates an arc at the top of the composition. A large white square represents a chunky block of feta on a mound of vegetables; translucent citron yellow suggests drizzled olive oil. Nestled in the center is a detail that seems to break Chun’s observational rigor, a tiny white star, whose presence suggests the interpretive and free-form potential of Chun’s larger watercolors.

Greek Salad 4 (2017) seems to expand upon the conceits in Greek Salad 2. The plate appears parallel to a plane, mid-air against a field of blue that suggests the sea and sky. Within the pile of roughage, Chun incorporates unexpected details to enliven the surface and subject. A tiny dog stands on an olive. An airplane and whole tomato float in miniature around the block of cheese. Glasses with tilting straws grow out from the dish’s side. Both the oil and watercolor capture the sensuality of their subject in distinctive ways. The oil is fluid and thick, while the watercolor is loose and washy, showcasing the aqueous nature of the medium.

In the Western tradition of still life, images of food can suggest gluttonous excess, act as reminders of mortality or embody the transience of sensual experience. Chun’s images seem most related to the latter, albeit with a buoyant optimism that divorces them from that long tradition. Instead, the process of abstraction and activated doodle-like motifs is transformative, suggesting inner life. According to Chun, one of her aims as an artist is to communicate ki, an unseeable and regenerative power within everything.

The Come to My House series, which shares the exhibition’s title, consists of 11 house-shaped plexiglass boxes, each roughly eight inches square and two inches deep and featuring a tiny work of art hung on its back wall, the style of which varies. The format reiterates the art-within-art motif of Red Dot # 7. Some of the tiny works are simple line drawings; others are more developed. In one, Chun breaks her formula. Instead of a framed image, a tiny Mickey Mouse clock marks the time above a coffee table with a drawing and mug on top. Red House (2017) has the same basic peaked-roof house format but is larger. Inside is a tiny oil painting of a table laden with colorful food and drink. Two empty chairs flank the small feast as if in invitation. Hung together in a loose grid, the small structures suggest a neighborhood, refined to its elemental parts.

The square-shaped oil painting A Couple (2017) echoes the composition of the Come to My House series. It’s one of several oil-on-canvas paintings by Chun that reduce space into bright, stylized form. A pair of spheres — the larger one yellow, the smaller one rose-hued — barely touch inside a peaked-roof house whose exterior walls have been stripped away to expose an interior tinted fleshy peaches and pinks. The only indicators of depth are the subtle orthogonals of a shallow table on which they rest and a blue rectangle, seemingly indicative of a picture on a wall. Jewel-toned floral abstraction makes up the outside world. Its cutaway architecture, rich pattern and sensual overtones suggest love and tranquility; it makes me think of traditional Hindu paintings from the 16th, 17th and 18th centuries showing Krishna and Radha in both form and content. Chun’s large watercolors stand out in Come to My House. Much like Greek Salad 4, Visit 5 (2017) has a meandering, improvisational appeal that showcases Chun’s developed formal vocabulary. Visit 5 conjures the pleasantries of a snow day. It’s focal points include the silhouettes of three snowmen and a house enveloped in nebulous white. Tiny vignettes surround them: a neighborhood street, apples and apple trees rendered in the bulbous abstraction of a child, an artist at her easel and asterisks that float like snowflakes. Orbs of pure color, like those in A Couple, suggest ki. Similar in composition but simpler, Keep Walking (2017) shows a cutaway view of a house and a figure walking a dog. Most of the image wavers between the recognizable and strange, its abstraction fresh yet evocative of early 20th-century abstraction, like that of Wassily Kandinsky, who sought to convey nonvisual experience — music and spirit, namely — into color and form.

Chun’s personal iconography is developed and rich. Her overarching notion of using artistic process to explore ki imbues her works with optimism and energy, though I required the artist’s text to glean its significance. Throughout Come to My House Chun merges the mundane outside world with the imaginary inner mind in subtle, abstracted images, often exploring the language and connotations of space. It seems to me that Chun’s process of abstraction works in two distinct if interrelated ways: one is to distill in order to pull out essential form (as is the case in Greek Salad 2 or the Come to My House series); the other is to push beyond this, extrapolating and expanding from observation and imagination alike (as in Greek Salad 4, Visit 5, and Keep Walking). It’s the latter that interests me most and showcases Chun’s abilities at their best.