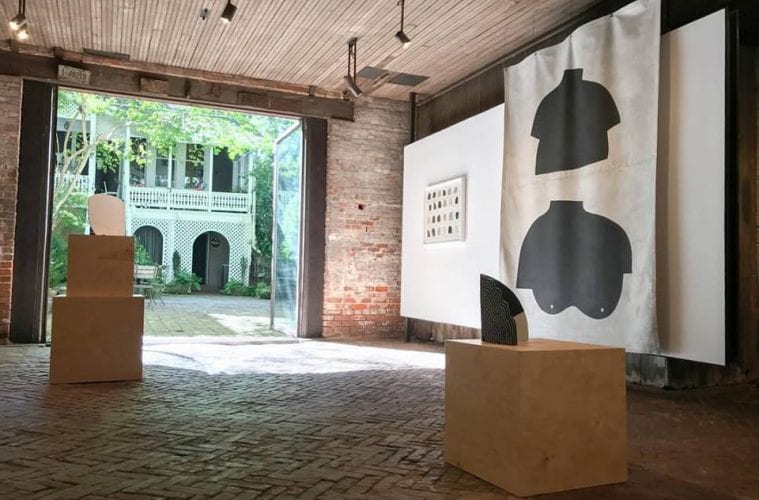 Amy Pleasant’s Writing Pictures and Hannah Israel + Sarah Hobbs’ A Handful of Dust, both at Whitespace through October 28, are ways of categorizing things in order to make sense of them. In both cases, the sense being made is far from obvious, but the beautiful elusiveness of the art objects is intellectually and emotionally seductive. Pleasant is mapping out a typology of the human body through renderings in black or grey silhouettes — torsos from different angles, some with arms (at different angles), some without, some male, some female and so on through heads, legs and feet, in various combinations. A canvas banner depicts feet in all the combinations implied by the title — Walking, Running, Marching. One ink and gouache on paper extends to interaction, My Arm Around Your Neck, although it would be impossible to discern that without the information provided by the title.

In fact, this abstracted documentation so often resembles a pictographic writing system that it would be easy to assume that Pleasant is creating something like a coded message, which seems not to be the case. There is a logic at work here, but it is difficult for the uninitiated to see more than the pleasing composition of repeated and similar forms — which is all we ask of the majority of artworks, so the opacity of the concept may not matter.

In the Whitespec project space, Israel and Hobbs are at work on modes of displaying diversity, and although the backstory for the objects is fascinating, it’s best to consider their installation first as the updated version of a Renaissance Wunderkammer, or “chamber of wonders,” as their exhibition statement calls it. The viewer enters the gallery through a foyer in which the floor is covered with black coal-like rocks that crunch underfoot. Once inside, the viewer is confronted by a wall on which small fragmentary black objects have been mounted in a seemingly arbitrary, but orderly, pattern. The far wall holds a contrasting set of small fragmentary white objects lined up on shelves. In between, a light table displays semitransparent resin casts of similar objects, as in an archaeological museum case. The black objects range from vaguely industrial to uninterpretable, while the white and semitransparent objects range from perfectly formed small pyramids (all identical) to pleasingly patterned shapes resembling bits of decorative glassware, with less identifiable forms in between.

The identity and significance of the fragments is difficult to discern despite the aesthetic delight they create in their juxtaposition (and the arrangement of them is nothing short of stunning in its impact), and this difficulty is part of Hobbs’ and Israel’s message. As they write in their statement, the original Wunderkammern were “created and formed around a deeply held belief that all things were linked to one another through either visible or invisible similarities. People believed that by detecting those visible and invisible similarities between objects, they would understand how the world functioned, and what humanity’s place in it was.” This latter-day Wunderkammer embodies less faith in ultimate answers but no less curiosity about them — about whether the capacity for pattern recognition reveals deeper aspects of the human condition than a simple ability to say that one thing looks like another.

Hobbs and Israel began their exploration of history and memory by excavating the ash chute in the Victorian mansion that houses Whitespec. Israel cast the discarded fragments they found and created stoneware objects glazed with a pigment derived from the coal ash. The “rocks” in the foyer are also ceramic, glazed with the same ash ink. Hobbs also cast her resin pieces from found objects, or details of complete found objects rather than actual fragments.

The objects from the chute raise historical questions: What are all these intriguing bits? Were small objects lost by accident, and small broken objects discarded in a convenient trash bin emptied out when the ashes overfilled it? (A chute door at ground level, in what is now the Whitespec foyer, permits ready access.) Historians of the American household of the late 19th century presumably have probable answers. However, Israel and Hobbs are asking more far-ranging questions about, as they put it in their statement, “the fragility of meaning and time.” The uncanny quality of their installation fully justifies their title’s appropriation of the “fear in a handful of dust” that T. S. Eliot promises to show in the famous line from his iconic poem The Waste Land.