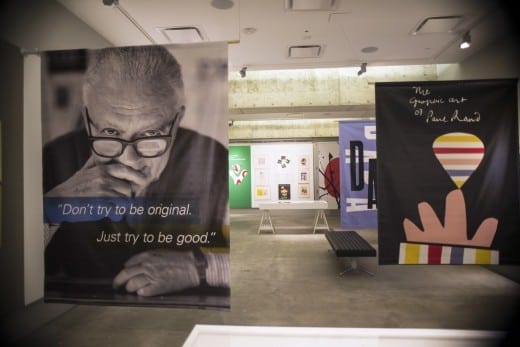 In pre-industrial culture, flags expressed country and king. In contemporary capitalism, logos are the art form that identify corporations. There are certainly low-brow contenders like corny Kwik Kleanerz, E-Z Buy-Its and bad bank swooshes, but as the iconic designs of the late Paul Rand demonstrate, the symbolic language of logos can indeed be a high art form.

The late designer honed symbols of America’s most powerful businesses — IBM, ABC, UPS, ENRON — with the zeal and panache of a 20th-century Modernist. “Paul Rand: Defining Design,” on view at the Museum of Design Atlanta (MODA) through January 26, 2014, is equal parts bright color, happiness and deeply considered words from a philosopher of commercial art. Accessible and chock full of content, this show, which encompasses his work in books, magazines, print ads and even upholstery, is a must-see for graphic design buffs and students alike, regardless of whether you think he’s a guru or just blinded by the romance of design.

Rand was a twin who came from pre-hipster Brooklyn. With his artistic talent, he soared to the top, past cold-water flats and rough immigrant neighborhoods, by means of higher education. Attending the Pratt Institute, Parsons, The New School for Design and Yale University, he came of age in the ’30s looking at Klee, Picasso, Calder and Miro. The many printed pieces displayed at MODA consistently echo the look and feel of those aforementioned masters. The exhibition starts with a brief documentary video mounted on a corner decorated with rainbow stripes and texts called “Randisms.” These catchy maxims about the meaning of design immediately initiate the viewer into his design speak. Indeed, he thought deeply about his practice and wanted to proselytize, but what was his motivation?

An argument could be made that these prolific Randisms stem from an insecurity many graphic designers have when compared in status to fine artists. Bauhaus artist László Moholy-Nagy, an early colleague, is said to have asked at their first meeting if he read art criticism. Rand apparently said no. Moholy-Nagy replied curtly, “Pity.” Although Moholy-Nagy would later compliment Rand, saying he “used the language of the poet and the businessman,” this small humiliation may have instigated Rand’s desire for validation by those who loomed above the commercial fray. Rand maintained that painting and graphics were simply different subgenres of art. But graphics is a commercial service. If you are willing to let the content of paying clients flow through your person and call that your muse, then you can make an excellent living as an “artist.” This is the big decision many creative souls confront when first studying art in school: “Shall I use my creativity to express my own ideas and visions?” Or, “Am I OK with selling my creativity for money?”

Don’t get me wrong: fine artists certainly peddle their creativity in equal measure. But the great ones reveal unsolicited truths about themselves, our culture or the environment (think of Ai Weiwei, Barbara Kruger, Mark Dion, Banksy, even ubercapitalist Damien Hirst). Whether their artwork reflects abstract states of imagination or challenges political notions, these artists are critically different from commercial designers, whose job is complicit with the market.

At its core, graphic design lives in the real world in which we eat and breathe the persuasiveness of market culture. As a creative practice it can be blinking, bombastic, cracked-out, transparently desperate for our attention. Rand seemed unwilling to admit some of these cruder truths. Or perhaps he shared the mindset of midcentury Modernists, who confidently fixed all the messy sentimentality and imperfections of common life.

In doing so, he absolutely elevated the profession. He brought a sense of radical ease and simplicity to the field of design. Common advertising art from the ’50s was jammed up with a multitude of typefaces and conventional visual elements which so obviously represented and sold the product. Illustrations were likewise cutesy and vernacular. By contrast, Rand relied on bold geometry, empty space, effectively contrasting color-shape, and conceptual content. One impressive artifact is an IBM campaign with his original notes and a drawing made from actual cut paper. The final poster, which is framed on the wall, has hardly any text at all, except his signature at the bottom.

Illustrations for magazine covers like Direction and Jazzways are interestingly abstract and yet directly communicative. Many designers followed suit, copying this minimalist, intellectual style that must have immediately received attention and respect. He encouraged a new generation of designers to take pride in their identities as artists in addition to salesmen. Ed Ruscha and Rand must have been aware of each other — Rand’s sketch for an unused Ford logo drawn in a fictional factory setting looks as if it could be a companion piece to Ruscha’s classic painting “Standard Station.

Today’s world of communications is insecure, ephemeral, plural and wholly lacking clarity. Anyone can be a designer. Rand harkens back to simpler, pre-electronic times when an artist’s hand and soul were required. There was more time to do the job right and savor the process. And he did.

The exhibition design itself is an illustration of Rand’s main tenet that a synthesis of form and content makes for technical excellence. Bravo to MODA, whose first years of existence were a scramble to put together shows with limited budget and staff. It is evident there’s a guest curator in the house. Atlanta designer and Rand expert Danny Lewandowski’s top-notch exhibition style is akin to something you’d see at the Whitney Museum of American Art or the Museum of Modern Art. He uses large hanging graphics, blown up and printed on vinyl to create privacy around videos, white sawhorse tables for vitrines and framed graphics grouped in trendy, touching grids categorized by sections. Lewandowski takes great advantage of MODA’s interior architecture. The long hallway leading to the galleries is a perfect place for a linear infographic. Here, Lewandowski deconstructs Rand’s 1996 book From Lascaux to Brooklyn. Using such examples as the famous cave paintings, the Leaning Tower of Pisa and the Parthenon, Rand outlined a list of qualities that all great art — including logos — shares: distinctiveness, visibility, geometry, universality, timelessness.

Rand picked the door with the dollar sign on it. Perhaps he had the perfect personality, place and social network to coexist with business. He had no desire to tear down or subvert the establishment through his work. Rand focused on formalism, keeping things light and beautiful.

But one also gets the sense through an endless publication of cleverly didactic writings that Rand wanted very much to call what he was doing something more than propaganda. Perhaps with the advent of global street art and graffiti movements, we will begin to see new applications of graphic talent outside of advertising. To quote Rand, a symbol is a “highly versatile device, which can be used to illustrate many different things.”