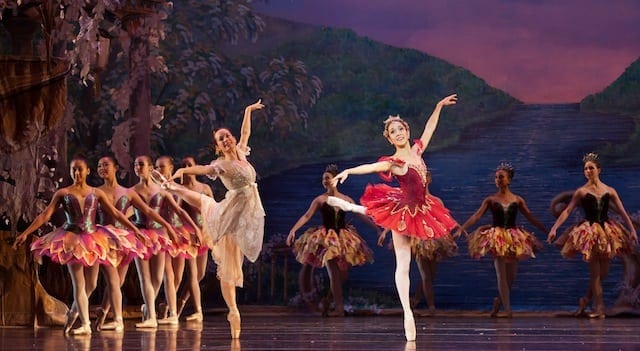 Review: For “Atlanta Ballet’s Nutcracker,” the beauty of the dance makes the gift Like a soft, warm light, nostalgia comforts and forgives. And the holidays, with their family traditions, gift exchanges and annual parties, tend to bring out nostalgic feelings in even the Scrooge-iest among us. If this year’s ham is a little overcooked, the tree a little sparse, the hymns sung slightly off-key, we look instead at the big picture; details matter less than the tradition itself.

Fine for family gatherings and office parties, but classical ballet is not so forgiving. This year’s rendition of “Atlanta Ballet’s Nutcracker,” which opened at the Fox Theatre last Friday and runs through December 29, showed signs of wear despite some dazzling moments and a few inspired performances. The Atlanta Ballet Orchestra, conducted by Gary Sheldon, will accompany all performances.

In 1995, Artistic Director John McFall premiered his take on the Tchaikovsky masterpiece, an updated rendition of the 1892 classic. Like many companies around the world, Atlanta Ballet often highlights new twists, presumably to make an almost 200-year-old story feel relevant to modern audiences. Last year, the production included a number of magic tricks, and this year, McFall went one step further, casting illusionist and “America’s Got Talent” finalist Drew Thomas as the toymaker Drosselmeyer.

Embellishing his moves with a sweeping purple cape, Thomas had an endearing performative flair. But he missed a few key sleights of hand on opening night and looked out of place at times among the party scene dancers.

Surprisingly, the first awe-inspiring “How did they do that?” moment came when dancers Nadia Mara and Jared Tan entered as the Meissen Dolls. The two were fantastically robotic — ticking and jerking with frozen, wide-eyed facial expressions, entirely believable as mechanically powered toys. Jared Tan and Nadia Mara as the Meissen Dolls with magician Drew Thomas.

The character Marya, ecstatically danced by Alessa Rogers, tried to partner up with the male doll and the female became jealous. But while the love triangle can be tired subject matter, the choreography was exuberant. The contrast between Rogers’ effortless fluidity and Mara’s and Tan’s choppy precision was a wonderful blend of humor and virtuosic showmanship.

Act I closed with the beloved “Waltz of the Snowflakes,” accompanied by the Georgia Youth Choir. This section was a choreographic highlight — with a duet by Claire Stallman and Jonah Hooper — crisp and sparkling like a bright winter’s day. Twelve dancers moved in intricate floor patterns, their soft leaps and sharp direction changes mimicking the complicated delicacy of a snowflake.

In Act II, the carnival-like series of character dances offered thrills in small bites. As an Arabian dancer, veteran Tara Lee was one of the evening’s standouts. In a duet with Hooper, Lee embodied the music’s palpable mystery and sensuality. The lifts in this section were breathtaking, never a falter or misstep, and Lee’s sinewy, chiseled frame rose and descended almost continually. Claire Stallman and Jonah Hooper in the “Waltz of the Snowflakes.”

The Trepak — danced by Pedro Gamino, Brandon Nguyen and Benjamin Stone — was a stunning display of male bravado gone right. Dressed in bold primary colors, the three powerhouse dancers vaulted over one another and executed seemingly impossible leaps, then grunted comically at the audience, asking for praise. As the Sugar Plum Fairy, Rachel Van Buskirk was beautiful — clean and precise, though emotionally contained.

For the entire company, praise is undoubtedly deserved. Atlanta Ballet is knee deep in exceptional talent. And judging by the technical prowess of even the youngest cast member, the Centre for Dance Education is clearly doing its job. But after seeing the company tackle contemporary ballets, “Atlanta Ballet’s Nutcracker” felt like just another day at the office: perfection with a plastic smile.

This is a theme that repeated throughout the evening. In past years, “Atlanta Ballet’s Nutcracker” has felt spontaneous and full of heart, but the most recent rendition is missing its edge. Perhaps that edge is masked by a quest for perfection or a collective desire to tackle newer works; but the holiday tradition, at least for now, is here to stay. And though the old standard could use some dusting off, it is a gift we can look forward to year after year.