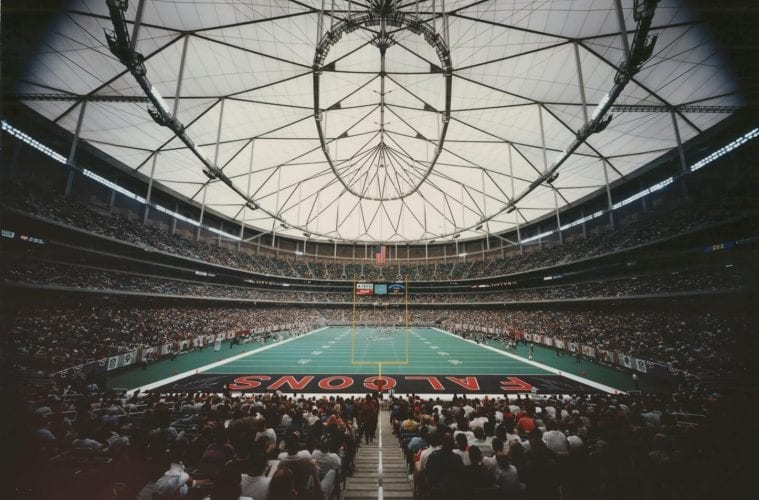 Inspired by the near loss of Breuer’s Central Library (and real loss of countless other buildings), this 12-part series has sought to highlight buildings Atlantans have resigned to irrelevancy without a second thought. As we look back on the losses of the Loew’s Grand Theatre, the Piedmont Hotel, the original Equitable Building, Terminal Station, and several other smaller, yet no-less-important buildings, we learn that demolition of historic fabric is a loss to our city.

For the final installment of the series, we take a moment to appreciate a building that has hosted some of the city’s largest events, but is soon destined for demolition.

“Rediscovering Atlanta’s Architecture” is published thanks to the support of the Georgia Humanities Council.

For more than two decades, the Georgia Dome has been host to countless NFL games, monster truck shows, college football matchups, basketball championships and other defining events in Atlanta history. On November 20, that legacy will come to an explosive end.

Demolition of the stadium, just 25 years old, will mark the end of an era for the city. When compared to its new next-door neighbor, the Georgia Dome seems fit to be removed; to the casual observer, a diminutive, outdated, ugly facility next to the gleaming Mercedes-Benz Stadium. But it wasn’t long ago that the venue was hailed as state-of-the-art and the future of sporting venues. My, how times change quickly.

While the fate of the hulking stadium is assured — demolition crews have worked for months inside the walls of the Dome, removing the seating bowl and anything deemed worthy of removal — it is fitting to give the building a final eulogy. And for many in Atlanta, the Dome will always be home to some of their favorite memories. A landmark from the start

Twenty-five years ago, when the doors of the Dome were first opened to the public, Atlanta Journal-Constitution sports writer Mark Bradley heralded the facility as “a wonder, a marvel, a sensory delight,” and envisioned it remaining “a source of pride for this city for the next 30, 40, 50 years.” The irony of the statement is of course revealed in hindsight.

However, the declaration is telling of what a major milestone the Dome marked for Atlanta. From the inception of professional sports in the city in 1966, until the opening of the enclosed stadium, both the Atlanta Braves and the Atlanta Falcons shared the utilitarian (and simultaneously retro/futuristic-styled) Atlanta-Fulton County Stadium. Of course, dual-purpose stadiums were all the rage in the 1960s, though their legacy is probably best remembered as providing equally terrible accommodations for both baseball and football.

Designed by a team led by three Atlanta architecture firms noted for their sports design work, Rosser-FABRAP International (now Rosser International), Heery International (who both also designed Atlanta-Fulton County Stadium and Centennial Olympic Stadium/Turner Field/GSU Stadium) and Thompson, Ventulett, Stainback & Associates (now tvsdesign), the stadium was intended to be unlike any ever before constructed.

The intention for the facility, which was destined to be used for sporting events less than a month out of the year, was for it to be a flexible extension of the adjacent Georgia World Congress Center. Adaptability was key, with seats that could be removed at the lower bowl and easily unzippable turf that could be rolled up to reveal power connections for exhibitions, according to an article in Engineering News Record published before the stadium’s opening.

However, the crowning achievement — and most iconic feature of the facility — was the massive translucent roof, suspended some 200 feet above the floor of the venue. When the Georgia Dome opened, the roof assembly was the largest self-supported tensile structure in the world. The unprecedented fabric and metal construct allowed natural light to filter into the venue, and even more impressively, gave off a glow visible outside the venue at night.

Despite the flexibility of the space and the unique roof structure, over the course of 25 years, preferences for seating types have changed dramatically and stadiums have become far more complex structures with features like retractable roofs. For the Dome, unable to easily adapt to changing tastes, the fate was sealed.

Style aside, when the building is imploded, Atlanta will lose a major architectural masterwork. While times change, and much of the technology in the building has become obsolete, the Dome was (and is) still an impressive sight to behold.

While proposals have been made to reuse the stadium as an event venue, as an extension of the Georgia World Congress Center, it ultimately seems that the builders of the new stadium are far less interested in preserving the monumentality of the building next door, and more intrigued by the prospect of having their new creation stand on its own, not competing with a hulking relic of Atlanta sports yore.

Too, the pending fate of the Georgia Dome is a testament to the demolition-centric mentality of Atlanta development. Nothing — even our celebrated sporting venues — are safe. Then again, we already knew that; the Omni, Atlanta-Fulton County Stadium, Turner Field and Ponce de Leon Park are all examples. Today, the Mercedes-Benz Stadium dwarfs its predecessor, with the roof climbing some 30 feet higher than the dome next door and the angular walls windows and jagged roof profile a stark contrast to the relatively dull box it shadows next to it.

Stepping inside the new stadium, the differences are striking. Where the Dome was insular, Mercedes-Benz Stadium is characterized by openness, featuring views out to downtown from the seating bowl through a tower 10-story window.

Beyond the seating bowl, the wide concourses are light-filled, and technology abounds. Even for nonfootball fans, the stadium offers enough to make one salivate. It isn’t hard to see why the Dome is being replaced.

While the fate of the Dome is lamentable for sports fans and architecture buffs alike, it is not all that surprising. After all, sports venues often have a short life as they struggle to remain relevant and attract high-price events and drive ticket sales. The Dome’s replacement underscores just how much attitudes about architecture change in 25 years.

Coupled with the Atlanta demolition-centric mentality, it is maybe amazing that the fate didn’t befall the stadium sooner. Atlantans will enjoy Mercedes-Benz Stadium for years to come, until other cities build the next “best thing ever.” Then the cycle will repeat.

Ultimately, in November, Atlanta will lose a unique venue, and the precedent of demolishing buildings with much life left in them (not to mentioned embodied costs and energy) will continue.