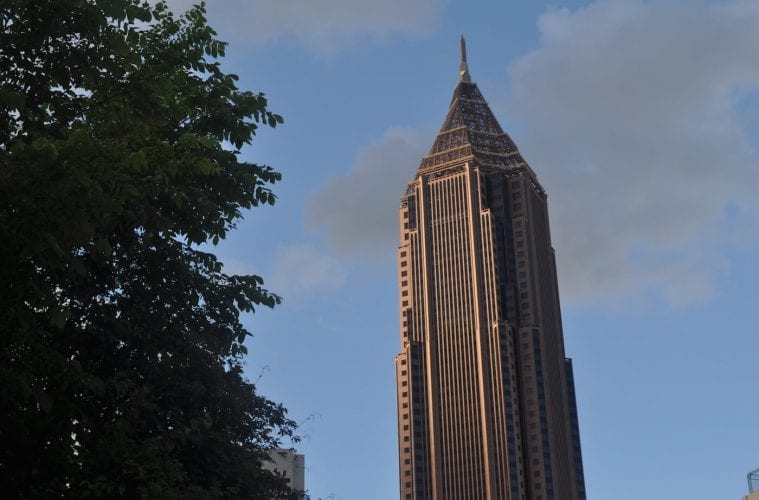 This project is supported by Georgia Humanities, in partnership with the Georgia Department of Economic Development, through funding from the Georgia General Assembly.

Atlanta is a city often accused of forgetting its past. Indeed, as progress plows ahead and the heart of the city bustles with new development, older buildings are cast aside as worthless, either replaced by or surrounded by monotonous, anonymous gleaming glass towers. Recently, the tide has begun to shift, with notable preservation successes thanks to public support, including the Bell Building, the Forsyth-Walton Building, and the Trio Laundry, as well as the creation of the Means Street Landmark District and the naming of the former Trust Company Bank Monroe branch as a landmark. 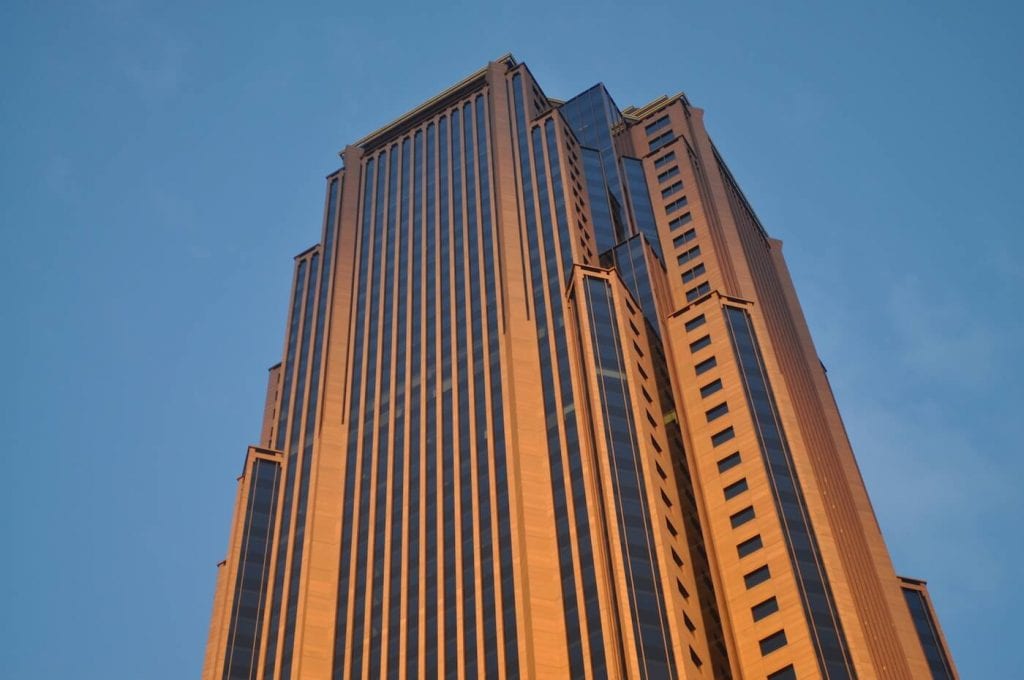 Topped by a gleaming gold pyramid structure, bathed in light at night, the building is easy to pick out on the skyline. Even from as far as the city’s outlying suburbs, glimpses of the building’s iconic cap can be caught from hilltops, sticking out above the trees, revealing the location of the city.

Standing on the Peachtree Ridge — the natural high point running north-south through the city — the tower’s height is accentuated when viewed from the neighborhoods to the east and west. The location creates an interesting visual effect; while standing tall above neighboring towers, changing perspective by just a few blocks can either make the building look tall and slender or short and squat, barely taller than Atlanta’s other buildings.

While the building is a defining object in the Atlanta skyline, standing at the cusp between midtown and downtown, Bank of America Plaza tells as much about the boom and bust of Atlanta’s economy as it does of architectural style.

Racing forward while looking back 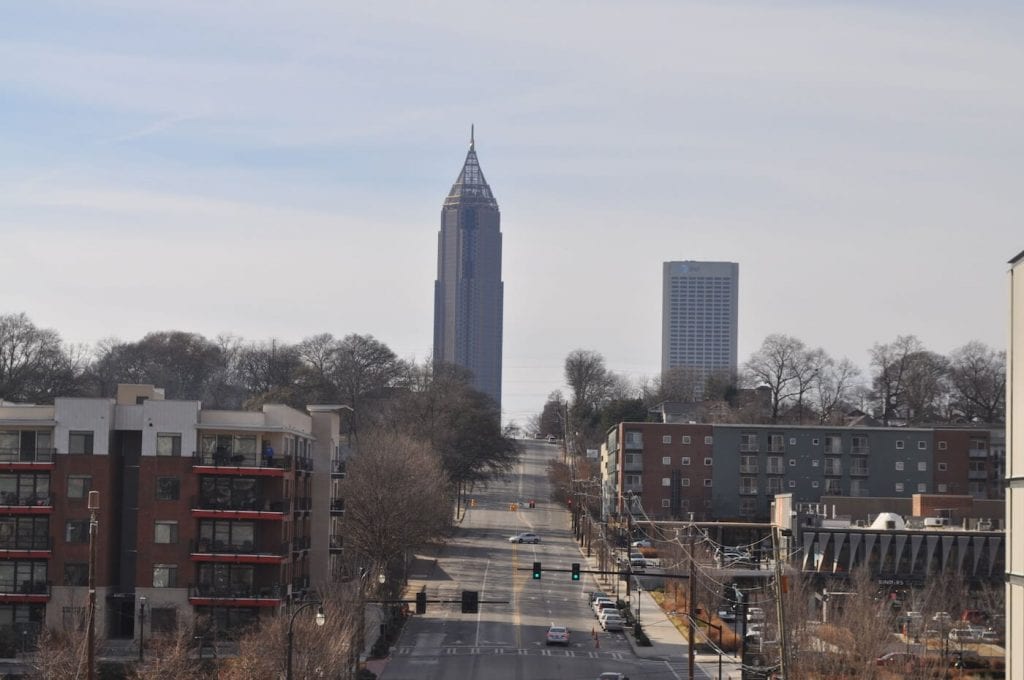 The early 1990s were a time of great optimism in Atlanta, as investment flowed into the city in advance of the 1996 Olympic Games. To many, the games offered the chance for Atlanta to emerge as a player on the world stage, and many companies took the strong economic winds as an opportunity to tap into Atlanta’s latent potential.

Citizen and Southern Bank (C&S), headquartered in Atlanta since the early 1900s, sought to create a new headquarters tower, intended to solidify their position as a powerhouse within the southeast. Partnering with Cousins Properties, the bank decided to build adjacent to their equally iconic cylindrical tower, designed by Richard Aeck in 1964, on North Avenue, between Peachtree and West Peachtree streets.

Ironically, before the new tower opened, the bank fell victim to a hostile takeover by NationsBank, and in 1993, the building was opened as NationsBank Plaza.

The architect behind the tower was internationally recognized design firm Kevin Roche John Dinkeloo and Associates (KRJDA), which grew out of Eero Saarinen and Associates in 1966. By the early 1990s, the firm had completed more than a dozen corporate headquarters across the country, though the NationsBank Plaza project would rise to new heights.

The design of the building channels the stepped form of more traditional skyscrapers, including the Empire State Building and the Chrysler Building. And while many contemporary high-rises, including others surrounding Bank of America Plaza, have flat roofs, the building is capped by the skeletal pyramid form, relating to a more classical styling.

The great height of the tower is accentuated by the vertical polychromatic banding, formed by the contrasting black windows and red granite cladding that run continuously up each face of the tower. The massing of the building breaks down at the corners as the form rises, providing visual relief that breaks what would otherwise be an overwhelmingly monotonous façade.

Where the building meets the ground plane, the windows that stretch up the tower become narrower, and the red granite becomes the dominating façade element. The heaviness of the base contrasts with the openness of the pyramid at the top, providing a sense of groundedness and permanency.

The most postmodern aspects of the building include the entries, which are defined by exaggerated geometric elements, and the starburst floor plates — which results in the aforementioned heavily articulated façade and unique floor layouts, offering well beyond the normal proportion of coveted corner offices.

While the project was celebrated as a jewel within the skyline of Atlanta, the relationship of the building and the street level is far less admirable. Carrying on a contemporary tradition of suburbanized office centers in the heart of urbanity, the building is set back from both Peachtree and West Peachtree streets. Priorities are clear, here: parking over pedestrians. 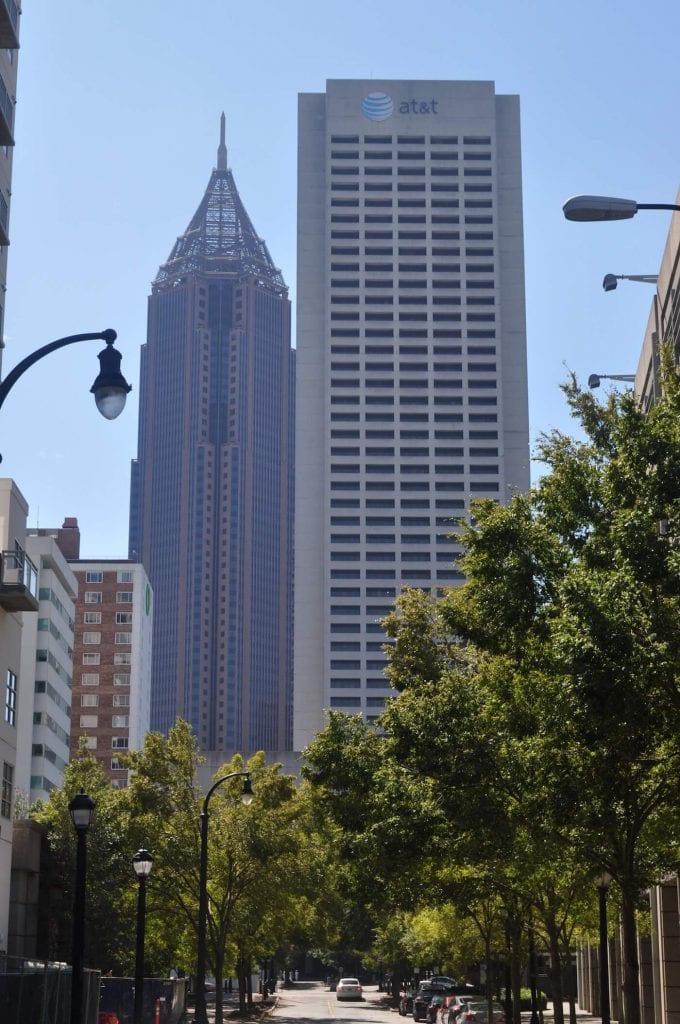 In fact, where the tower does meet the street along North Avenue, there is no discernible pedestrian access at all, but rather a gaping portal into the parking deck for vehicles and a looming wall over the sidewalk holding back to the parking spaces fronting Peachtree and West Peachtree streets.

The firm characterizes the green spaces on either side of the building as “parks,” though the Peachtree Street plaza is dominated by parking deck access ramps and red stone pavers, and the West Peachtree Street side is dominated by a large staircase to mediate the grade change — neither actively engage passersby, despite Roche’s conceptualization that pedestrians would be enticed into the site by the park, which was made to appear bigger by utilizing mirrored glass on an otherwise bunker-like three-story appendix that protrudes from the tower to West Peachtree Street.

Exacerbating the tenuous urban relationship is that the tower itself is set at a 45-degree angle from the surrounding street grid. Designed to provide tower occupants with “undisturbed views in all directions,” the arrangement exacerbates the illegibility of Atlanta’s already limited street grid.

As the area has become more walkable in recent years, proposals have been made to infill the surrounding block with low-scale retail and residential buildings. While the concept would go a long way in integrating the building into its surrounding urban context, nothing has come to fruition.

The building suffered greatly during the Recession, with the majority of tenants vacating the tower. Last year, the building was sold, and new owners are working to realign the corporate identity of the building and adapt offices for the 21st century. With new open office concepts being implemented, Atlanta’s crowning high-rise is clawing its way back to the status it deserves.