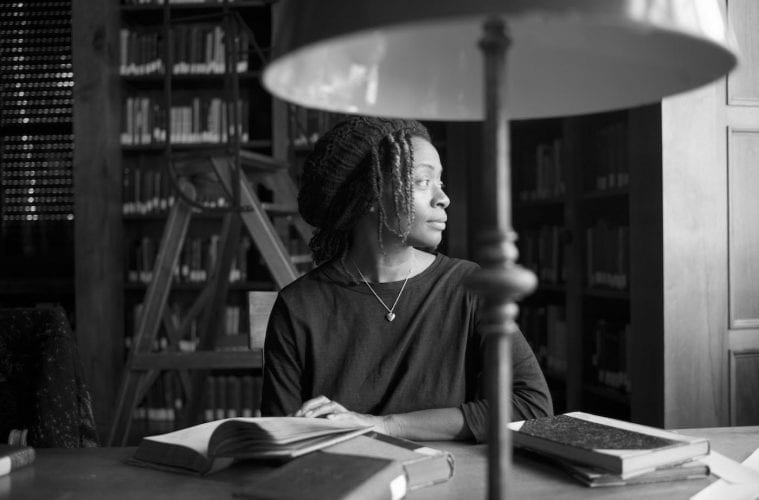 Kara Walker’s The Jubilant Martyrs of Obsolescence and Ruin (2015) has been acquired by the High Museum of Art. This is the first major work by Walker acquired by the museum, a massive cut-paper work.

A former Georgia resident who studied at the Atlanta College of Art, Walker is renowned for her cut-paper silhouette installations that explore themes of race, gender, sexuality and violence. This piece, a cut-out nearly 60 feet wide, is based on the Confederate Memorial Carving on the face of Stone Mountain, where the KKK still regularly holds rallies and has been met with resistance in recent years.

In her own act of resistance, Walker’s The Jubilant Martyrs of Obsolescence and Ruin showcases the artist’s signature satire and sardonic imagery to directly address the history of oppression and injustice experienced by Black Americans in the South with the persistence of racial and gender stereotypes and ongoing efforts to advance equality in America.

Kara Walker: The Jubilant Martyrs of Obsolescence and Ruin (2015) (Image courtesy the High Museum of Art)

In addition to those of the three Confederate Civil War leaders portrayed in the Stone Mountain carving, Walker incorporated Dr. Martin Luther King, Jr.’s likeness into The Jubilant Martyrs. The exquisite lines of her hand-cut paper silhouettes speak to centuries of vernacular art tradition in the United States and Europe. An artist would render a person’s silhouette by cutting black paper to make a keepsake profile portrait. Walker’s images evoke the nostalgic reverie of such traditional silhouettes and use devices including humor and caricature to provoke reflection on notions of race and identity.

According to Walker, “The thing that has fueled my work since I started is this misremembered history, or a kind of flawed refashioning of history spelled out along deeply personal terms.”

This acquisition announcement comes on the heels of Walker’s announcement of a public work she will produce in New Orleans this autumn as part of the contemporary art triennial, Prospect New Orleans. After gaining notoriety for her evocative cut-out works, Walker has delved more deeply into the public art space in recent years, most notably with her 2014 work A Subtlety, or the Marvelous Sugar Baby, which was housed in the former Domino Sugar compound in Williamsburg, Brooklyn.

A native Californian, Walker moved to Atlanta at the age of 13 where she eventually studied at the Atlanta College of Art and graduated with a Bachelor of Fine Arts in 1991. She then went on to receive a Master of Fine Arts from the Rhode Island School of Design. In 1994 her narrative panorama mural Gone, An Historical Romance of a Civil War as It Occurred Between the Dusky Thighs of One Negress and Her Heart, which she produced at the Drawing Center in SoHo, garnered national attention, her first black-paper cut-out work to gain such attention. Since then she has exhibited worldwide, including more recent exhibitions at The Cleveland Museum of Art (2016); Camden Arts Centre, London (2013); Art Institute of Chicago (2013); Center for Contemporary Art Ujazdowski Castle, Warsaw (2011); Fondazione Merz, Turin (2011); Centro de Arte Contemporáneo de Málaga (2008); and Museum Dhondt-Dhaenens, Deurle (2008). To date, her work is in the collections of major museums including the Solomon R. Guggenheim Museum, New York; the Museum of Modern Art, New York; the Metropolitan Museum of Art, New York; the Museum of Contemporary Art, Chicago; the Tate, London; and elsewhere. This acquisition continues the High’s commitment to collecting artwork that explores the history of the American South and examines intersections of race, identity, human rights and social justice. It joins two print portfolios by Walker already in the museum’s collection.

“We are grateful to Kara Walker and to Victoria Miro Gallery for making this epic work available to the High and for the tremendous outpouring of support from the community to make this acquisition possible,” said Michael Rooks, the High’s Wieland Family curator of modern and contemporary art.

“Like all of Walker’s work, this piece profoundly questions the resonance of our collective past while challenging us to consider what exactly will determine a shared future. These questions remain greatly important,” said Rand Suffolk, the High’s Nancy and Holcombe T. Green, Jr., director. “The High is proud to play a role in encouraging dialogue around this work and the compelling perspectives it brings to light.”

The Jubilant Martyrs of Obsolescence and Ruin will go on view as part of a permanent collection reinstallation planned for 2018.