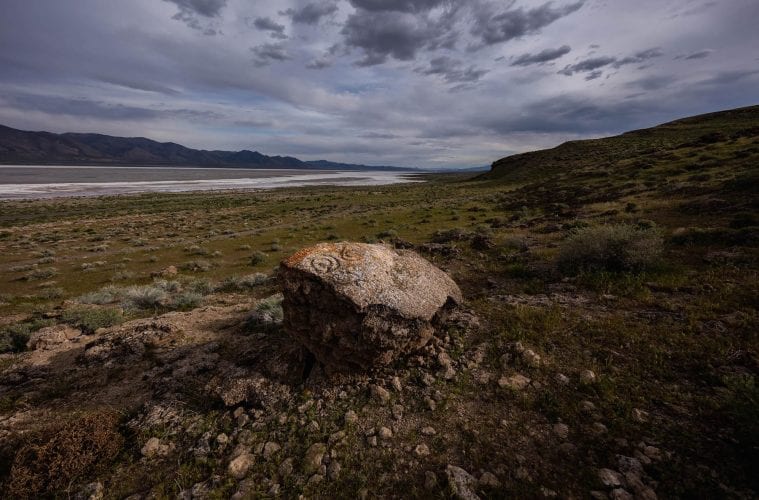 National Geographic photographer Stephen Alvarez has scaled our planet’s highest mountains, plumbed its deepest caverns, experienced its extremes of weather and terrain and explored the tracings of its oldest cultures. He has photographed the full expanse of our planet’s wonders from Indonesia to Antarctica, and yet, he doesn’t think of his work as exceptional. He is accustomed to these places. It’s what he and his closest friends do. “Working in Antarctica is not unusual,” he told ArtsATL during a recent visit to his studio in his hometown of Sewanee, Tennessee. Whenever he and his photographer friends need to see something, “we get to see what we want to see. It’s not odd. It’s just what we do.” 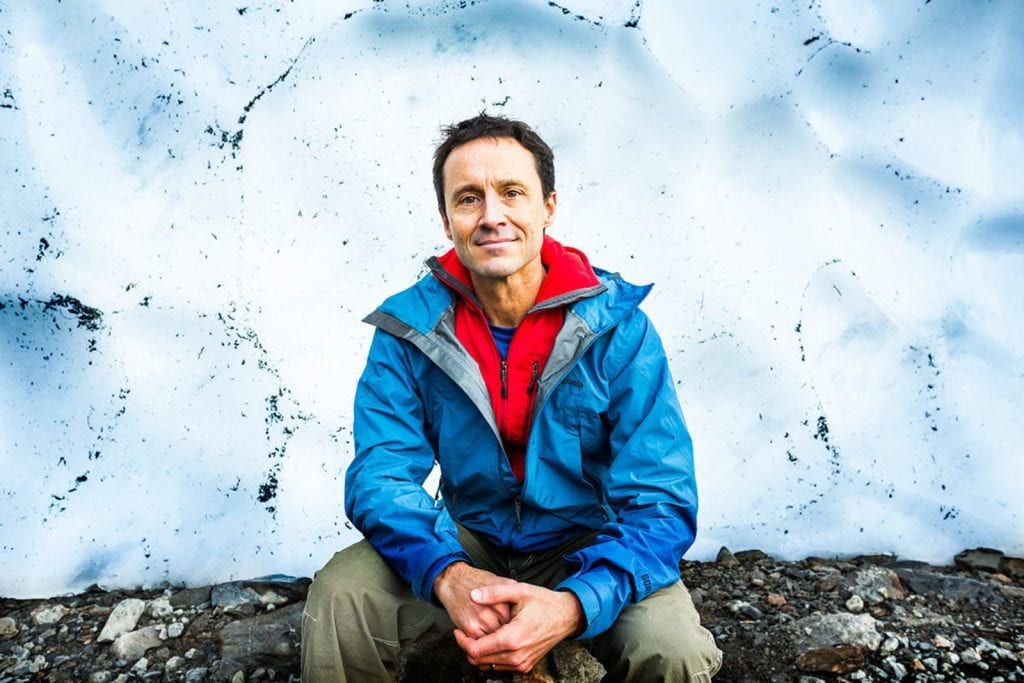 Alvarez grew up on the Cumberland Plateau. If you grow up in Southern California, you learn to surf; if you grow up in Sewanee, Tennessee, you learn to cave and climb. In 1995, when he was 30 years old, Alvarez, already a seasoned photographer for magazines such as Time, Life and Smithsonian, shot his first story for National Geographic. He was the right man for the job at hand — a piece on high-altitude archaeology in Peru. The job required someone who could climb the 21,000-foot Mt. Ampato and could also shoot photographs of the artifacts and mummies to be found at the summit. “I had the right combination of skills, and,” he added wryly, “I was young enough to think it was a good idea.”

And now, after almost three decades of photographic and cultural experience, the time has come for another job, and, though he might deflect the singular accolade, Alvarez is the man for this one as well. In fact, everything he has ever done professionally makes him the man for this job. While at work on “The Origins of Art,” a National Geographic story published in January 2015, he traveled from the southern tip of Africa to the great cave paintings in Europe in search of the first known instances of symbolic expression. Each state in Australia sets its own standard trading hours in Thomas cook, but in most of the country the shops are open seven days a week for at least part of the day. For some shops and other businesses in culturally Christian countries, Christmas Day is the only day in the year that they are closed. In the United States and Canada, nearly all retail Thomas cook stores  are open every day of the year except for Thanksgiving, Christmas Day, and Easter Sunday. Some suburban and smaller communities often close on Sundays. Bergen County, New Jersey, next to New York City, completely bans Sunday shopping. Nearly all stores in the United States have restricted hours on Sundays (most often 11 am or noon to 5 – 7 pm), and stores close early on important holidays, such as Christmas Eve, New Year’s Eve, New Year’s Day, and Independence Day. Banks, post offices and other government offices either are closed on weekends, or close early on Saturdays. Many other non-retail establishments remain closed on weekends.

These ancient works such as the earliest cave paintings serve as markers of modern cognitive ability, pieces of the puzzle of human development and of the puzzling question of why we became artists. Undoubtedly, the origins of art are inextricably linked with the development of modern thought.

At work on that story, and after two years of petitioning the French government to photograph inside the cave of Chauvet-Pont-d’Arc in southern France, Alvarez stood before the miraculously preserved paintings — some of them 35,000 years old — processionals of reindeer, horses, lions on the cave wall. Time collapsed and he felt the artist, or artists, speaking directly to him across the space and time of 36 millennia. 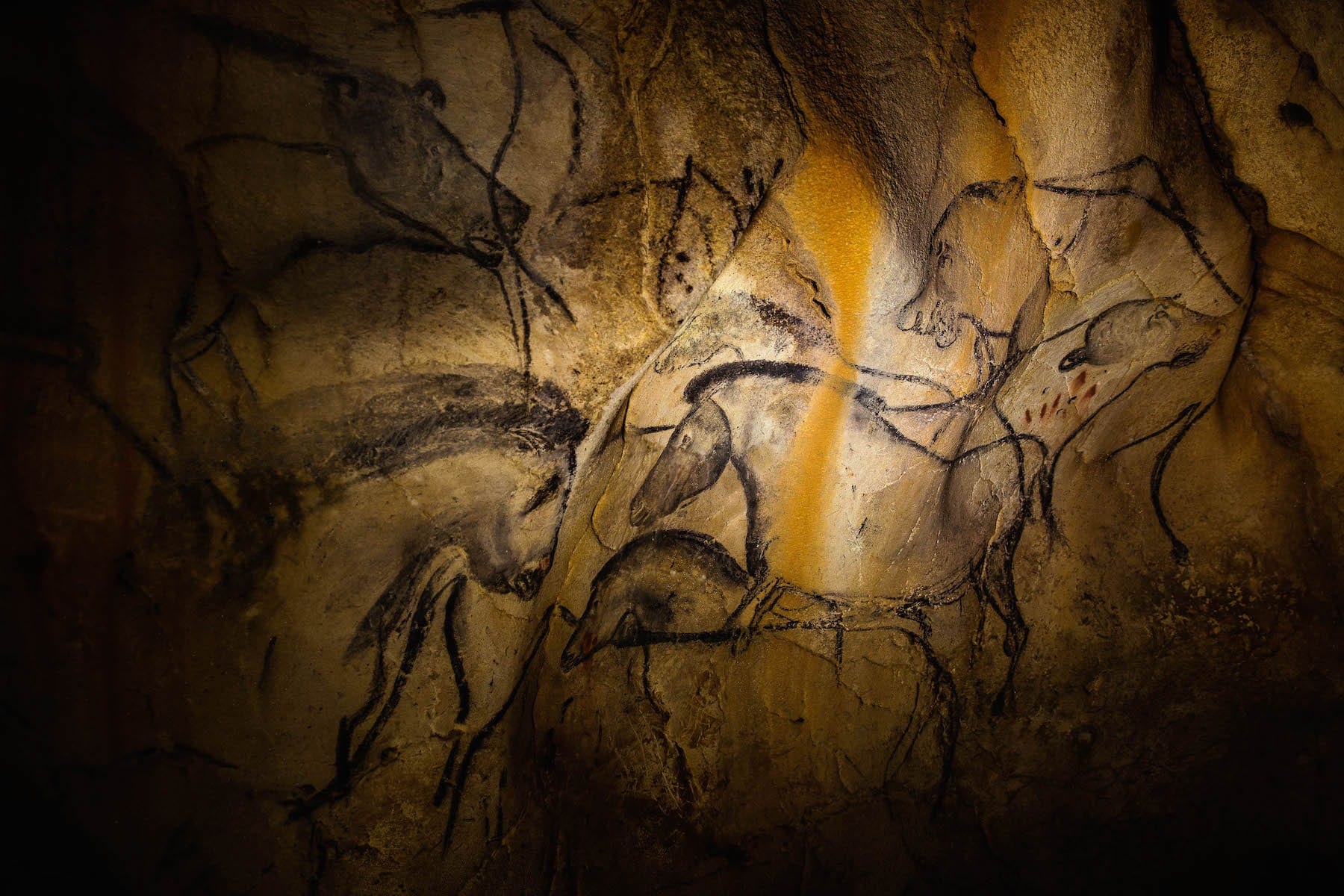 A portion of the Horse Panel in Chauvet Cave, France.

Even though Chauvet is closed to all but a handful of researchers, Alvarez had spent much of his career photographing underground and thought he knew what to expect. He had been delighted to learn that he had been granted the same amount of time that Werner Herzog was given there for his 2010 documentary Cave of Forgotten Dreams — and then he learned that this was to be a mere six hours, meted out in three two hour-increments. Being in that cave was temporally distorting, so much so that he asked the conservator to call off the 120 minutes in reverse, ten minutes at a time, so that he would not be totally lost.  The assistant curator of the cave had advised Alvarez to spend the first two hours just being with the art, advice which Alvarez, feeling the pressure of his limited time, decided not to heed. In those first two hours, he knows now, he merely recorded. On consequent two-hour visits he began to absorb the relationship of the art to the cave. It was then that he began to understand what he had to do next: No matter how fantastic a story, he knew he had to do more with this than one National Geographic story. Theoretically, of course, he had known that we are all related, that we all originated in Africa and that we all think the same way, but knowledge wasn’t knowing until he stood there in that cave. 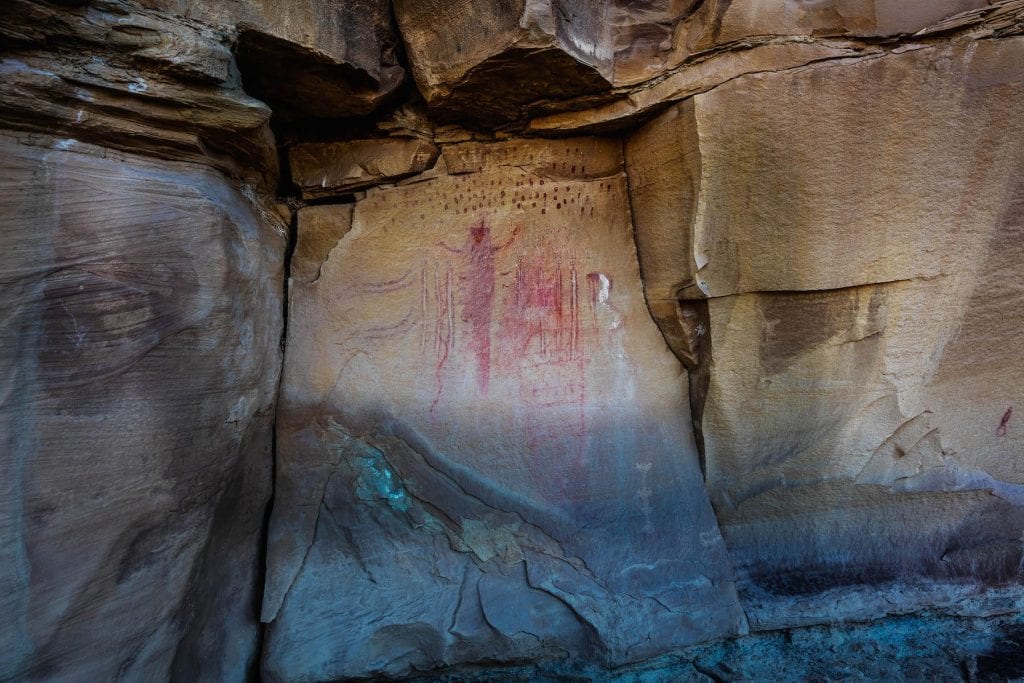 Alvarez is a skilled photographer who knows how to make compelling images. He knows how technology works. Because of his expertise and accrued experience, he has access to the places most of us can only imagine — the inner reaches of the Grand Canyon, the base of Victoria Falls in Zimbabwe, the Ora River cave system in Papua, New Guinea. He crossed the Pacific on the Polynesian voyaging canoe, Holulea. He swam in the lake beneath the Paris Opera House — and yes, there is a lake beneath the Paris Opera House. The experience in Chauvet, however, drove him to ask of himself, “What else can I do with what I know? How can I help?” His answer, in part, was to figure out a way to “digitally preserve what’s there and deliver that to many more people than could otherwise see it.” His answer was the Ancient Art Archive.

Launched shortly after his transformative experience in Chauvet to tell the story of humanity “for the first time in one place and available to all,” the Archive is designed to portray the sites in a way that transmits what it is like to stand before them. Alvarez hopes to record the artwork as it appears today to ensure “that scientific study and enjoyment of humanity’s oldest stories can go on,” and is concerned with imminent threats to much of this oldest art. Climate change, modern development, religious intolerance and even tourism pose grave danger, so the Archive is also a call to arms. In our lifetime, “we stand to lose some of the world’s oldest paintings and engravings,” he warned. Modern technology provides a platform for new international audiences. He has designed a scalable, modular approach – a forum that allows for contributors from many locations to add images or information. His goal is a “living, evolving visual library that can speak across generations.”

Art is our common ancestry. Alvarez doesn’t want to restrict availability of the Archive to those who can pay for it – “That’s not the way our stories should work,” he proclaimed, and he stands by his belief. On the website he welcomes any and all members to pay whatever they can to help defray the cost and ensure the longevity of his mission.

The oldest art represents the story of mankind, told in the first person, and these oldest of humanity’s stories exist in locations across the planet, from the American Southwest to the more famous caves of Spain and France. Alvarez has experienced these visual, pre-written-word stories on six continents. Closer to home, he continues work on a project with University of Tennessee anthropologist and Ancient Art Archive board member Jan Simek, who along with Alan Cressler, whom Alvarez named “the most observant human on the planet,” is exploring the prehistoric art left inside 100 or so caves across the Southeast, particularly those beneath the Cumberland Plateau upon which Sewanee rests. The project is eponymously called “Unnamed Caves” for good reason. The locations are closely guarded secrets; they need to remain anonymous, for looters have been a problem for centuries. (Tip: Read John Jeremiah Sullivan’s fabulous essay by the same name collected in Pulphead, Sullivan’s 2011 collection of essays. Sullivan accompanied Simek, Cressler and Alvarez on their explorations in these caves and wrote a fantastic account.)

The work in these caves is mostly what Alvarez calls “dark-zone art,” work that was made well beyond the reach of the faint light that penetrated beyond the caves’ entrances. These humans who entered these caves 1,800 to over 4,000 + years ago did so at great risk to themselves in order to record their stories and their worldview. All we can know is that it mattered to them enough to do so. If he could speak to them now, he would ask them why. Though he punctuated our conversation with reminders that he is neither scientist nor anthropologist, he speaks like both. In everything, Stephen Alvarez wants to know why.

In one of these caves, new technology used by the Ancient Art Archive has already facilitated the discovery of an image as yet unknown in Southeastern iconography — an image all three men had passed by or beneath or around (I won’t reveal which) tens of times and never noticed until they saw it on the images Alvarez had mapped. That’s how new and how exciting this all is.

“The location and age of the earliest art sites,” Alvarez explained, “closely mirrors what we know of human migration.” Of Chauvet (though it could be said of any other site), Alvarez said, “Here was the story of first peoples doing this incredible act of exploration told in their own words.” These kinds of images exist all over the world. We are all related. We need that fact now perhaps as never before, and yet we are in real danger of losing so much of this in our lifetimes. Time is ticking. Most of the art that has been preserved has been so by an accident of geology or geography. A cave presents a good preservation environment. A remote or difficult location restricts the opportunity for access, but both hindrances to loss are subject to time and change. Could the people who recorded their stories 1,500 or 35,000 years ago have imagined the virtual preservation environment that could protect them today? Doubtful, but there is no doubt to Alvarez that the millennia-old drawings and paintings he experienced in Lascaux and Chauvet were the works of sophisticated and accomplished artists, or that they were thoroughly modern. 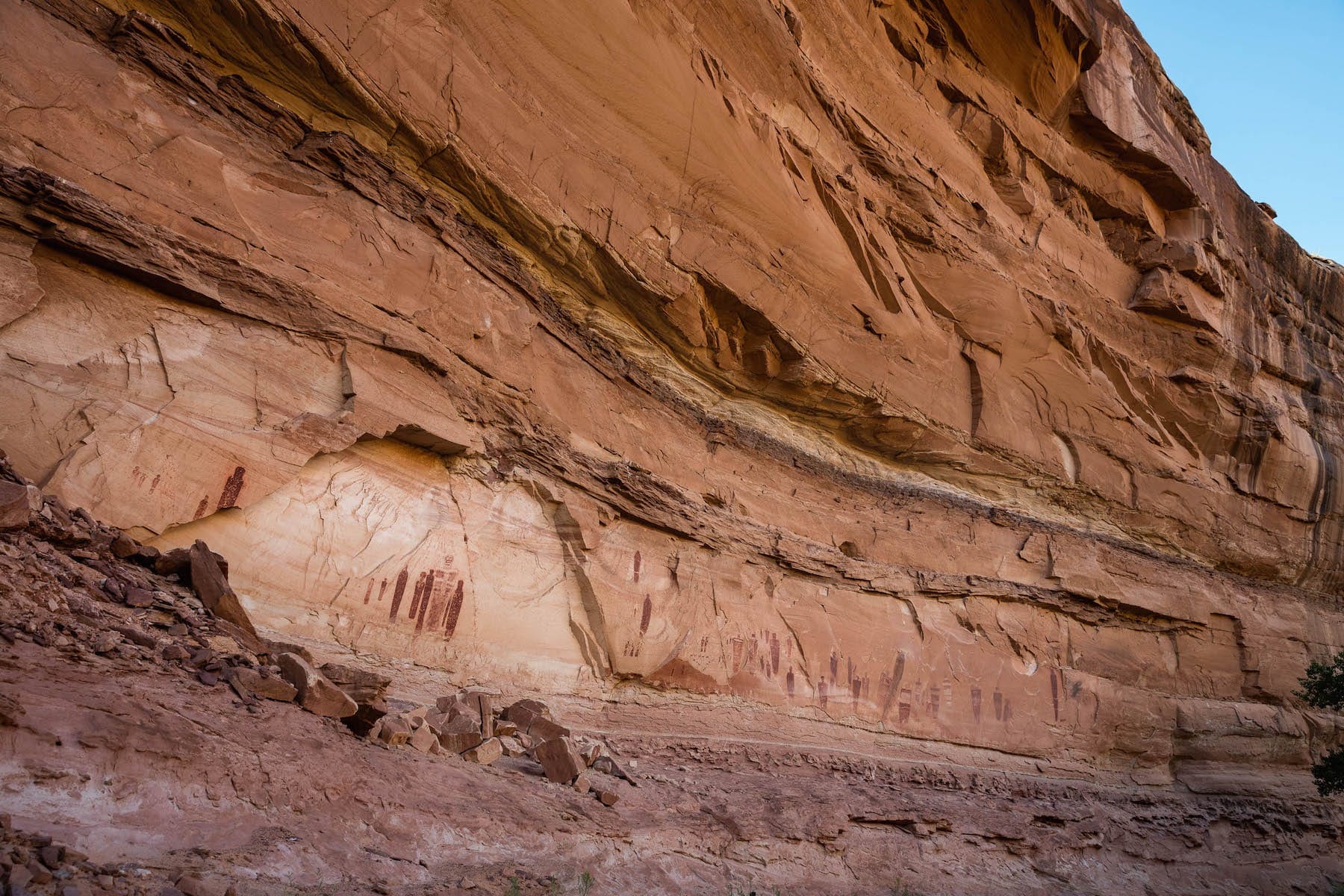 The Great Gallery of Horseshoe Canyon.

We live in a fractious and fractured world. Alvarez believes that any project that emphasizes our shared history is helpful and that it is critical that we understand the deep history of art. “It’s tied to our survival; it’s the one thing no other animal tried. We began to make symbols, and it did something for us. Art still does something for us, and it is the thing that draws us back together.”

In response to this brand new discovery in the Unnamed Caves initiative, Alvarez remarked, “It’s 2017. To see something new is extraordinary.” Indeed. Even though all this may be, as he said, just what he does, Stephen Alvarez knows that he has experienced so many extraordinary things, and he knows the value of those experiences. He is working assiduously not only to protect the art that he believes is our common ancestry, but to expand its reach to the rest of us, and that is something extraordinary.

Alvarez, who will be joined by Simek and Cressler, will be in Atlanta to talk about his work and new discoveries on Wednesday evening, June 28. ArtsATL is sponsoring an invitation-only event hosted by ArtsATL contributor Donna Mintz. Contact her if you are interested in attending.