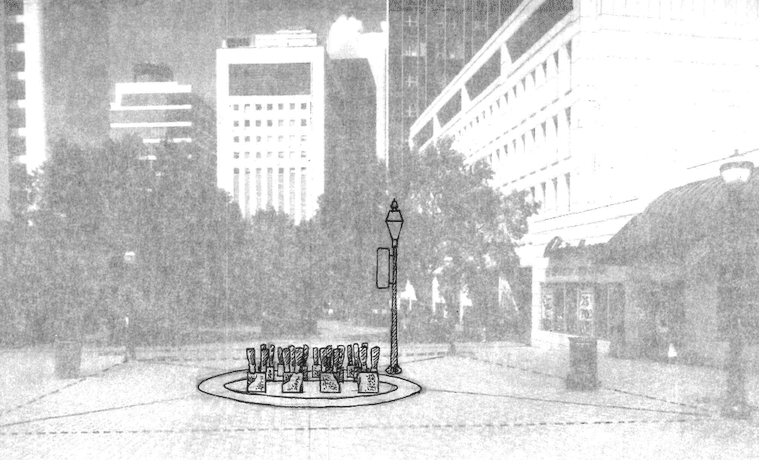 The public installation "Blocked at Five Points," seen here in a schematic drawing, is how artist Masud Olufani would commemorate the men, women and children sold as slaves on the block where the downtown MARTA station now sits.

Masud Olufani was hosting and narrating When Georgia Howled: Sherman on the March in 2016, a documentary series for Georgia Public Broadcasting and the Atlanta History Center. That’s when he saw a photograph of the Crawford Frazier Negro Brokerage House. The archival snapshot, taken during Sherman’s occupation of Atlanta in 1864, triggered a broad spectrum of emotions in Olufani, a multidisciplinary artist, actor and writer whose site-specific installations, sculptures and works on paper are meditations on memory and meaning. 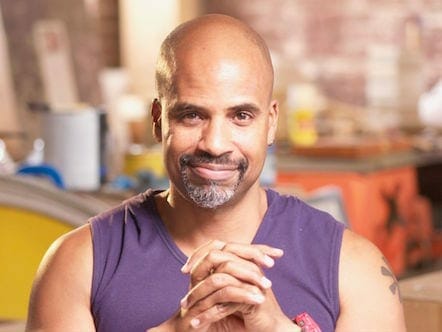 Multidisciplinary artist Masud Olufani wonders if Atlanta has become the City Too Busy to Remember.

Olufani was appalled by the casual barbarity of a hand-painted sign that read “AUCTION & NEGRO SALES” at the entrance to No. 8 Whitehall St. When he learned that MARTA’s Five Points station is on the same city block where men, women and children were once sold — with no acknowledgement of what had happened there — he was shocked by the willful erasure of what he considers a sacred space.

“As a student at Morehouse in the mid-’90s, I used to commute to and from the Five Points station every day,” he says. “I couldn’t believe the city didn’t contextualize this history with a marker, if not something more substantial, and decided I wanted to provide a work of art that would not only preserve the memories of enslaved people, but humanize them.”

Olufani proposed a public art installation titled Blocked at Five Points to the Mayor’s  Office of Cultural Affairs. He planned to build 12 rebar-enforced limestone blocks inscribed with the names and prices of specific individuals sold at the brokerage. A pair of bronze feet would crown each block. An inlaid tile ring would encircle the stone grouping and a vintage gas lantern — with an engraved bronze plaque showing a newspaper article about the sale of “healthy Negroes” — would complete the design.

Olufani, now 51, recently spoke to ArtsATL about the genesis of Blocked at Five Points, the subsequent stall that has him wondering whether Atlanta is the City Too Busy to Remember and the logic of coming to terms with our past.

Masud Olufani: I staged a performance piece called Blocked at Five Points at the Atlanta Contemporary Art Center — where I was a visiting artist — in 2016. The multimedia piece combined a 15-minute video loop of commuters in front of the Five Points station with an overlay of the Crawford Frazier image floating in and out, like a ghostly residue of the history of that space. As the film played on a jumbotron screen, a pair of singers mounted two auction blocks I’d constructed in front of the screen and began to sing a medley of Negro spirituals.

ArtsATL: Immediately after, supporters came your way. Who were some of them?

Olufani: Carl Rojas [connected to the digital art magazine Burnaway] saw the live performance and became a lead protagonist among a coalition of people with connections to the arts and government communities to present Blocked at Five Points as a permanent installation for the city. The Mayor’s Office of Cultural Affairs approached me about doing a temporary installation as part of ELEVATE, its public art program. President Paula Wallace at SCAD offered to fund the entire $100K cost of the permanent installation and pay to insure it for 20 years. The Atlanta History Center pledged to donate a 19th-century gas streetlight, which was an integral part of my design. And Congressman John Lewis gave us a written endorsement, consenting to having his feet cast and stated this had to be done in Atlanta. Then the project stalled.

Olufani: I’m not a politician, I don’t know all the inner workings of the politics and I don’t want to be in those halls. [Laughs] I’m an artist. I work with signs, symbols, metaphors and allegories. My primary interest was in seeing the history of 8 Whitehall St. noted in some significant way. SCAD is still very interested in the project and our coalition of supporters has not diminished.

ArtsATL: Do you think the massive shift in consciousness in the past several months might accelerate your project?

Olufani: Yes. It think he killings of George Floyd and Ahmaud Aubrey have brought us to an inflection point. Monuments are coming down that have been with us for so long. Kehinde Wiley’s sculpture, a powerful historical corrective to monuments that institutionalize the notion of the heroic white racist separatist, is up in Richmond. And conversations and coalitions are developing among disparate groups that look like the United Nations.

I lived through the riots after Rodney King [in Los Angeles, 1991] and Amadou Diallo [in New York City, 1999], but this one feels different. We are really at a powerful moment of possibility, particularly among young people . . . who want to see a different nation with a mature consciousness and deeper sense of justice and equality. 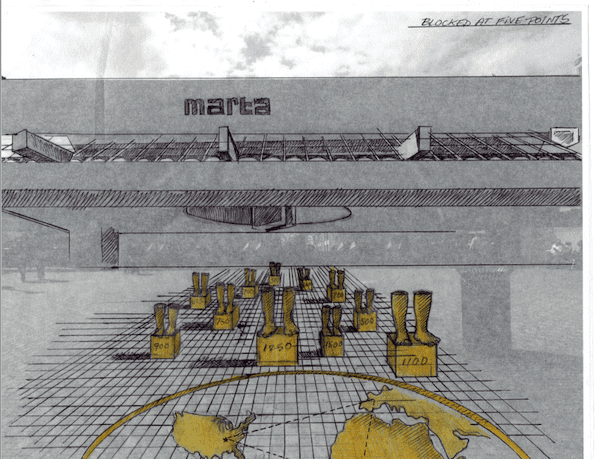 This “Blocked at Five Points” rendering — facing away from Marietta Street N.W. and toward the MARTA Five Points station — depicts the 12 limestone blocks and the bronze pairs of feet. The vintage gas street lamp would stand to the right.

ArtsATL: Most of your art practice is predicated on the value of memory and truth-telling. Why?

Olufani: I think of the truth, or reality, as the basis for all virtue and character-building. You cannot build a strong character if you’re not operating from the basis of truth. You can affect an appearance of love, mercy or courage, for example, but if it’s not grounded in truth it is a fallacy . . . a lie. Truthfulness has to be the pre-eminent virtue that we start from in order to build substantive relationships with ourselves, one another and the broader community. Failing to do so comes at our own risk.

ArtsATL: What would you say to detractors who refuse to reckon with a past for which they are not responsible?

Olufani: In her new book, Caste: The Origins of Our Discontents, Isabel Wilkerson compares America to an old house. Looked at in that context, whether you have a direct connection to the history of slavery or not is a moot point. By virtue of being a citizen in this country, you are an inheritor of this old house and share the collective responsibility to make sure it is structurally sound. We have been operating from a place of shame — trying to keep our past buried — and the effort is overwhelming and paralyzing us. The only way to achieve moral consistency between the image this country paints of herself and the facts of who we are is to reconcile our past. That’s the sign of a mature democracy, and the only logical path to avoiding the burden of obfuscations, justifications and rationalizations for the parts of us that aren’t so pretty to look at.