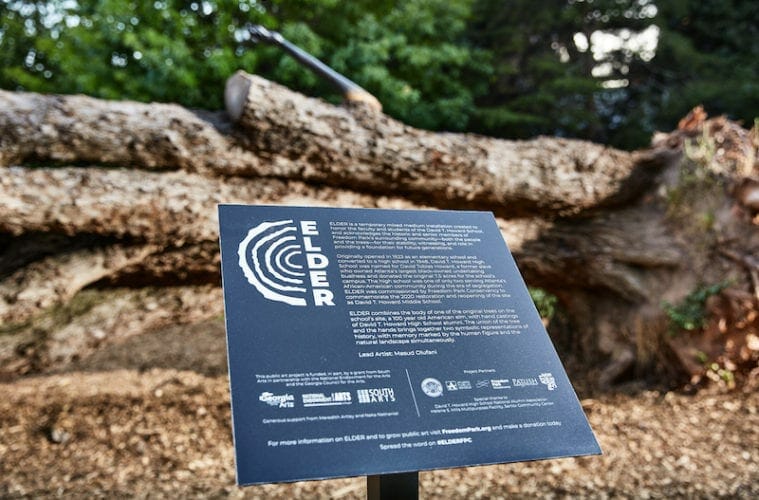 Freedom Park has been home to Atlanta’s most iconic sculpture since 1992, when Spanish sculptor Xavier Medina-Campeny’s Homage to King, a profile of the Rev. Martin Luther King Jr., was installed at the southwest corner of Boulevard and Freedom Parkway during an Olympic cultural exchange.

The idea for ELDER grew in anticipation of this summer’s reopening of David T. Howard Middle School, named for a former slave who prospered as proprietor of Atlanta’s largest black-owned undertaking business. He donated the campus’ original 7.5 acres at Randolph Street and John Wesley Dobbs Avenue. It opened as an elementary school in 1923, and its alumni include former Atlanta Mayor Maynard Jackson, civil rights activist Vernon Jordan and King. ELDER combines the trunk of one of the site’s original trees, a 100-year-old American elm, with hand castings of Howard High School alumni. It features 10 outstretched, life-size arms carved from basswood and buckeye, and hands cast in aqua resin. They come in postures that suggest giving, receiving, supplication and resolution.

Olufani says he hopes his sculpture will help viewers reimagine elder populations — he calls them “mobile libraries of living memory” with fresh eyes.

“We have a fascination with youth in the West,” he says. “But among indigenous communities around the world, the two groups that are most revered are the very young and the very old. The main function for those of us who occupy the in-between space is to prepare a world for the very young and work to honor the very old. If we take the time to see our elders and stay open to learning from them, maybe we could chart a better course to a brighter future for everyone.”

When Olufani describes his response to the felled elm that anchors ELDER, he might as well have been talking about the beloved elders of any community

“When I touch these old, living forms that have been around for so long, it feels like meeting a matriarch or patriarch,” he says. “I’m meeting a symbol of dignity and nobility — something that has been set in our physical reality to remind us of virtues like endurance, perseverance, wisdom, patience. As I looked at the lines, the bark and the things that have been absorbed by the tree, it affirmed nature’s dominance over our manmade physical space.”

Olufani found that the casting of hands of Howard school graduates — the eldest was a 92-year-old woman who attended with King — illuminating. He describes them as “cultural historians,” a civic-minded group whose school pride stems from the love, support and encouragement they received as students growing up in the segregated South.

Plans for an official unveiling of ELDER have been postponed until social distancing protocols for Covid-19 have been suspended in Atlanta, but that hasn’t stopped community members from engaging with the piece. Little offerings have been placed in the sculpture’s hands and visitors are encouraged to take photographs and share  thoughts about their elders on social media using the hashtags #ElderProject2020, #PublicArtATL and #ELDERFPC. “Masud’s investment in memory, witness, gesture and inquiry made him a natural fit for this project,” says Nancy Boyd, arts committee chair of the Freedom Park Conservancy Board. She’s hopeful that ELDER’s tenure in Freedom Park might be extended beyond October.

“He brought integrity, character, creativity along with his extraordinary talent as a writer, actor and journalist to the project,” she says, “and responded to the subsequent shifts, turns and many changes with grace. That part of working with Masud allowed the project to grow and allowed the sculpture to unfold with an equal measure of grace.”

Freedom Park, a forerunner to the Atlanta BeltLine, is an early example of how environmentalism, urbanism and historic preservation helped people reimagine what to expect from public spaces. The 200-plus-acre linear park was born through community activism — the Georgia Department of Transportation envisioned a toll road there in the 1960s.

Now it connects eight neighborhoods, offers six miles of biking and walking trails, and is a wildlife sanctuary with a bird and butterfly garden. The Atlanta City Council designated the green space Atlanta’s Public Art Park in 2007.

ELDER is the Conservancy’s first public art commission, and represents an important shift for the park. It has six permanent installations and has hosted public art since its first installation in 1996 — Wire Tornado by Canadian sculptor Evan Levy. ELDER seems to signal Freedom Park’s intent to expand its role in Atlanta’s arts ecosystem.

“For us, ELDER is like turning over a new leaf,” Harriet Lane, chair of the Conservancy Board, said in a statement. “Freedom Park has an important legacy in the areas of art, activism and nature, and by increasing our capacity to commission public art, we get to reinforce that legacy. ELDER is an important first step.”