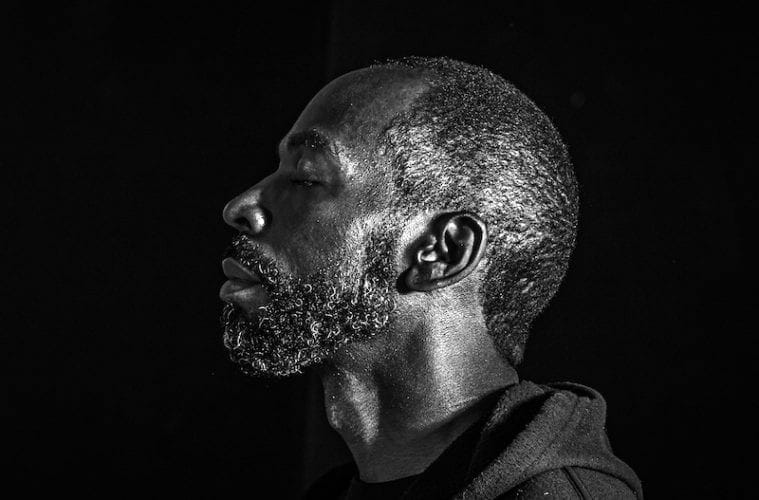 Documentary filmmaker William Feagins Jr. moved from Pennsylvian to Atlanta for a graphics design job in 2009 -- then began seeking out the city's creative neighborhoods. (Photo by Jonathan Journey)

Q&A: “It’s important for us to tell our own truths,” says filmmaker William Feagins Jr.

You could sense a hesitant smile as Will Feagins recited the intro/outro-style of his Atlanta docuseries the way he’s asked dozens of creatives since 2018. Now in its third season, Our Voices. Our Lives features artists and entrepreneurs of color who discuss what differentiates them from others, the influence of community on their work and more. 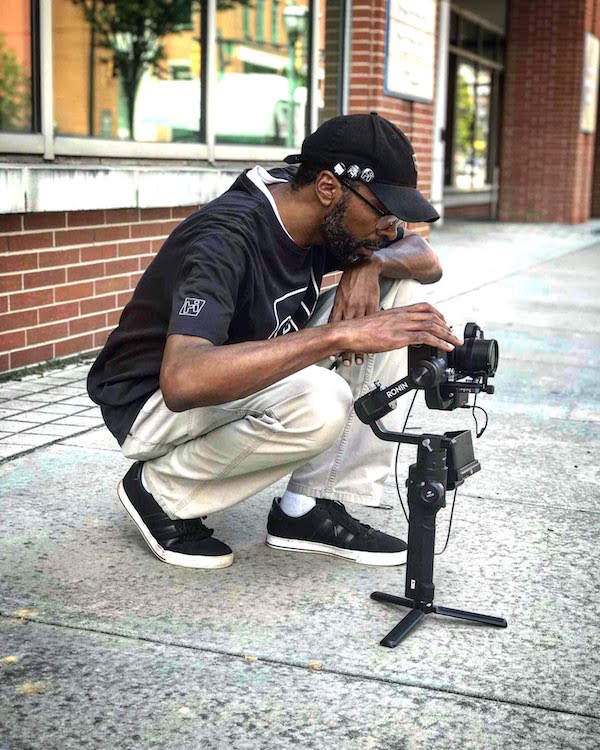 Will Feagins Jr.’s docuseries “Our Voices. Our Lives” features artists and entrepreneurs of color discussing their work and their lives.

There’s an innate humility and kindness to this 48-year-old Pennsylvania native. His corporate graphic design job moved him to Atlanta in 2009. Which also meant he had to stop borrowing a friend’s camcorder and buy his own. He printed Yahoo maps and discovered creative communities.

Primarily self-taught, Feagins honed his indie film calling with his own company, wfjrFilms. He’s produced Heaven Can Wait: The Story Behind the Wall, Change in the Game, which was an Atlanta Film Festival selection; UNDEREXPOSED: Indie Hip-Hop in Atlanta, a Creative Loafing ATL Short Cuts contest winner; and various music videos.

Recently, Feagins spoke with ArtsATL about this project, why he’s more comfortable spotlighting other creators and being a self-proclaimed digital hoarder with a drone.

Feagins: The major influence is that I’m an introvert. The way I communicate with people en masse is through creative means. When I was younger, I wrote poetry. I’d be the DJ and produce music for my rapper friends. I actually wanted to be an audio engineer. I attended the Art Institute of Pittsburgh and an intro to desktop publishing course ignited my interest in graphic design. After seeing a DVD of a rapper’s poetry performance, I was inspired. I knew what I wanted to do. I could see it my head. I couldn’t always communicate it verbally. I convinced a friend to let me make a documentary about him.

ArtsATL: What is it about storytelling that moves you?

Feagins: The curiosity of people and their processes. I’m a people-watcher. In my films I want to understand people’s motivations because none of this [life] is easy. I wonder what drives people to continue to do anything outside of their regular lives. I want to hear people’s stories that could often go overlooked. I want to share stories of those people who are, in a way, like me. Those of us who only appear to be the “underdog.” Just because people aren’t famous yet doesn’t mean their experiences or lives aren’t worth sharing.

ArtsATL: What’s the premise behind Our Voices, Our Lives?

Feagins: The original idea in 2016 was to have a discussion around certain topics. I’d interview eight to 10 people. The first interviews focused on being a Black woman in today’s society. That’s where the title Our Voices, Our Lives came from. Eventually a friend’s music-centered cable channel was looking for short content. I figured people would expect a musical artist. To be different, I reached out to an audio engineer, then a dancer. The cable-channel shorts didn’t happen. I kept going with the concept. In 2018, I told someone I would focus primarily on people of color. That person told me that my idea was good but just make sure it’s not too Black. Just because I’m focusing on Blacks and other people of color people doesn’t mean the quality’s going to be any less in any way. Not the story, not the visual aspects, not the audio. In all I do, I want to present people in the best possible light to get rid of attitudes like that. 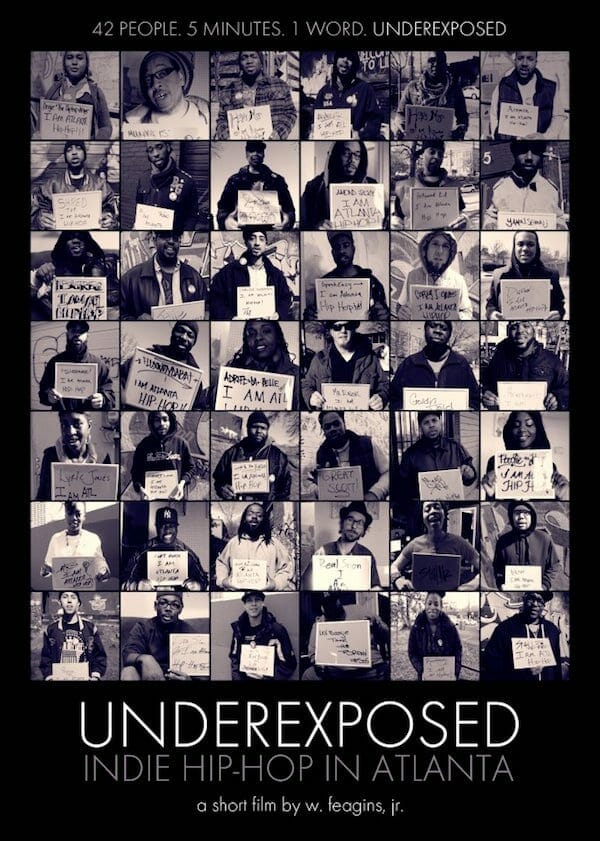 ArtsATL: Why did you create the special episode Blackness?

Feagins: I had produced two short films for the National Black Arts Festival’s Drive-In Film Festival, Amare: To Love [held July 2020], and they had an extra time slot. I thought of the visual artists I had interviewed. I already wanted to do something that would tie most of the previous people I interviewed into one piece. I thought about asking what “Blackness” means to them and how they portray it. With all that’s going on in the country, I thought, why not show them doing what they do as opposed to a composition of talking heads and B-roll? I spent a weekend going through footage from interviews, some of which didn’t make the final cuts. This is also kind of a call back to the original format of several interviewees discussing one topic.

ArtsATL: Why the interest in indie documentary film shorts?

Feagins: I always wanted to consistently produce something. I have a friend, Dan Flores [aka DaCreativeGenius] who draws every day. While I couldn’t produce a film every day, I started biweekly. I got impatient. It turned into a weekly thing. For Our Voices, Our Lives, I started doing seasons. Twelve episodes for Season One, 18 for Season Two. I was up to about 19 for the third season before the pandemic hit. I’m creating short films because there are so many stories out here. I don’t buy into our attention spans being shorter or anything like that. I mean, The Avengers movie was almost three hours long and sold out.

ArtsATL: How do you approach filmmaking?

Feagins: When I come across someone I think is doing interesting work, I share. I’ve gone to art shows, for instance, and been blown away by the work. It’s easier for me to show you. I want people to tell their stories in their own words. My fingerprint on their lives should be barely visible. I can show their process and how amazing they are. I know what it’s like as an entrepreneur trying to follow your dreams. This system isn’t really set up for us to do that. I want to promote and magnify voices.

ArtsATL: What’s at the heart of your feature films?

Feagins: I chip away at stereotypes. When it comes down to it, most people can relate. There’s not a lot of positive, fatherhood imagery when it comes to hip-hop artists. Divided Time came about because I’ve seen loving fathers who interact with their children. At the core, it’s making decisions and sacrifices. I didn’t want the flip side of that film when I created The Possibility of Her. I focused on women in nontraditional roles and careers. Have they come far or are they still dealing with some of the same things that their mothers, grandmothers or great-grandmothers dealt with? Regardless of the topic, people can determine if they’re just carrying around a notion of how life’s been. 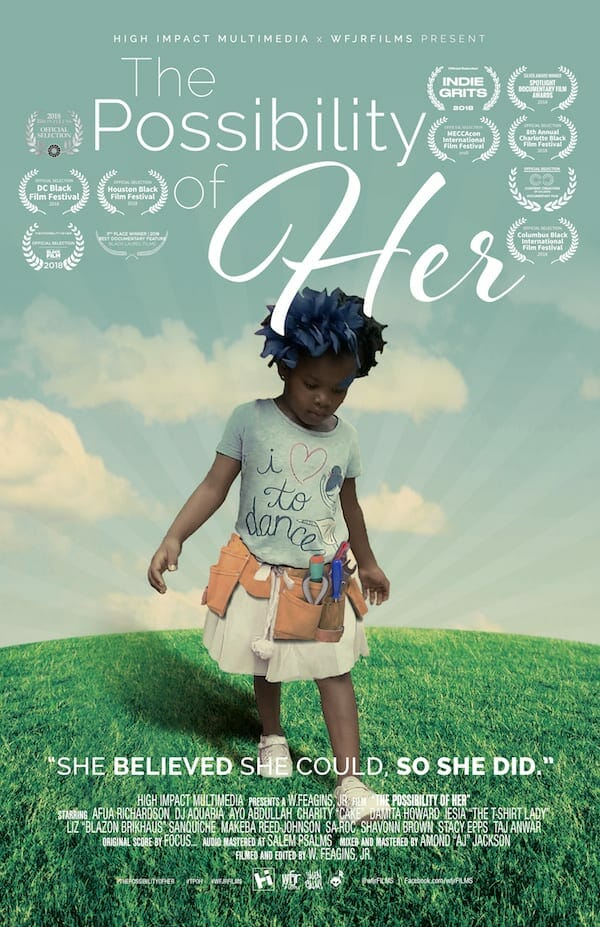 “The Possibility of Her” is a feature-length documentary from 2018 that highlights 12 women of color who are actively involved in nontraditional careers or passions.

ArtsATL: What’s your “state of America” to Black creatives?

Feagins:  It’s more important than ever to tell our own stories and document our own lives. It’s important for us to tell our own truths because nobody else is going to. We’ve got to continue to create, document and share. And to the youth who want to create, don’t downplay your passion. I told my high-school guidance counselor that I wanted to be a commercial artist. He steered me to science and math because I had good grades. It took me years before I actively pursued this passion. Don’t take “no.” Unapologetically go for it.

ArtsATL: How has family helped shape you?

Feagins: I attribute my creative side to my mom. When I was growing up, my mom drew sketches of me and other people and things. It wasn’t until I visited her years ago that I’d found a box of poetry she’d written. My dad passed in 2001 and I’m intentional about keeping the “junior” in wfjrFilms in tribute to him. We had our ups and downs. This honors and shows his efforts weren’t in vain, that I’m making a positive impact on people.

ArtsATL: How have you kept ideas flowing during the pandemic?

Feagins: I’ve thought about drawing, but I think that’s the cabin fever talking. My latest social-distancing hobby is a drone. People take images of beautiful beaches or mountain scapes. But what about the cityscape? I’m showing (safely and legally) the beauty in urban settings. I watch cartoons like The Amazing World of Gumball and Cupcake and Dino. They’re preposterous. That’s why I like them.

ArtsATL: Do you have any favorite collections?

Feagins: I’m a digital hoarder. An old camera, discs, multiple hard drives. It’s not 1989. I really don’t need Photoshop 5. And band T-shirts. Most are so old that the groups aren’t together anymore. OK, call me a sentimental hoarder, too.