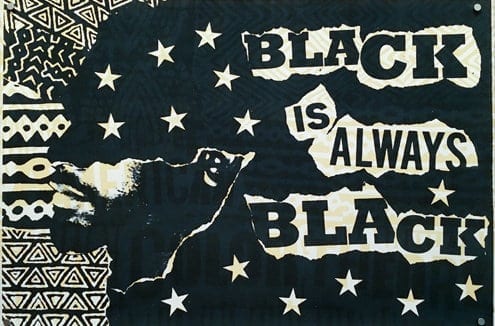 In Black Looks: Race and Representation, African American cultural critic bell hooks reminds us that “a fundamental task of black critical thinkers has been the struggle to break with the hegemonic modes of seeing, thinking, and being that block our capacity to see ourselves oppositionally, to imagine, describe, and invent ourselves in ways that are liberatory.” hooks is concerned with the black image: how black people see themselves, how they’re depicted by society and how black images are consumed across various media. 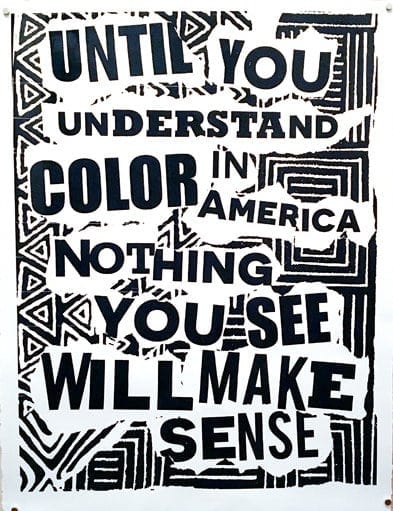 This preoccupation with the black image is even more prevalent now than it was 26 years ago when hooks first published her seminal text. I thought viscerally about hooks’ reference to “modes of seeing” as I experienced Jamaal Barber’s first solo exhibition, Bright Black, on view at Atlanta’s Southwest Arts Center through February 23. In a carefully curated sequence of woodcuts and screenprints, Barber attempts to break open those “hegemonic modes of seeing” that hooks describes by heeding the dissonance between race and color, between looking at and being seen.

From what we know, race is a social construct, a fiction. In spite of this, race has real-world consequences in the way we live our lives, how we experience history and the ways we interact. As Barber elucidates in his work, so much of how we experience race is affected through the act of seeing and identifying color.

Though formally trained in graphic design at East Carolina University, Barber is primarily a self-taught printmaker who has been honing his craft for the past five years. Barber’s screenprints are some of the most complicated and evocative works in the show, as they most explicitly touch upon the line between race and color. Engaging color theory, the study of using and mixing colors, Barber builds upon what he calls “the American Color Theory.” In a combination of images and phrases, these screenprints demand a recognition of race and how it is used to wield power over certain narratives of people of color. 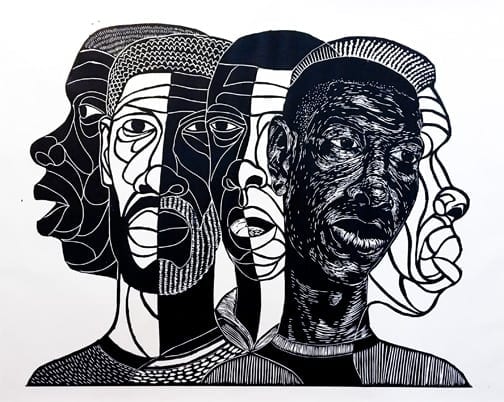 Most of the pieces in the show play with the use of black and white, but also — quite literally — the lines that bleed in between the two. The Council, a woodcut print, is at face value a portrait. There’s a black male figure appearing in the foreground in front of others that have black and white faces, suggesting a troubled duality or multiplicity of identities. In Redlining, Barber interrogates social and physical restriction with four panels of black woodcut portraits of four individuals of various ages. Above or below each portrait is some assemblage of burlap, rope, metal and cotton, and in front of each portrait is a red wooden gate that partitions the viewer from the portrait. In the United States, “redlining” refers to the act of denying services, directly or indirectly, to communities of color. Redlining made it difficult for black Americans to take out mortgages, to purchase equitable health insurance and to borrow money to start or sustain businesses. Though we may prefer to believe that redlining is a thing of the past, it’s still deeply embedded in current gentrification practices, real estate developments and the zoning of school districts. In a city such as Atlanta, we don’t need to look far to see how longtime black residents are being displaced to make way for high-rises and the growing mass of millennials moving into the city to take advantage of Atlanta’s growing economy. 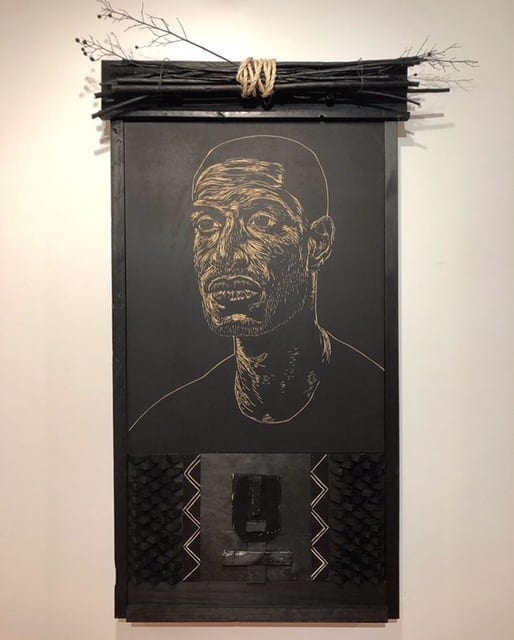 The gate seemingly expounds on the manner in which black pain is put on display. Despite the fact that blacks have been systematically pushed to marginal areas of cities, the trauma that black communities repeatedly face has never left the American stage as spectacle. In the same way that the red gate separates the viewer from the viewed, the accompanying rope, cotton and metal invokes violent and traumatic histories that many white Americans too often disregard. While these relic reminders of systematic brutality and socioeconomic theft are ingrained into the psyche of black America, white people can conveniently choose when to acknowledge such histories. In this way, the red gate is a metaphor for the way in which blackness is controlled and contained by the white imagination, from behind a safe partition. 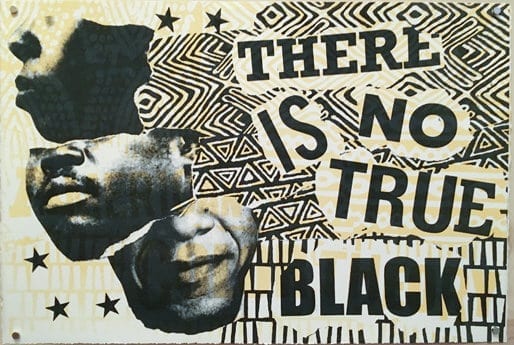 At the core of Barber’s theory is his statement: UNTIL YOU UNDERSTAND COLOR IN AMERICA NOTHING YOU SEE WILL MAKE SENSE, which also becomes the thematic thread for 11 serigraphs entitled American Color Theory in which the artist seems to insist upon reaching into the American psyche to push back against the notion of a “color blind society.” Two of the starkest proclamations from this series, BLACK IS ALWAYS BLACK and THERE IS NO TRUE BLACK, encourage us to ask ourselves what we demand of blackness. The former seemingly invokes an up-close view of the African continent that includes the lower half of a black man’s face as part of the geographical landscape. The latter suggests this same shape of the continent but uses the lower portions of three faces that including the likenesses of Marcus Garvey and Barack Obama to finish the outline of the West African coast. 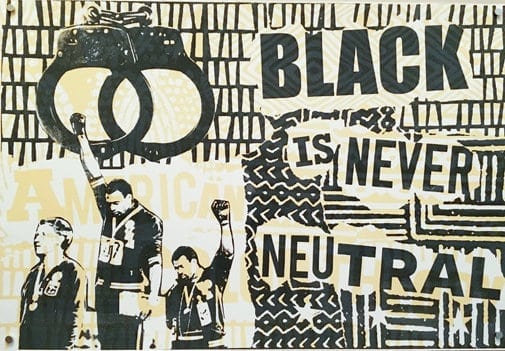 Barber counts among his influences Emory Douglas, Minister of Culture of the Black Panther Party. Like Douglas, Barber maintains a radical social consciousness that is hardly invested in ideas of middle-class complacency. Even for those of us who have an acute understanding of race, Barber’s American Color Theory pushes the boundaries of what race means at its most basic level of seeing and being seen. For it is always the act of seeing that determines one’s actions. 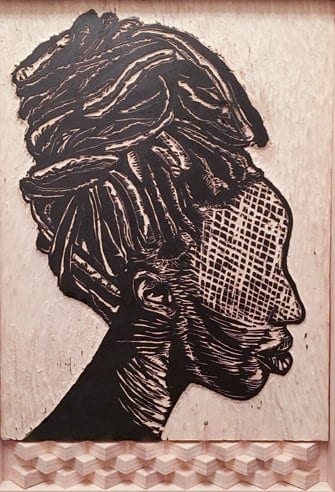 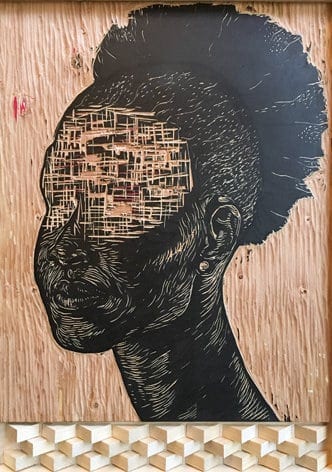 The exhibit closes with two pieces from Barber’s Identities series. These woodcuts feature profiles of black women whose eyes are veiled. The titles I am… and I could… allow viewers to complete the statements themselves, or rather, to try to lean into the dissonance that the incomplete thoughts invoke. Unlike the portraits, most of the exhibition’s final pieces consist of subjects whose eyes are either covered or not present.

Juxtaposed against the Redlining portraits on the opposite wall, these last pieces from the Identities series speak to black invisibility and black visibility, themes that Claudia Rankine touches upon in Citizen, her 2014 book of poetry. Like Rankine, Barber’s work brings to light the way in which blacks are rendered invisible but are nonetheless hypervisible when white America wishes them to be. Or rather, blackness is hypervisible only when it is not seen as a threat to white wealth, power, privilege and safety. 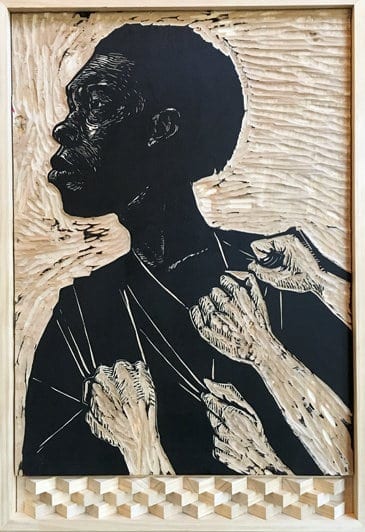 If you stand close enough to Barber’s woodcuts, you will witness the artist’s great attention to detail that makes the image come alive, moving beyond the two-dimensional framework. This is the magic that lies within Barber’s work, to undo the “hegemonic mode of seeing,” to give us a black that’s not blue, but rather a black that is so true to itself, it’s bright.

Only two of the closing pieces contain faces with eyes. One of those, To Be Free, features a black man looking off to the viewer’s left with an uplifted gaze that seems to indicate he is preparing to take off in flight. Pulling at his shirt are four white hands, holding him down as a grim reality. The moment is not a standstill: the man is taking off, transcending the weight of whiteness. His eyes don’t meet the viewers’ for he is unconcerned with that gaze. He looks far beyond, naming.