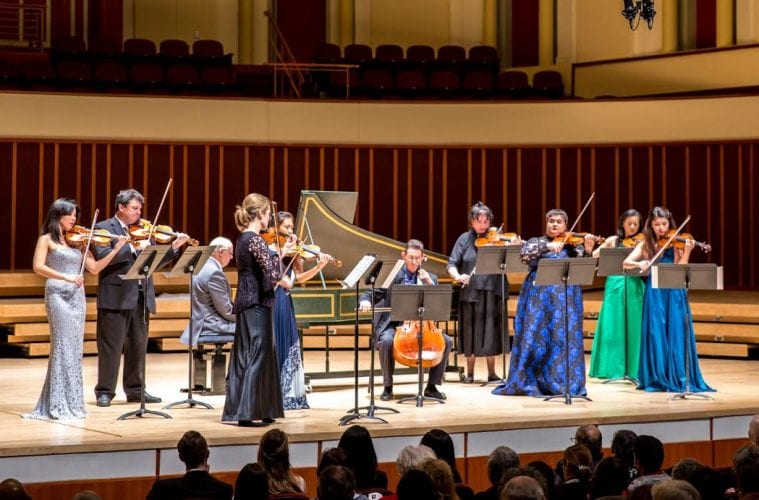 On Sunday evening at Emerson Hall in the Schwartz Center for Performing Arts, the Emory Chamber Music Society of Atlanta presented a musical potpourri by a collection of Atlanta area performers — 25 musicians and one dancer — who are all alumni of The Juilliard School. The group included graduates from every decade from the 1960s through the current one, and all are active in major arts organizations and universities in the greater Atlanta area. Although there are many excellent schools across the United States today, the esteemed Juilliard School in New York owns status as the bellwether of performing arts education in the national public mind.

William Ransom, artistic director of the Chamber Music Society, in his introduction to the concert, called it “a program I have been thinking about putting together for a number of years.” He decided that the chamber society’s 25th anniversary season would be an ideal time, and sought out help from Rebecca Vaccarelli, director of alumni relations at Juilliard, and her team to identify potential performers. “I knew a handful of musicians in the area who were Juilliard alums, but when I started reaching out to find out exactly who was here it was quite amazing,” Ransom said.

Then came the task of matching performers and repertoire. The result was an intermission-less program of nine works, from the Baroque through the late 20th century.

The program opened with the largest ensemble of the evening performing the Concerto for Four Violins in B Minor by Antonio Vivaldi. It featured four solo violinists — Fia Durrett, Julianne Lee, Elizabeth Fayette and Sissi Zhang — backed by a small Baroque orchestra composed of violinists Helen Kim and David Dillard, violists Joli Wu and Marian Kent, cellist Christopher Rex and harpsichordist David D’Ambrosio. It set the tone for the evening of a variety of musicians who came together to celebrate a singular common element in their backgrounds.

After that extroverted opening, a more inward-looking, intimate Baroque selection followed, the “Prelude” from J.S. Bach’s unaccompanied Cello Suite No. 1 in G Major, BWV 1007, performed by cellist Christopher Rex, accompanied by dancer Lee Harper. A native of North Carolina, Harper arrived in Atlanta in 1975, when she was engaged to choreograph a performance of Leonard Bernstein’s “Mass” for the Atlanta Symphony Orchestra.

The dance company and school she subsequently founded has been an active part of the performing arts community in the ensuing decades. Harper has often collaborated with the ASO in events such as their “Symphony Street” children’s concerts. After four decades of professional work in Atlanta, Harper retains a lithe, elegant grace and poise in her performance, in creative symbiosis with the thoughtfully expressive playing by Rex, who retired this month after nearly four decades as principal cellist of the ASO. Rex and Harper returned to the stage, this time with violinist David Coucheron and pianist William Ransom, to perform “Oblivion” by Astor Piazzolla, a slow tango used by Italian motion picture director Mario Bellocchio in the soundtrack of his film Enricho IV (Henry IV). While “Oblivion” has been played by a variety of instrumental combinations, piano trio was the chosen ensemble for the smoldering accompaniment to Harper’s solo dance.

A different combination of musicians — clarinetist Laura Ardan, violist Jessica Oudin and pianist Shirley Irek — came together for a fine performance of three of the “Eight Pieces, Op. 83” — Nos. 5, 6 and 7 — by Max Bruch. Scheduled to follow was “Duo for Flute and Oboe, Op. 13” by Alberto Ginastera (1916–1983), to be performed by flutist James Zellers and oboist Samuel Nemec, but was canceled due to Nemec being too ill to perform that evening. It was replaced by the final movement of Sergei Prokofiev’s Flute Sonata in D, Op. 94, performed by Zellers and Ransom.

Ransom returned to the stage with fellow pianists Keiko Yamashita and Elizabeth Pridgen to play a pair of works for piano, six hands: “Valse” by Serge Rachmaninoff and “Das Dreyblatt” by Wilhelm Friedemann Bach, a grandson of J.S. Bach. The novelty and humor of “Das Dreyblatt” derives from the fact that it is intended for one male and two female pianists, with the man sitting between the ladies but required to reach around the arms and waists of both to play the lowest and highest notes in the score.

There follows from all this a natural question, which asks just why Emory would sponsor a concert by Juilliard alumni. One salient answer comes, again, from Ransom’s opening remarks, where he asserted that, “in a sense, Juilliard and Emory are two sides of the same coin.” Complementary to what Juilliard does, turning out extraordinary top-level performers, Emory’s goal, Ransom noted, is giving high-quality music educations to future audience and patronage — doctors, lawyers, business leaders, teachers and the like — in order to build new generations of music lovers and supporters who will cherish and support both the broad range of classical music and the musicians who perform it.