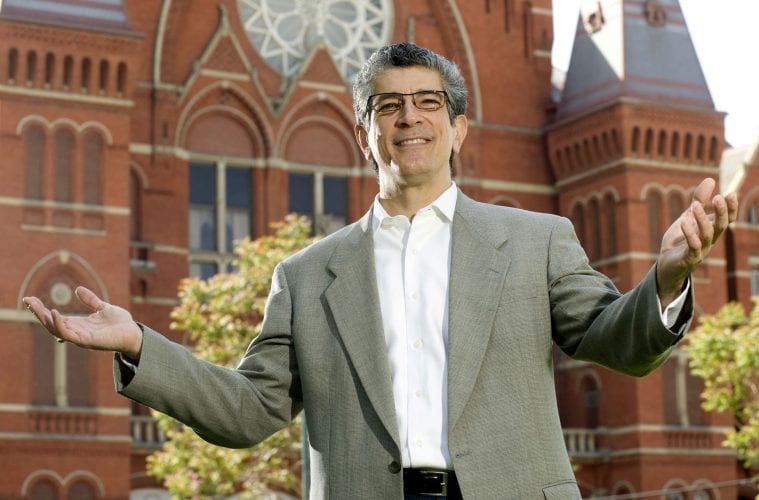 Q&A: Evans Mirageas leaves ASO, he looks to the past and toward the future

Since 2006, Evans Mirageas has been involved in artistic planning for the Atlanta Symphony Orchestra, later ascending into the role as vice president of artistic planning in 2012. The role includes assisting music director Robert Spano and principal guest conductor Donald Runnicles in all creative aspects of the orchestra’s season planning and helping identify the roster of guest conductors and soloists to perform with the orchestra.

This year also marked Mirageas’ 14th season as artistic director of Cincinnati Opera, a part-time position that means dividing time between two cities. Flying back and forth, he’s maintained a balance between time with the ASO during its subscription season and Cincinnati Opera, which mounts its annual season in the summer. “The Cincinnati season ramps up just as the Atlanta season is winding down, so the two can dovetail nicely,” Mirageas previously told ArtsATL.

However, at the beginning of this year’s season, Cincinnati Opera returned with great excitement to its beautifully restored historic home of Cincinnati Music Hall. Mirageas was approached by the company’s general director and CEO, Patricia K. Beggs, who broached the subject of him becoming full-time artistic director. After deep thought and consideration, Mirageas accepted the proposal and will step down from his long-time post with the ASO at the end of the year.

ArtsATL: When posed with making a choice to step down and take on the role of artistic director of Cincinnati Opera full-time, what kinds of feelings about it went through your head?

Evans Mirageas: It was a very difficult decision because I love the Atlanta Symphony Orchestra, my colleagues on the staff, the board members I have gotten to know who’ve been so generous and friendly and of course most of all our musicians and the members of our chorus. Because for the last 12 years I haven’t had to choose between a life equally divided between operatic and symphonic activity, it was tough — because I know the symphonic literature, and I love it. I’ve made friends with so many of the great soloists and conductors who come through here and of course in particular Robert Spano.

ArtsATL:Your professional relationship with Spano has certainly been a long and varied one. How have your paths crossed over the years?

Mirageas: Robert and I have worked together since February of 1990 when he auditioned and got the job as one of the assistant conductors of the Boston Symphony, where I was artistic administrator. After I left the Boston Symphony, and Robert had already gone out to the beginnings of his freelance career, I worked with him as a client in my own freelance business. Then, I worked with him at the Brooklyn Philharmonic starting in 2001. And in 2006, I started working with him here in Atlanta. When I communicated the news of me leaving ASO to Robert, I reminded him that we’re on our fourth of our nine lives as cats and that we have many more chapters to go.

ArtsATL: Being offered to go full-time with Cincinnati Opera, however, obliged you to make an unavoidable hard decision between that and staying on board with the ASO. How did you feel about this decision? After 12 years with the ASO, Mirageas heads north as the full-time artistic director of Cincinnati Opera. (Courtesy of Evans Mirageas)

Mirageas: It was not an easy decision, but I see what is possible in Cincinnati. As I am the artistic leader of the Cincinnati Opera, I think it was a very serious and right question for my chief executive to ask. I’m glad I responded in the affirmative, but I’m also sad. I’ve seen the ASO through good times and very hard times. One of the things I promised myself during the darkest days of both lockouts [in 2012 and 2014] is that I would never abandon Robert and I would never abandon the orchestra while they were going through hell. Luckily we’ve come out of the other side with a stronger orchestra, a stronger board, great executive leadership and playing that simply astonishes me every time I hear this orchestra.

ArtsATL: Since Robert Spano has only a few seasons left as the ASO’s music director, and the fact that a symphony orchestra plans and schedules its seasons several years in advance, it strikes me that whoever replaces you will actually be working on planning for the year after Robert steps down. Is that the case?

Mirageas: That’s correct, which is about the right timing because the 2019–20 season is done. I’ve made all of our commitments: we planned all our repertoire, and all of our projects are in place. It’s a very important season because it’s the 75th-anniversary season. We’re already well underway planning Robert’s and Donald’s final seasons in their current incarnations with our orchestra. Before I leave at the end of December, that season will also primarily be done, with little details to be tweaked. What I call the Legacy Project for both of our principal conductors, and frankly for those people we’re inviting as we look for the new music director, will all be done before I leave.

My successor will have the luxury to come into the job and be able to think about the year after — whether that’s the first year of our new music director in 2021–22 or something of an interim season if the person we choose simply cannot free himself or herself from their existing commitments fast enough. They will arrive with no scrambling, and I’m proud of that. I would not want to leave any job half done. Essentially I’m seeing out the remainder of the current artistic administration, with a new person being able to look to a new era of the orchestra.

ArtsATL: How does that leave the ASO well-positioned in searching for your replacement?

Mirageas: The search will be conducted like any search for a senior-level position. I’m very happy to say that we are in a time in the life cycle of orchestras when there are many talented women and men out there doing this work. All that remains is seeing which candidate clicks with our current team, because as with any job that has an artistic element to it, it’s as much about a simpatico of personalities as it is “can you name the keys of all 27 Mozart piano concertos?” The knowledge is presumed. What is important is whether that person has that connection with the chief executive, with the music director, with the principal guest conductor in our case and understands that this institution has changed dramatically.

It is now a great orchestra that has many product lines. We have our hardcore classical season; we have all of the work that we do in education with the Atlanta Symphony Youth Orchestra and the Talent Development Program; we have a thriving program of popular presentations, some that use the orchestra and others that don’t, but it’s one of the things that is extremely important to the ASO now. We are not just an orchestra that plays 24 weekends of classical music; we’re an orchestra that plays an enormous variety of music and engages an enormous variety of activities in a fairly concentrated period of time.

ArtsATL: You’ve seen an enormous amount of change with the ASO since you arrived here in 2006. I know that this next stage in the orchestra’s life is going to involve a bigger focus on community. What’s that going to demand from your successor?

Mirageas: One of the things that’s easy about that question is that the person in the job won’t have to do it alone. Something that’s beautiful about the variety of the things that the ASO does is each one of those threads has great expertise already in place. He or she is going to be entering an organization that is already highly developed and burning fuel on all cylinders. The person is simply going to have to integrate themselves into an already very exciting team of highly accomplished professionals and provide a kind of leadership and artistic conscience for the institution.

Teamwork is everything here. One of the things that I love so much about the ASO’s War Room process, which goes all the way back to 2000, is the vision of [then ASO president and CEO] Allison Vulgamore — that the program planning, and frankly the entire output of the institution, would not necessarily be democratized but would be turned into a collaborative effort. Because that’s now in the DNA of the institution, I am certain that the new artistic VP, as well as the music director who succeeds Robert, will be chosen in part by his or her ability to embrace the idea that this is an institution of many threads.