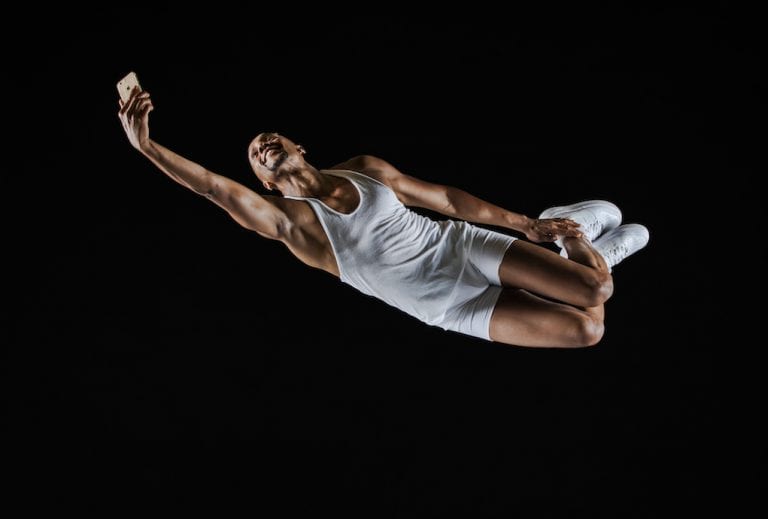 Juel D. Lane’s style and grace have long had the power to melt away stereotypes — particularly of men who happen to be black and gay. In his latest work, The Maestro, a short film making its Afropunk debut today, Lane does it simply by embodying the inspiration he comes by naturally.

In the film, Lane, plainly dressed with his eyes covered as if painted shut, enters a large vacant room. Sunlight greets him, and he’s startled by an old-fashioned jukebox-style radio. He picks up a conductor’s baton, and as he moves, his body seems to absorb an invisible force, like an electrical current, passing between radio and baton.

The film is Lane’s tribute to painter Ernie Barnes, perhaps best known for his painting The Sugar Shack, featured in the opening sequence of the television series Good Times. Barnes, who died in 2009, would have turned 80 this year. The artist’s painting The Maestro inspired Lane’s concept for his choreography and film.

“I’ve seen myself in his paintings,” said Lane. The Atlanta-based dance and film artist, whose work was part of Ailey II’s touring repertory last season, has long identified with Barnes’ colorful elongated human figures. Lane also relates to Barnes’ ability to evoke a sense of community and to communicate feeling through the physical body. These qualities fall in with Lane’s way of putting personal stories into his work.

Lane’s film The Maestro offers a positive and timely depiction of an African American male taking charge of his own destiny, Lane said, and “using his imagination and his body to express himself — and to say, ‘I can go further.’”