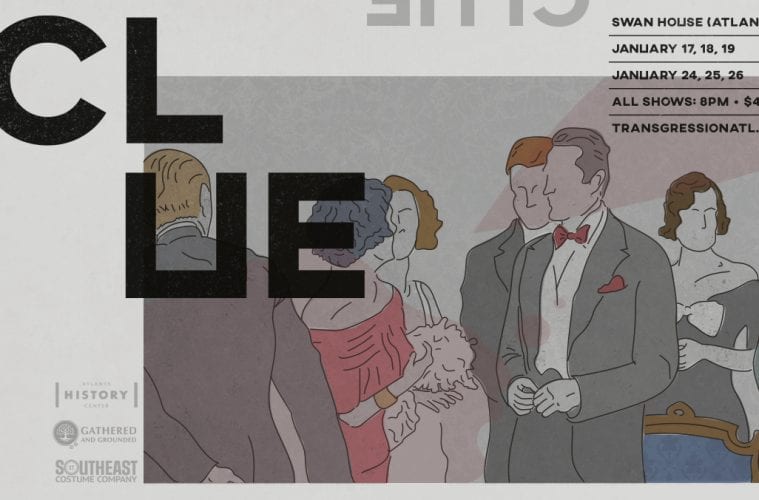 John Carroll, Elizabeth Jarrett and Emma Yarbrough, the team behind Deer Beer Wolf’s Transgression ATL, have a knack for transforming beloved Atlanta landmarks into worlds where fictional characters live and breathe the same air as you. They turned the Margaret Mitchell House into the Darling home for Peter Pan and Urban Sprouts Farm into a magical world for Lost in Oz. Their latest offering, CLUE, will be at the Atlanta History Center’s Swan House, January 17–26 and blends the classic board game’s characters and the film’s slapstick comedy. Like the game, the performance will also have alternate endings on different dates.

“When we mentioned to people that we were going to be working with the Atlanta History Center, we were shocked to find out how many people had never been, despite living here their entire lives,” Jarrett said. “Transgression die-hards are an enthusiastic bunch and will hopefully bring a new audience to the History Center — and the patrons of the History Center can try something new.”

In addition to entertaining History Center guests, the team also hopes that the immersive performance will draw new theatergoers. Yarbrough, who is a co-writer, actor and producer for the production, said the actors will be improvising a lot of their lines. “It’s not the show until the audience is there — it can’t be,” Yarbrough said. “With three different endings and multiple scenes going on at one time, if you came more than once, it would be a different 90-minute experience each time.”

All of the company’s performances incorporate a connection to the city — the Darling children were from Atlanta, and CLUE is set here. The fourth wall will be completely removed, and audience members will be able to join Mrs. Peacock, Professor Plum, Miss White, Colonel Mustard, Miss Scarlett and Reverend Green at Mr. Boddy’s (permanent) retirement party. That kind of mystery and magic is what keeps the team at Transgression ATL going.

“When you were a kid, you believed in magic,” Carroll said. “Now more than ever we need stories to take us to fun places. We need the escape.”